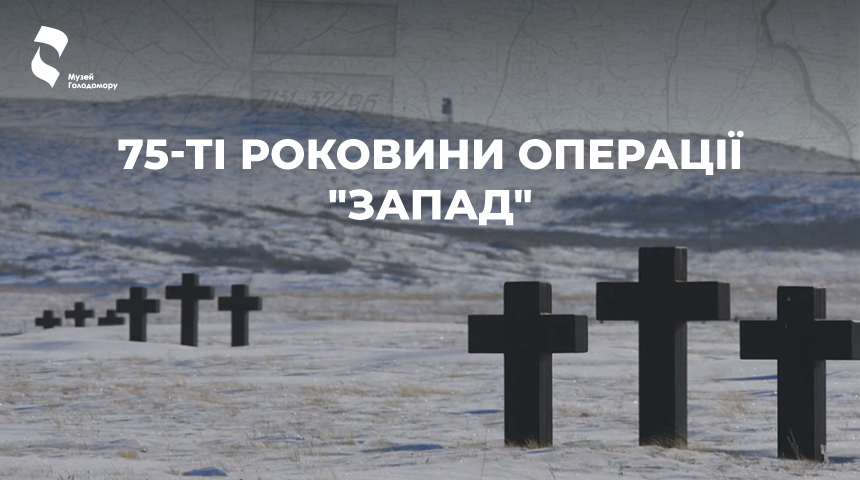 On October 21, 1947, the infamous Operation “West” began. The Soviet regime committed another crime against Ukrainians: in just one day, almost 78,000 residents of Western Ukraine were deported to Kazakhstan and Siberia.

One of the main goals of the criminal operation was to neutralize the activities of the Ukrainian insurgent army and those who sympathized with it and helped it. Therefore, families of the UPA members, residents of villages who supported the rebels, and all those who were considered “unfortunate” were among those deported. Mostly they were women, children, and elderly.

They prepared the operation in complete secrecy: on the ground, they learned about it in a day or two, and often on the day of the operation. So that no one could hide and escape from the participation predetermined by the Soviet regime.

Ivan Boyko was 14 years old when he and his father were deported to Kazakhstan – his older sister was a liaison officer in the UPA. “They knocked on the door early, entered the house, read the verdict,” he recalled in the documentary film “Three Ivans. Stories of Ukrainians in Kazakhstan”. – We were gathered near the village council and, then – in a goods wagon and taken further and further. All the way to Karaganda. The whole of Western Ukraine was deported. The doors were closed, and the windows were closed. They were driven like cattle”…

The road was long and hard – almost two months. There was not a family, eyewitnesses say, in which someone did not die from cold, hunger and diseases on the way. When we got to Kazakhstan, it was already December. Often, the deportees were unloaded simply in a clean field in the middle of the snow, wind and bitter frosts – survive as best you can… They dug dugouts in the frozen ground, using whatever they could: some with a spoon, some with a bowl, some with a found stick. Many were sheltered by former dekulakized Ukrainians from Donbas, who were sent here in the 1930s, as well as the local population. In the archives, it was possible to find a figure that 10,000 people died in the first winter alone out of the total number of people who arrived in Kazakhstan.

Operation “West” became one of the most massive deportations of Ukrainians organized by the communist regime. It covered Volyn, then Drohobytsk, Stanislavskyi, Lviv, Rivne, Ternopil and Chernivtsi regions. In the “Information on the number of families of active participants…” dated May 27, 1948, provided by the Ukrainian Institute of National Remembrance, there are 26,332 deported families – 77,791 people. Of these – 18,866 men, 35,685 women and 23,240 children under 15 years of age.