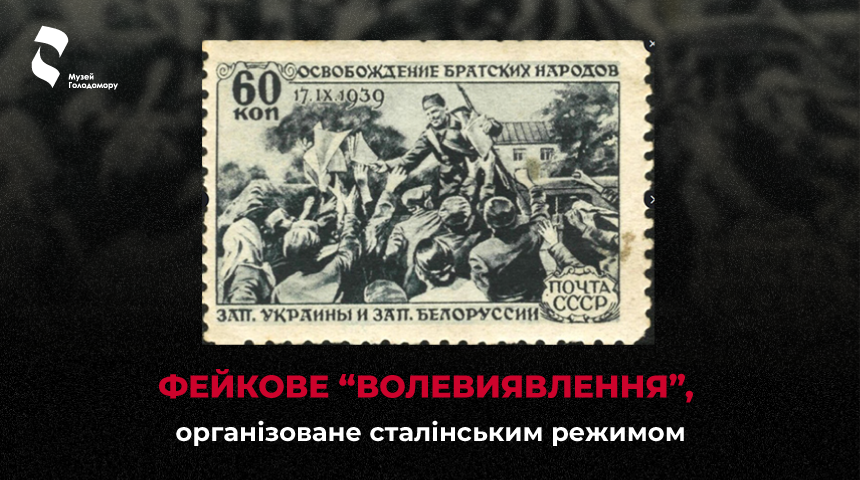 A fake “show of will” organized by the Stalinist regime

One of the characteristic features of the USSR was the active use of propaganda. The regime tried to legitimize aggressive policy organizing and spreading information about various types of pseudo-willing. Having a successful experience of distorting and concealing information during the Holodomor, communist propaganda continued to bring “the truth to the masses.”

The so-called “reunification” of western Ukraine was also a massive propaganda campaign. A new territorial gain for the Stalinist regime became possible thanks to cooperation with Hitler’s Germany. The document that recorded this cooperation was the Molotov-Ribbentrop Pact of August 23, 1939. Until the end of the 1980s, the USSR denied the conclusion of a secret protocol on the distribution of “spheres of influence” to the Molotov-Ribbentrop Pact.

In many ways, the theatrical event in the autumn of 1939 was the resolution of the declaration of the People’s Assembly of Western Ukraine on October 27, 1939. The hastily assembled “chosen ones” “asked” for the inclusion of Western Ukrainian lands into the Ukrainian SSR. The deputies were elected using Stalinist methods: under pressure and fear of reprisals.

This “legitimization” of Soviet power in Western Ukraine entailed arrests, deportations, and executions… The Stalinist regime used the terrible experience of the 1930s, this time carrying out forced collectivization already in Western Ukraine.

When Putin arranges fake referendums in the occupied regions of Ukraine today, he does not invent anything new. However, he only uses the methods of Stalin, who legitimized the annexations of 1939 according to a similar scenario. By the way, Bolshevik propaganda called those events the “liberation of brotherly peoples” (Ukrainians and Belarusians). Modern Russian propaganda also calls the current war of aggression “liberation”.