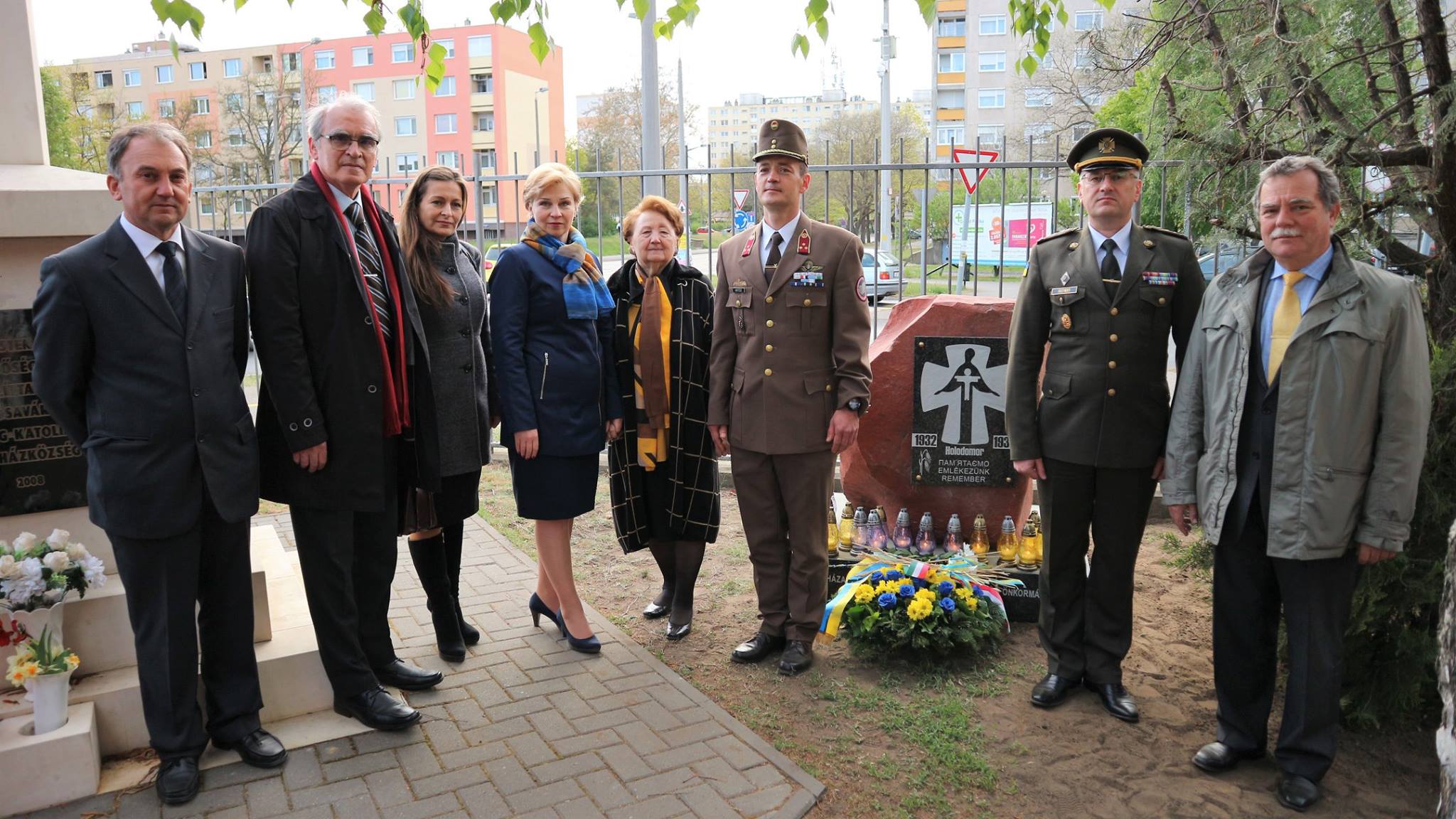 A Monument to the Holodomor-Genocide Victims Was Opened in Hungary

A memorial monument to the victims of the 1932–1933 Holodomor in Ukraine in was officially opened in the Hungarian city of Nyiregyhaza.

This was announced by Ambassador of Ukraine to Hungary, Liubov Nepop, on her Facebook page.

Participants of the event put a wreath and heads of grain, and also lit the candles in memory of the victims of the Holodomor in Ukraine in 1932–1933.

The Ambassador noted that the terrible crime of genocide of the Ukrainian people, committed by the Stalinist regime, was intended to destroy the wish of Ukrainians to be free, to preserve their identity, to have their own state. Nowadays, Ukrainians are again forced to defend this right.

“In the struggle against Russian aggression, our Defenders are killed almost every day, the Crimea and part of the Donbas remain occupied, Ukrainian political prisoners and war prisoners remain in Russian captivity. However, we will continue our struggle because the memory of the Holodomor is a terrible reminder and warning to each of us about the loss of Independence and statehood by our people,” said Liubov Nepop.

“Today we have no right to mistake. We made our choice in favor of Dignity, Freedom and European Values. We have to protect it. We need your support and support of international partners,” added the Ambassador.

Speaking to the audience, Liubov Nepop thanked the Ukrainian people of the city of Nyiregyhaza and personally its Chairman Judith Sofilkanych for the implementation of such an important initiative in cooperation with the Consulate of Ukraine in Nyiregyhaza, as well as the Hungarian Greek Catholic Church for its support.

It is reminded that last year, on the initiative of the Self-government of the city of Szeged and its Chairman, Natalia Shaitosz-Zapotnaya, a monument to the Holodomor victims in Szeged was opened, the establishment of which was supported by the Hungarian Catholic Church.

Special thanks Liubov Nepop expressed to all Ukrainians in Hungary, due to which both these monuments and monuments to the Holodomor victims in Budapest and Csomor were installed. The diplomat also noted the assistance of local Ukrainians in sharing the information about Ukraine, remembering its past tragedies and supporting it in the current struggle against Russian aggression. According to her, an important contribution to this process was made by Yurii Kravchenko, Head of the Ukrainian Self-Government of Hungary, whose premature death was a loss for the entire Ukrainian community and for Ukraine as a whole.

Liubov Nepop thanked Hungary for recognizing the Holodomor of 1932–1933 as an act of genocide against the Ukrainian people, and noted the role played by the Ukrainian community of Hungary in general and the Head of the Ukrainian Culture Society of Hungary Yaroszlava Hartyanyi in particular.