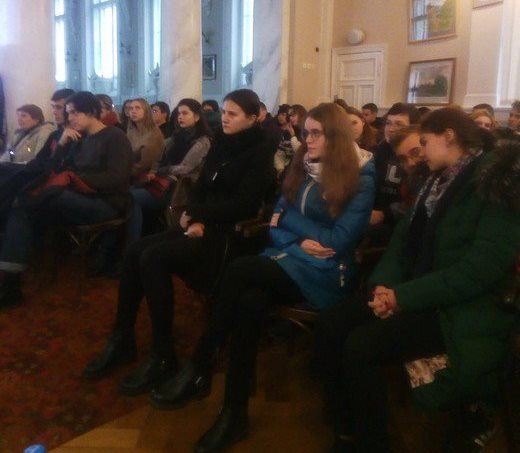 A round table, dedicated to the 85th anniversary of Holodomor-Genocide was held in Odessa

On November 15, 2018, a round table entitled “Holodomor of 1932-1933 in Ukraine – the crime of genocide” was held in the reading room of the Odessa National Science Library (ONSL), internet-resource “prichernomorie.com.ua” informs.

Within the framework of the event, a presentation and a bibliographic review of the book exhibition “Holodomor in Ukraine of 1932-1933: A Plane of Modern Studies” were held.

“My family, fortunately, did not suffer from horrors of genocide that struck the Ukrainian people in the early thirties of the last century. But the older people remembered it and told me, in essence, only before their departure from life. So it was such a forbidden and terrible theme. I am a Christian and therefore I chose the Angel as a symbol of sorrow for people, killed by starvation. And the golden impurities on the monument symbolize tears for all victims, innocently and artificially tortured by Soviet regime, “- said artist and sculptor Larysa Demianyshyn, who told about she’s project “The Grieving Angel “.

Director General of ONSL Irina Biriukova told about the work being carried out by the library to highlight the Holodomor theme. “It is pleasant to note that the printed third volume of the ONSL research work – a bibliographic guide “Holodomor in Ukraine of 1932-1933” has been published.

“In my opinion, we’ll never know the exact number of Ukrainian citizens who died of hunger. But the best memory about them is a scientific research of the terrible page of history, publication and recognition of genocide, – Nataliya Petrova – associate professor of the Department of Archeology and Ethnology of Ukraine, candidate of historical sciences, deputy dean of the historical faculty of Odessa I. I. Mechnikov National University considers. It is very important for today’s students, pupils for the future self-determination of the nation”.

Iryna Biriukova, the ONSL director has been accepted into the ranks of the Odessa regional organization of the National Union of Regional Ethnographers of Ukraine for a long-term effective research work.