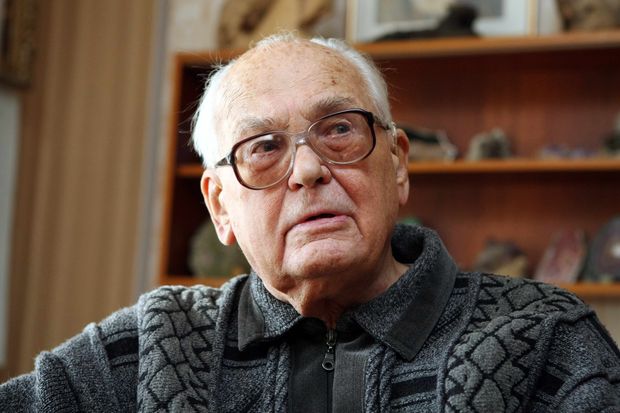 “Children walked like ghosts”: 100 years to the writer and the Holodomor witness Anatoly Dimarov

Today, May 17, marks the 100th anniversary of the birth of Ukrainian writer and Holodomor witness Anatoliy Dimarov.

He was one of the first writers in Soviet Ukraine who dared to raise the issue of the Holodomor in literature. In his novel “And There Will Be People.” (1964), he wrote about violent collectivization and the famine that covered Ukrainian villages as a result of the Stalinist regime’s planned actions. And he paid for it: the novel was significantly cut by censorship, and Dimarov’s works were not published for a long time.

The future writer spent the famine of 1932-1933 with his mother and younger brother in Yaresky village in the Myrhorod region, near Velyki Sorochyntsi.

“Especially the severe famine came in the spring of the 33rd. In winter, people still somehow held on. They ate what they could hide from those who walked with probes. Some even managed to hide a bag of bread, – Dimarov recalled in an interview with Gazeta.ua – But the mobilized Komsomol ran and examined outside the huts. When she found human excrement, she unfolded it with their sticks and checked if there were any wheat grains. If the grain was found, the communists came, the commissioners interrupted everything. The furnaces were demolished. Everything was swept away. Both beans and potatoes were taken away.

My mother was a teacher. My father was dekulakized on the 29th. My mother had two of us – my younger brother and me. When the acacia blossomed in the spring, the flower was plucked, and my mother made something like pancakes. It crumbled because there was no oil. I will not wish such food to anyone. Sparrows were caught. A sieve, such a stick, and put something under the sieve. Sand because there was nothing. And as soon as the sparrow gets caught – hop, pull out the stick, eat!

There was a seven-year school in the village. Full of kids. After the famine, almost all teachers lost their jobs (because the children died. – Mus.) My mother had to go to Donbas, as soon as the hunger strike ended. People ate everything. The children were eaten. A neighbour lured a boy next door, cooked and ate.

People came from other villages all the time  They fell, died under the mud. I remember a big uncle coming up, he seemed to me like a mountain. And my mother, when there was no one to teach, went to the team. They burned something. There was a grout once a day. Then every child who was alive did not part with a spoon. They ran there with those spoons. Mothers, of course, shared. Then she sips a few times.

Mom shut us down. She said to sit down and not to go out. And she went to the field. Suddenly the door opened, the latch took off – what’s that latch? There were no locks. And a swollen uncle came in. He could not approach to the door. He was like a huge terrible mountain. The abdomen was filled with water. From bare feet – wet footprints on the floor. He stood in the doorway and staggered, not saying a word. And moaned. My brother cried out terribly. And I sped up and punched the man in the stomach. And my hands on his elbows went into him like a pillow. They dived. He fell and died immediately in front of our eyes. I knocked out the window. We jumped outside and ran to my mother.

I was ten years old, the eleventh. And my brother seven. Kids love to play. And then no one was having fun. All went like ghosts. Stomachs were filled with water, and matchstick legs.

Those men who settled down to carry the dead were given a loaf of bread per day. And my brother played like this: he seemed to be carrying the dead to the grave. He made a cart like this, threw sticks in there and boasted: “And I earned bread, and I earned bread…”

Why did we survive? My mother was a good teacher, she was loved by a pig farmer. For the children that my mother taught. And I was already plump, could not walk. One night she came and said, “Make two sacks.” They brought potato peelings. The pigs were boiled with spoiled potatoes, and those two bags were brought.

Most of all people died, wandering through the village. With kids. They lay right on the street, under the wattle fences. Most often near the church. Just a human carpet, and they died with their heads in the church.