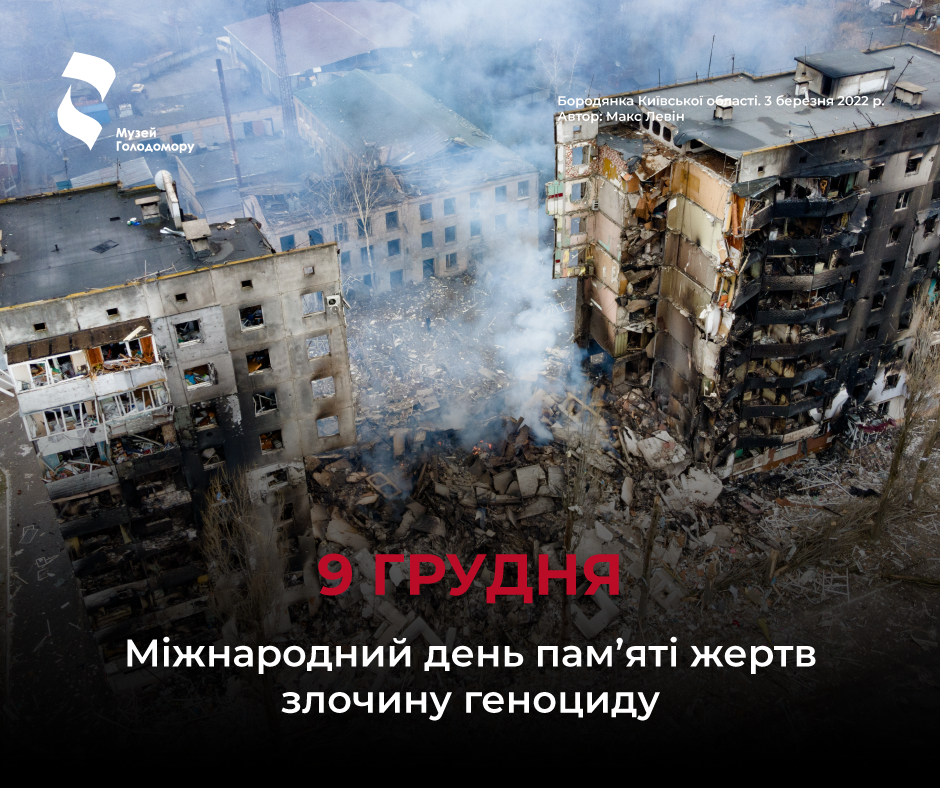 December 9 is the Day of Remembrance of Genocide Victims

December 9 is the International Day of Remembrance of the Victims of the Crime of Genocide, honouring their dignity and preventing this crime.

This date was not chosen by chance: it was on December 9, 1948, that the Convention on the Prevention and Punishment of the Crime of Genocide was adopted. And in September 2015, at the session of the UN General Assembly, Resolution A/RES/69/323 was adopted, declaring December 9 as the International Day of Commemoration of the Victims of Genocide.

Lawyers call genocide a “crime of crimes.” After all, it is usually accompanied by large-scale extermination of certain humanity and atrocities based on ethnic, racial or religious affiliation. That is, the very fact of a person’s birth in one or another community can become a sentence for them. Therefore, the world public recognizes genocide (repression, ethnic cleansing, forced resettlement of peoples) as the most dangerous violation form of human rights and freedoms and the most serious crime against humanity.

Ukrainians are among those nations that have experienced genocide in their history. The Holodomor of 1932-1933 has already been recognized as an act of genocide by about 20 countries of the world. Ukraine and four other states also recognized the deportation of the Crimean Tatars in 1944 as genocide.

It would seem that in the XXI century, at this stage of human development, there should be no place for genocidal practices in the world. However, Ukraine is once again experiencing a “crime of crimes”. The current Russian-Ukrainian war has been recognized as an act of genocide by Poland, Ukraine, Estonia, Latvia, Canada, Lithuania, the Czech Republic, and Ireland, and the other day the relevant resolution was supported by the US Senate Committee on International Relations.

Only Ukraine’s victory can stop this genocide. And Russia should be severely punished for its crimes today and similar actions in the past. Because unpunished evil will return again and again…