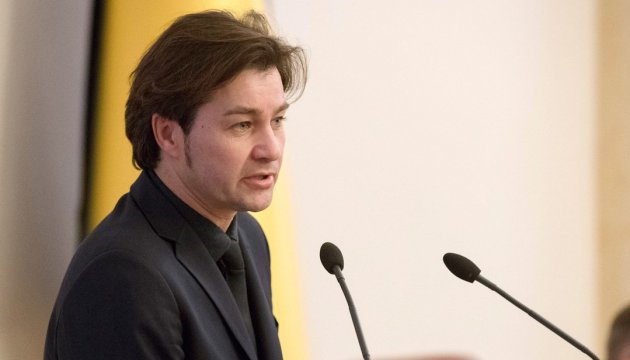 For us, it's a matter of honour to complete the construction of the National Museum “Holodomor Victims Memorial”, – Yevhen Nyshchuk

On January 19, 2018, during the “Hours of Questions to the Government” in the Verkhovna Rada of Ukraine, the Minister of Culture Yevhen Nyshchuk spoke about the state of preparations for the commemoration of the 85th anniversary of the Holodomor of 1932-33 in Ukraine, a genocide of the Ukrainian people.

“Today we are talking about one of the most tragic pages of our history, because this year we honour the memory of the victims of totalitarianism – artificial famine, victims of the “starving war” against Ukrainian people, – the Minister of Culture of Ukraine began his speech. – The government assumes the responsibility to assert the truth, and therefore – to declare to the whole world: the Holodomor in Ukraine in 1932-33 was genocide against Ukrainian people”.

“Many speeches emphasized that this topic seemed to turn to the background, and during the Revolution of Dignity, one of the accusations towards Yanukovych’s criminal regime was suppression of the very concept of genocide in favour of the Russian tyrant. In November 2016, by the decree of the President Petro Poroshenko, the topic was actualized concerning the due respect to this memorable date for each Ukrainian”, – he noted.

“It’s not only about the building. A modern museum is a new form of communicating information of historical truth, no matter how bitter it was. Understanding mistakes and negative experiences is a guarantee of a healthy society, the way to the future through the laid way. It is necessary to speak loudly which psychological traumas the Ukrainian nation experienced through the torture of hunger, which human codes were violated, as the fear was developed in society – one of the most powerful means of enslavement. It is necessary to reproduce the complete, without censorship and silence, picture of the deception of the communist government and its abettor – national mankurts”, – emphasizes Yevhen Nyshchuk.

“So, we plan to create the exposition filled with modern technology and technologies “of the future”. Everyone who visits this museum, even in Internet tours, cannot be disrespectful towards the breadcrumbs. The incredible power of history, the level of tragedy which did not even dream of Shakespeare, will have an emotional effect on future generations. It will be a nationwide ever-life lesson in history and ethics. A lesson of National Memory”.

The Minister of Culture told about activating the efforts of the National Museum “Holodomor Victims Memorial” in cooperation with the Ukrainian Cultural Foundation and the Ukrainian Institute of Books in the direction of informational work in the world to spread true testimonies of the terrible crime against the Ukrainian people. In particular, it is about announcing several contests for grant programs for the creation, translation and publication of books in various world languages and their promotion. And also numerous people’s initiatives aimed at perpetuating the memory of this terrible tragedy.

He also urged young people, activists and volunteers to engage actively in ethnographic expeditions and the search for those who are carriers of the family memory, who bear the memory about difficulties, folk songs, since these pages of immaterial culture are important to the descendants. “Such expeditions can be carried out within the framework of educational programs of universities and educational institutions,” Yevhen Nyshchuk added.

Separately, the Minister touched upon the organization and conducting of the International Scientific Conference, which goal is to raise the issue of the Holodomor-Genocide on a global level, attracting leading historians, publicists, bloggers.

“I am confident that there will be no discussion at this forum, because new and new generations of intellectuals and experts that shape the public opinion understand: the truth about events in Ukraine in the 1930’s of the twentieth century is neither silenced nor distorted. Because it is a threat to other people. Russia, which at the level of state leaders revives the memory of tyrants, propagates the values of totalitarianism, introduces censorship that has entered Ukraine and really embodies the aggressive policy, is becoming an increasingly international danger”, he said.

The Minister of Culture also announced the holding of a competition for the best scenario idea of a new feature film about the Holodomor in Ukraine in 1932-33, the creation of which was initiated by the Prime Minister of Ukraine during the meeting of the Organizing Committee, as well as the next step – public pitching for the production of the film.

“I am sure that new artistic movies, documentaries, book publishing, electronic portals and web-sites will help in making decisions in support of Ukraine and in the recognition of the Holodomor as genocide and in the defence of our Independence and sovereignty. Thus, art, culture will fulfil one of its most important functions: protection of the Man, exaltation of humanity and truth,” he says.