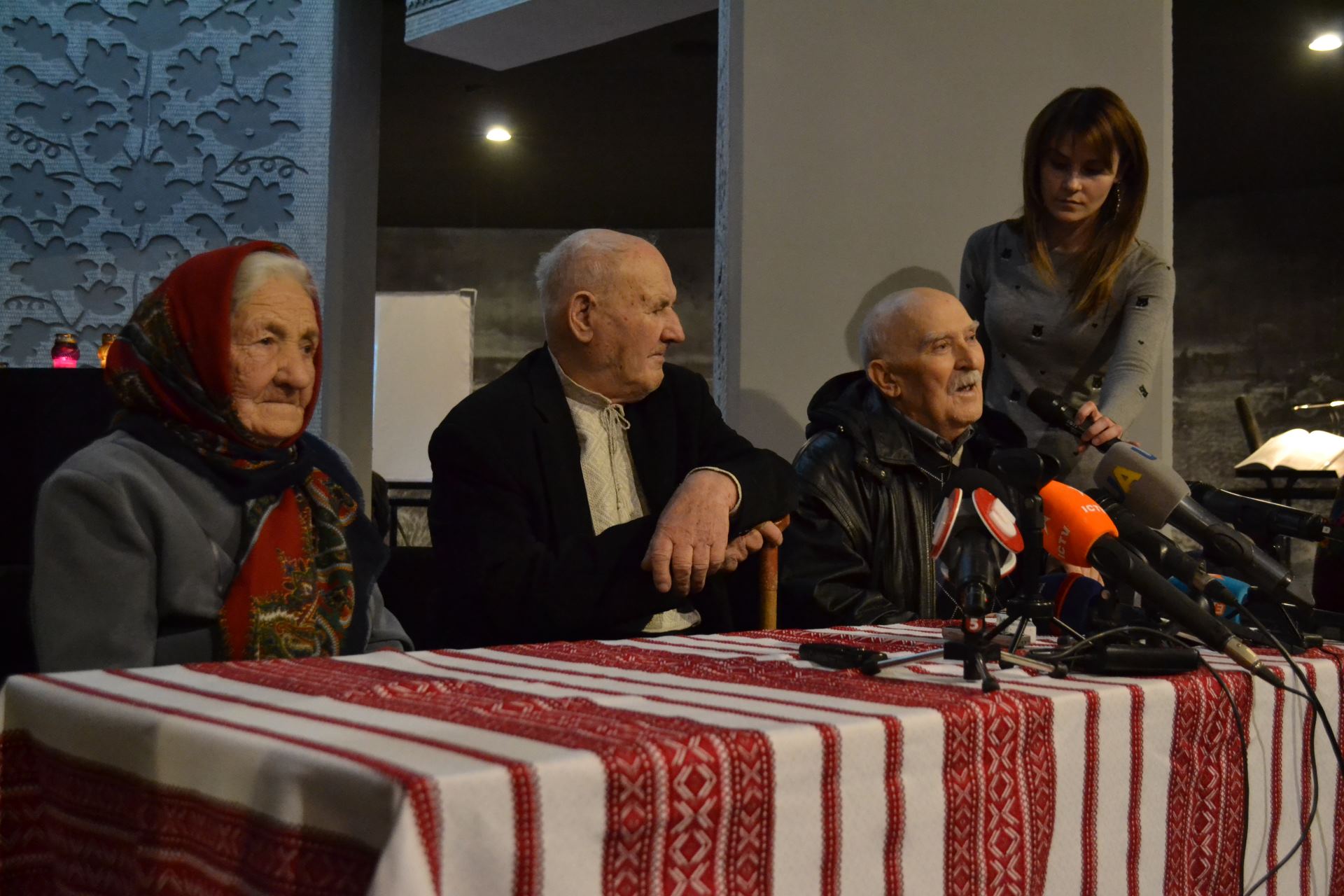 I saw everything with my own eyes, when the carriages approached, and four-five people came to each house, and they came to us – "Where is the bread?"

On November 16, 2017 in the Hall of Memory of the “Holodomor victims Memorial” a meeting with the people who survived all the horrors of the Holodomor and who are eyewitnesses and victims of the crime was held.

The Holodomor took the lives of about 7 million people in Soviet Ukraine and its consequences are still felt by Ukrainians. Fortunately, people still live, who can tell the whole world about this terrible tragedy, which was suppressed for decades. However, with each passing year, there are less and less Holodomor witnesses, so the event held in the walls of the National Museum “Holodomor Victims Memorial” is unique, as  well as witnesses who, despite their age, were able to convey to the visitors and journalists all the pain and suffering that the Ukrainian village endured ( including their families) during the Holodomor-Genocide.

Mykola Onyshchenko survived genocide in the village Rosa, on the outskirts of Berdiansk, and from 2014 he is getting through other difficulties:  he is a forced migrant from temporarily occupied territories. Due to Russia’s military invasion of Donbass, he was forced to leave his home in Luhansk. Two other witnesses, Zynovii Maslo and Tamara Bedrenko, shared their memories of the Holodomor in their village in Kyiv region, in Fastiv district.

The witnesses told about the process of collectivization that preceded the Holodomor and caused total robbery of Ukrainian villagers.

“The parents went to the collective farm. They came and took everything. But they left the cow. And we were saved by that cow. As a father went to a collective farm, he already could receive something from there. He brought some pea soup. We were not swollen. But the neighbours were very swollen. They fell on the roads and nobody was burying them. And then they were already dug up, as near us there is a cemetery. They buried because the ravens could take it, because there were no dogs, and there were no cats “, – Tamara Bedrenko tells.

Instead, Mykola Onyshchenko remembers how his land – the most valuable thing that peasants had by then – was taken away from his grandfather. He says that nobody wanted to voluntarily give what they earned by hard work.

«Before the Holodomor, my grandfather worked on the field. We lived more or less normally. It didn’t satisfy the authority. They wanted us to work for the state, not for ourselves. So they started driving people into those collective farms. No-one wanted this. Then they started taking the horse away from my grandfather, they took the cow, they took everything – we couldn’t get along. I saw all of this. It’s hard to imagine, how people looked like – pitiful, poor. These poor people were dragged into collective farms; they didn’t have other choice, only to join them, because they had nothing to eat. Some people resisted, they didn’t want this. But they were 10-15% already by then, in 1932. And all were in collective farms”, – the eyewitness shared the memories. Mykola Onyshchenko remembers that the bread withdrawal started in the autumn of 1932.

«Our village was small. And it started from the big villages, we heard it. I was 7 years old, and my mother told me, that they started taking bread in our village. I remember this. There was such a pressure, that we, children, also felt it. It was scaring. I saw everything with my own eyes: how carts with horses started going and 4-5 people came into each house. And to us came: “Where is the bread?”, and started searching, started interrogating. By the way, we didn’t have any bread», the man said.

Zynovii Maslo tells about the tragedy of the Holodomor and its dreadful consequences on the example of the cemetery in his village, on the fifth part of which the Holodomor victims are buried and the four-fifths “got” there during other 99 years.

«When the state took away everything, people began to die. The priest counted how many souls died today.14 people during one day. Our cemetery is about 100 years old. About the fifth part of it is occupied only by those people who died during one summer, in 1933. People were severely dying in May, June and July. The state assigned a horse, which needed to take out the dead. My neighbour and my peer was on his way to his field, something else was there, the head of the village council stopped him and said “Go to Lavriyenko, take the dead girl there”. We went there and small brothers were also there. “Where is she?”, “On the stove”, – they say. We went to that stove and tried to pull her. We took her, touched – she had been lying there already for a while. We threw her into mass grave», – remembers Zynovii Maslo.

«You cannot imagine this. No cinematography can show it. When a person appeared who “had cheeks”, all were saying “Look, how fat he is”, because it was such a joy. Now people are thinking of losing weight, and then it was a miracle when a person was staffed and not hungry», – summed up the tragedy of all experienced during the Holodomor Mykola Onishchenko.

Due to such meetings, a modern Ukrainian can understand the tragedy of the Holodomor history, reassess the life values, and realize that only independent Ukraine can guarantee such tragedies never to happen on our lands again.