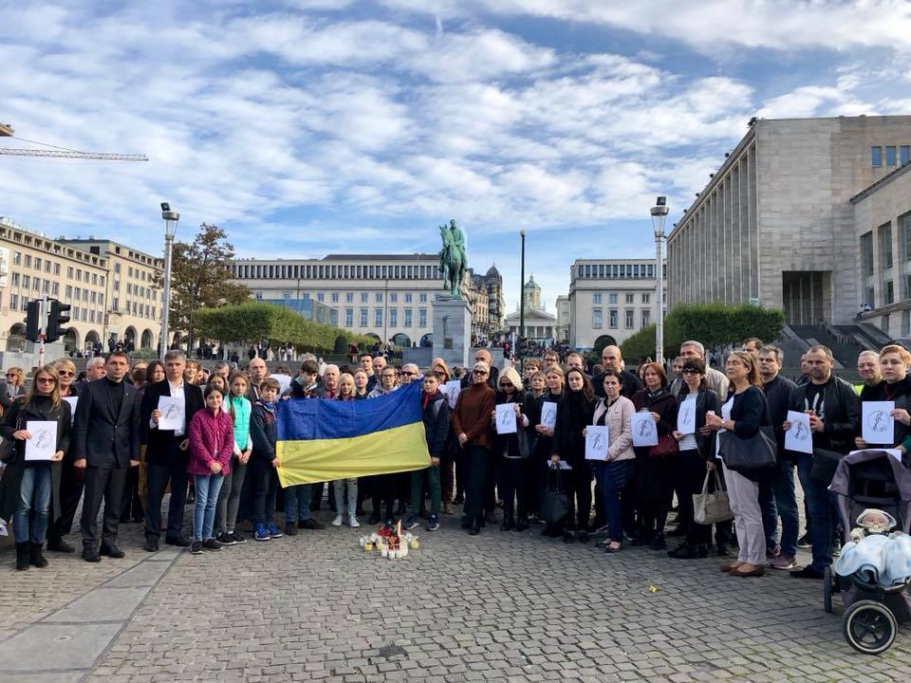 In Brussels, Holodomor victims were commemorated

On October 21, 2018, Ambassador of Ukraine to the Kingdom of Belgium, Mykola Tochytskyi, Reverend Bishop Borys Gudziak, as well as the Honorable Consul of Ukraine in the province of Limburg, Kris Beckers, commemorated the memory of 7 million Ukrainians – victims of the Soviet genocide in Ukraine in the 1930s, by laying flowers to the Holodomor monument. This monument was erected near the autocephalous Orthodox Cathedral of St. Archangel Michael in Genk in 2003.

On the eve of the event, on October 20, 2018, the representatives of diplomatic institutions, Ukrainian community and indifferent citizens held an International Action “Let’s Light a Candle of Memory!” at the central square of the capital of Belgium. The participants of the action lit the candles in memory of the innocent victims of the Holodomor and read out the names of the Ukrainian children who were killed by the Soviet government in 1932-1933.

The event was attended by Ambassador of Ukraine to the Kingdom of Belgium Mykola Tochytskyi and Head of the Mission of Ukraine to NATO Vadym Prystaiko.

The Kingdom of Belgium has not yet recognized the Holodomor as the genocide of the Ukrainian nation. As to the European awareness of the massive deaths of Ukrainians from starvation, it is shown by the publications on the pages of the newspaper “Dilo”, which reprinted translated into Ukrainian articles of the Belgian press about the situation in Ukraine in 1932-1933.

Hergé Museum holds comics of 1929-1930 by Herzie Tintin on the adventures of Tintin in the Land of Soviets telling about Holodomor.