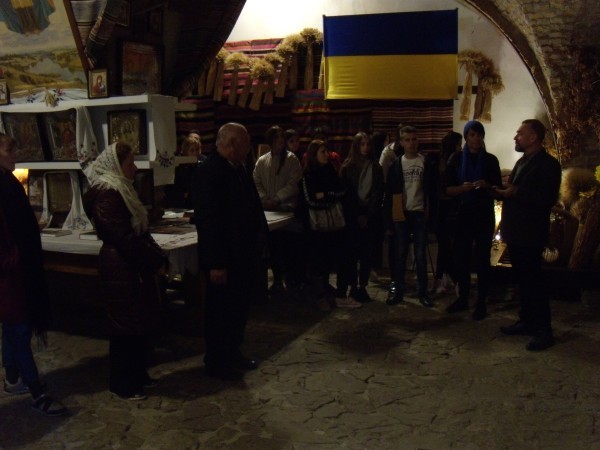 On October 4, 2018, 10 years have passed since the creation of the Museum of 1932-1933 Holodomor in Khmelnytsk region in Medzhybizh, the Prostir.Museum reports.

The museum exposition dedicated to the tragedy of 1932-1933 Holodomor, which was opened on October 4, 2008, with the participation of the third President of Ukraine Viktor Yushchenko, is a special one from many points of view. First of all, this museum was the first museum in Ukraine, entirely devoted to the tragedy of the Stalinist genocide of Ukrainians. Very important is the fact that it speaks to the visitor not by the language of exhibitions and documents, which are separated from people by the glass of show-windows (although there are more than eloquent documents and photographic testimonies here).

The museum is constructed in order the drama of work, life and death of ordinary people can be felt by touch, and numerous allegories and symbolic compositions speak without words, speak about Holodomor to the heart of our contemporaries. In fact, all this epic exposition, which consists of hundreds of instruments for peasants’ work, a handicraft, a household, sculptures, and images, is one single museum object, a large-scale artistic installation, into which a visitor falls, feeling horror of starvation, the burden of injustice, and, at the same time, the hope for life.

The author and inspiration of this museum, the head of the artistic group, who created it from the ruins of the former carriage corps of the Medzhybizh fortress literally in three months, is the people’s artist of Ukraine Mykols Mazur. The artist was not destined to survive until this day, but his memory was honored during the celebration of the anniversary of the museum exposition by the memorial service – since the third anniversary of his death falls on the same days as the tenth anniversary of his monumental work.

Workers of the State Historical and Cultural Reserve “Medzybizh”, representatives of the Medzhybizh community, guests and visitors honored the dead people by prayer and by the discussion of modern Holodomor lessons. They shared their thoughts on modern threats and challenges to the Ukrainian people – military, political, and intellectual ones. They shared the conviction that the Medzhybizh fortress is also a peculiar image of Ukraine: it was almost destroyed by Soviet power, and now it is rebuilt from ruins and is filled with life.

Symbolically, on the day of the 10th anniversary of the Medzhybizh museum exhibition about the victims of Holodomor, the event of historical importance took place: on that very day the Genocide against the Ukrainian people was recognized by the Senate of the United States of America by its resolution.