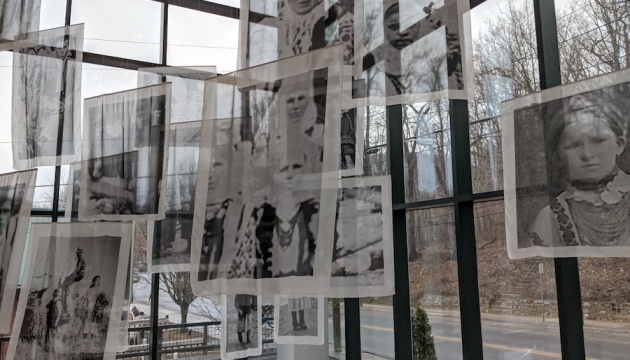 The Turchin Center for the Visual Arts in Boone, North Carolina, hosted an online broadcast of a silk panel by Canadian artist of Ukrainian descent Lesia Maruschak.

The video is posted on the center’s Facebook page.

On June 10 the installation  “White Shadows” could be seen online by anyone for an hour. It consists of portrait images on silk, attached to the ceiling.

The installation is one of two presented as part of Lesia Marushchak’s project “Maria & OH CANADA: Where The Land Is Free”, which will be on display at the Turchin Center for the Visual Arts until August 1, according to the center’s website.

“The installations present her response to historic events that have marked her identity as a Canadian of Ukrainian descent: the 1932–1933 famine-genocide in Soviet Ukraine, and Canada’s first national internment ethno-cultural communities during 1914–1920,” the Turchin Center for the Visual Arts website informs.

There is also a video of the exhibition “Maria & OH CANADA: Where The Land Is Free”.

Lesia Maruschak is a famous photographer. The artist’s photos have been exhibited in the United States, Canada, Sweden, Korea and Europe. Her works also include sculpture, painting, performance, film and literature. Many of Lesia Marushchak’s works are in museum collections. In particular, they are in the famous American museums (Metropolitan Museum of Art, Phoenix Art Museum), universities and research centers (Stanford University, Athenaeum, Columbia University, Thomas J. Dodd Research Center), the Library of Congress.

As Ukrinform reported, “Maria” is one of the components of a large multimedia art installation connected with a mobile memorial space. The project is dedicated to the memory of the victims of the Holodomor of 1932–1933. The portrait of a young girl Maria, who managed to survive and move to Canada, while millions of people died, is in the focus. In addition to the book, the project also includes an exhibition of images and installations, a film and a series of lectures.

In May 2019, Lesia Maruschak’s art book “Maria” won the highest award at the International Book Arsenal Festival in Kyiv, and was shortlisted at the Athens Photo Book Festival and the prestigious Prix du livre, Recontres d’Arles.

The Maria project was also presented in Paris as part of ParisArtistes and the prestigious photo exhibition Objectif FEMMES on October 4-6, 2019.

The World Congress of Ukrainians provided patronage to the Maria project.

The news was published on Ukrinform.