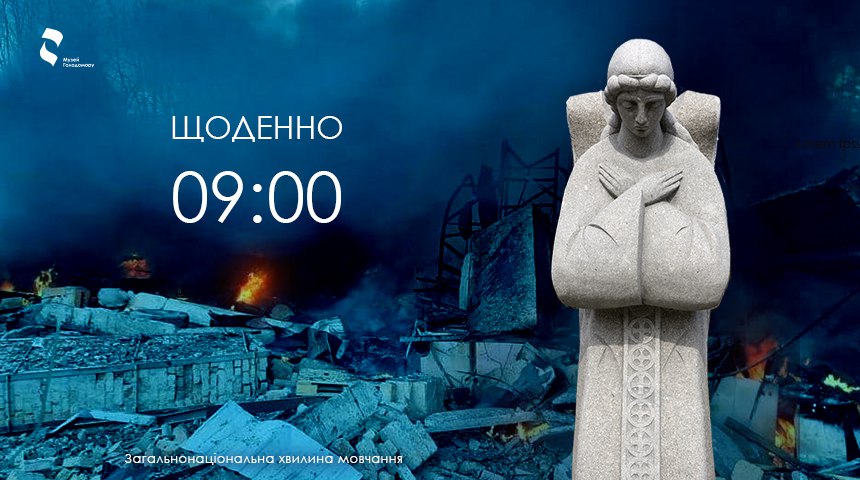 Let’s remember the fallen with a moment of silence

Since March 16, Ukraine has been commemorating the victims of this brutal war of aggression daily. At 9:00 a.m. every day, a nationwide moment of silence is observed to honor the memory of those killed in the armed aggression of the Russian Federation. It will be announced in all mass media, authorities, educational institutions, diplomatic missions, railway stations, etc.

The relevant decree was signed by President of Ukraine Volodymyr Zelensky. “To honor the bright memory, civic courage, and devotion, the strength of spirit, resilience and heroic deeds of soldiers killed in combat missions to protect the state sovereignty and territorial integrity of Ukraine, civilians killed in the armed aggression of the Russian Federation against Ukraine, I decide: to start holding a national moment of national silence every day at 9:00 am for compatriots killed as a result of the Russian Federation’s armed aggression against Ukraine, which should be announced in all media, regardless of ownership,” the document reads.

According to the decree, the Cabinet of Ministers, region, and Kyiv city state administrations are instructed to ensure a nationwide moment of silence in state and local government institutions, enterprises operating (except where prohibited by production technology), and educational institutions.

The Ministry of Foreign Affairs is instructed to ensure a moment of silence by foreign diplomatic missions of Ukraine daily at 9:00 local time in the host countries.

The decree came into force on March 16.

According to data released by President Zelensky on March 12, about 1,300 Ukrainian servicemen were killed in the war against Russia.

Prosecutor General Irina Venediktova said that as of the morning of March 18, 109 children had died since the start of Russia’s war against Ukraine.

According to Defense Minister Oleksii Reznikov, in three weeks of the active phase of the war, Russian invaders killed about 3,000 civilians. However, these losses are far from complete – accurate calculations cannot be made due to hostilities.

Blessed memory of the dead…