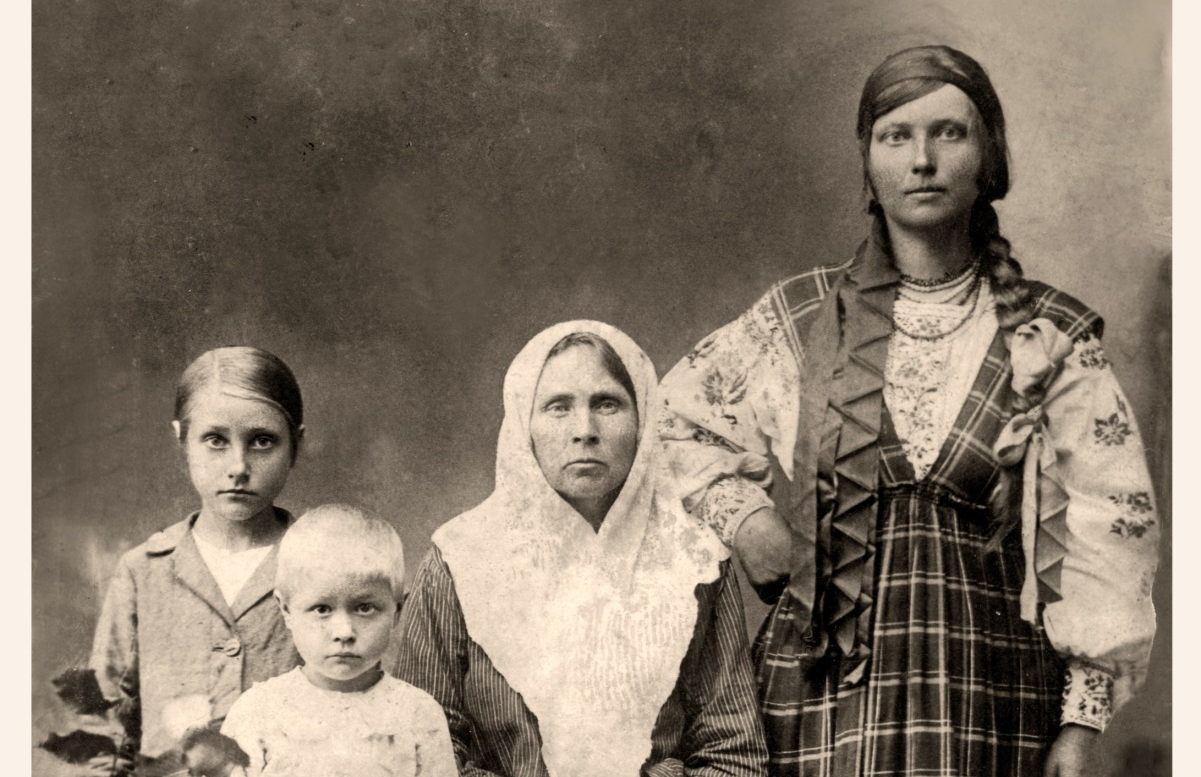 Memory about the Holodomor – my memory

In the end of the last year, in December, Krutova Valentyna Mykolaivna sent a testimony about the Holodomor to the “National Museum Holodomor victims’ Memorial”. Those were the memories of her grandmother, Kamins’ka Franya Mykolaivna, who survived the Holodomor.

Before marriage, Yulya (Franya’s mother) was educated and worked as a teacher in a gymnasium in Bila Tserkva. After the wedding, her husband Mykolay said that his wife should work at home. He himself was a veterinarian in Sokolivka, although he did not have any special education, he even could not read. He was respected by people and, if it was necessary, they called him to treat their cattle.

Franya was the oldest daughter (she was born in1909). With great warmth, she remembered her mother’s bagels. In the evening, Yulya baked bread and bagels, and in the morning on foot (16 km) carried those to the market for sale in Bila Tserkva. Her bagels were very famous in the countryside with their special taste. The neighbors asked the recipe. Mrs. Franya recalled that her mother was sharing the recipe but hid her secret of attractiveness, as she said “commodity look” of the bagels. The woman at the end of baking wetted the bagels with honey and her pastry sparkled, and the neighbor’s did not.

In 1930, Franya married Kamins’ky Casymir Ivanovych, who had already come through the dispossession. The family lived in a khutor (in the woods) near village Yuzhefivka (now it is Yosypivka in Bila Tserkva district).

“The harvest of 1932 was good. From Dombrows’ky was taken away everything that was grown and harvested for the winter, but that was not enough.

If  it wasn’t for Tkachenko (a man from a poor family, a well-known in the village communist, the head of a collective farm, who wooed to Franya Mykolayivna but she refused him), the family could have survived, but he did his best to make them die.

In order not to stay without food at all, Yulya Dombrovs’ka decided to hide the wagon of wheat, and took it away with her daughter Myhalina to Franya’s place in the woods. As she rode, she could barely hold the reins in her swollen hands. The horses spent the night in the house so that the thieves would not steal it. And when Yulya asked for the wheat back, Franya’s mother-in-law did not give it, she said that there was no wheat. She herself survived, but her grandson, Franya’s first-born child Vladimir and all the Dombrovs’ky died.

Little hungry children were crawling on the naked field, which was already harvest for a long time, and searched for spits, frozen potatoes, and the Komsomol men were chasing them on horseback and beat them by whip, because it was forbidden to “steal” from the collective farms.

When Petrunya was gathering the ears on the field, the horse rider came and asked her: “Whose child are you?” And she replied that she was a child of Galabirov, an elderly couple which lived in the village. And the rider replied: “Well, then collect, I thought that you are Mykola’s child”. (Why a stranger did not know the faces of Mykola’s children, but knew that they could not pick up something that fell off  in field and was not eaten by birds?)

She brought those grains home, the grain was already sprouted. Her mother Julia baked pirozhki with beet, they were crackedgreatly, and put them in the barn on the shelf to let them cool down. And then the Komsomol came, ate pirozhki and craped in the barn.

Hryhoriy Tkachenko brought the “labor commission” to the house, known among people as the “black broom” of 40 people. It was winter outside, little Petrunya was sleeping. Tkachenko with scrap by his own hands ruined chimney in the stove broke all the dishes. Mykola had no strength to repair the stove, there was nothing to eat and even in the house it was cold. The family remained without any hope of survival.

First died parents and the elder sister, left only six years old Anelya and 4 years old Petrunya. Petrunyabrought a basket of black mushrooms that grow on manure, gave those to her sister, and says: “Eat, I am already full.” Then Anelya died, and Petrunya started to go to school instead of her to get the food of terrible quality, and the uncle’s Mariya ran and reported that Anelya was lying dead in the pantry.

Petrunya died the last one, swollen; she had one of her leg paralyzed. “

“In the thirties, thieves among the local’s brothers Gorobets and Poljevsky and their son-in-law, Mykyta Kovtyuh, were constantly attacking, robbing and beating people. They trapped everyone under the stove and hit them to make people give them their money; they pulled out gold earrings from Franya’s ears. Later they even took apples from the garden, and dug the potatoes.

One day, crony Pavlo Kovtuh left in Ivan’s place in the woods 2 shrouds to keep them safe and went somewhere. Thieves came and stole many things and those shrouds too. Gertruda grandmother was crying, and complained to her son in law Mykyta Kovtyuh, and he said where the stolen was hid. They went and dug out the shroud sand 2 large pillows from Granya’s dowry.

Later, the Gorobets brothers were captured and sent to Kalima, and Kovtyuh was more nimble, he repeatedly escaped when he was taken to exile, but he was still imprisoned.

In the beginning of the 30th, the collective farm took away two horses, very fine horses. Kazymir was bringing them hay for a long time, but they died of hunger. The cattle were fed by whatever was around, even by the straw that was covering the huts.

In about 1932, Franz and Kazymir, had a son born, Vladimir, who died during the Holodomor; he was buried in the forest on a hill under bushes.

Franya, swollen from hunger, went to work, where for the workers was organized “food” – cooked bad quality soup and gave a piece of bread. Before the sunrise, Franya took the child to the nursery, the child was still asleep, and she gave him a slice of bread, which older hungry children tore out of his hands. And she ate only pumpkin. At work, one man asked: “What do you eat, you are so terribly yellow, do not eat it, because you will die.”

This was recorded from the words of Al’bin Volodymyrovych Kamins’ky, born in 1937, from Yosypivka village, now he lives in Kiev, the grandson of Nikodym Stepanovych:

When they had a great family gathering at home, they did not drink alcohol, they drank tea.

In 1928, the first wave of collectivization took place. Nikodym did not want to give away what was his, but he was told: “If you will not give it voluntarily, we take it by force, and we will send you to Siberia”. He gave away all he got, and on the third day his heart could not stand and he died, and his wife died on the fourth day. They were buried on the same day at the Catholic cemetery in the village Vasyliv. Now there are some ruins left from the church, and the cemetery is a field, the Soviet authorities have long ago over plowed the Catholic cemeteries in the Bila Tserkva district. For a long time afterwards the farmers have accidentally plowed up the coffins on the field. “

Krutova Valentyna Mykolaivna, thank you very much for keeping these memories! For the opportunity to hear this story, this painful truth! The Holodomor tragedy is a history of almost every Ukrainian family, a story of a modern Ukrainian nation. The memory and knowledge about the Holodomor today is a powerful safe guard from the crime of genocide against Ukrainians. The lessons of the Holodomor history are teaching to resist injustice, the threats of the crime of genocide in any part of the world. As a matter of fact, for this purpose the Holodomor victims’ Memorial exists.

Friends, thanks to your public position, conscientiousness, support, we together will be able to collect and preserve as much testimonies as possible from the people who survived the Holodomor!

If you have written memories of relatives about the Holodomor, or you have the desire to write in cooperation with the museum an interview about the Holodomor of your loved ones, please contact us at: 254-45-12, or send the information by e-mail: [email protected]