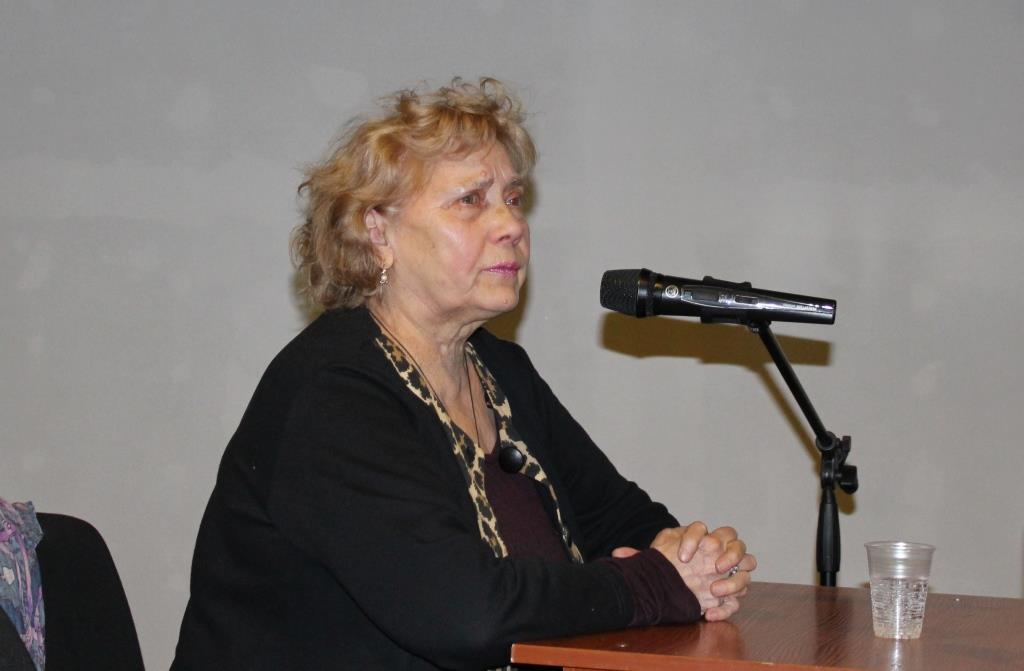 "During spring all trees were bold, people have ripped the leaves off them" – the eyewitness of mass-hunger 1946-47 says

On February 18, in the Hall of Memory, a meeting with the witness of the massive famine of 1946-1947 Nadiya Mudrenok (born 1938) took place.
Nadiya was born in Chernihiv region, Novo-Basansky district. The childhood of a woman is connected with the horrors of the World War II, famine and post-war chaos.
In five years, a little Nadiya overcame a long way from her native village to a concentration camp on the territory of modern Poland. In terrible camp conditions, frozen potatoes and beets were children’s delicacies. After arriving at the Soviet Army camp, so-called filtration was started by SMERSH-group. As a result, many prisoners of Nazi concentration camps were exiled to Stalin’s camps. In the filtration camp Nadiya Mudrenok became ill with typhoid fever and was sent to the military hospital with her relatives and then in her native village after treatment.
Here they saw a terrible view, as during the war almost all the buildings were destroyed. There were almost no men in the village, most of the hard work in the collective farms fell on the shoulders of widows and children, and a hunger began. The harvest of 1945 did not come to the peasants, the circumventors on the fields with whips dispersed hungry children who were looking for the spikes left by the harvester. To the peasants came the rumor that nearby the village are warehouses with potatoes, which were left as seed fund. All potatoes were rotted, only starch remained. People, despite the terrible stench, handed down the starch in small numbers, so as not to die of starvation.
In 1946, according to the memories of women, people ate grass, leaves, roots. In the spring, the trees stood without leaves. The situation worsened with drought. There was no rain for a long time. Nadiya recalls that in this difficult time peasants invited a priest from a neighboring village and two days went to a prayer walk around the village.
After the war, the family learned that Nadiya’s father died in the Darnytsky concentration camp. The family survived as it could – in winter they suffered from cold, because they could not make enough firewood. The oldest sister from the age of 14 has been working on a collective farm. For hard work at night the workers were given mashed potatoes, some of which the sister brought home to share with younger family members.
Nowadays one can difficult imagine such horrors. However, the memory of the past can teach us to appreciate the present and prevent this from happening in the future. To revive the history of Ukraine for themselves, pupils of grades 9 and 10 of the Kyiv school №1 of Shevchenkivskyi district came to the meeting. The history lesson in the format of the stories of the eyewitness made a deep impression on them and did not leave indifferent. After all, this hunger is not only a lesson of history, but also of humanity.
Thank you Mrs. Mudrenok for your time and the desire to meet! We are waiting for you on other events within the framework of the ‘Oral History’ of the Holodomor, the announcements of which will appear on our site and in social networks.