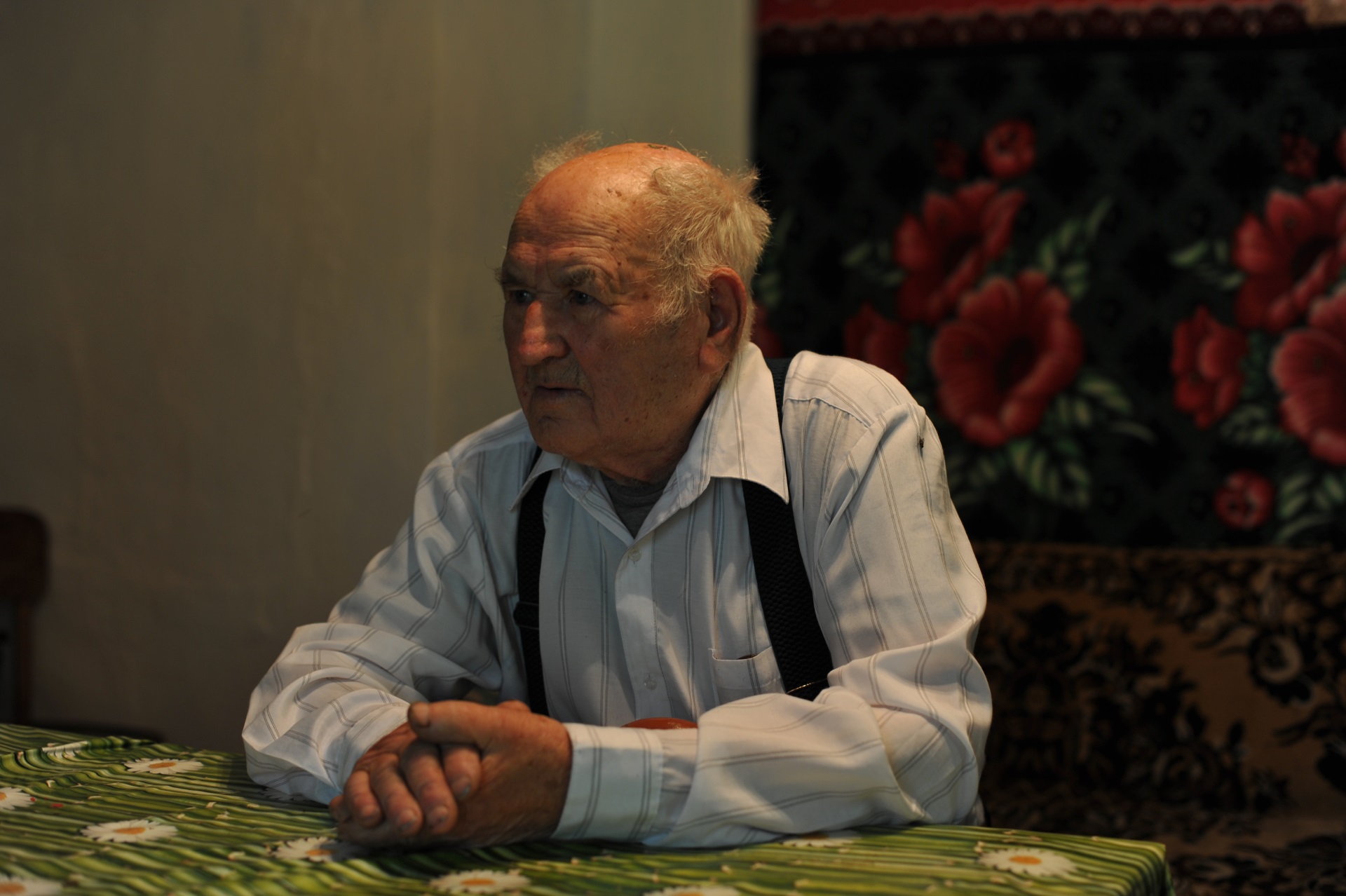 "It is necessary to tell, for the current generation to know about the Holodomor, what is the Holodomor!" – Zynoviy Maslo

On November 16, 2017, a Holodomor witnesses meeting took place in the Hall Memory of Holodomor Victims Memorial. The oldest participant of this memorable event was Zynoviy Ivanovych Maslo (born in 1922), who survived the Holodomor in the village of Pivni in the Kyiv region.

On September 2017, the head of the research department Julia Kotsur and the main keeper of the museum’s funds, Nina Lapchynska, together with the photographer Ksenia Pyliavska, within the the program of recording the memories of people who survived through the genocide in 1932-1933 in Ukraine, visited the villages of Kozhanka and Pivni of Fastiv district of Kyiv oblast, where interviews with Tamara Mykhaylivna Bedrenko and Zynoviy Ivanovych Maslo were recorded.

Zynoviy Maslo was born in a peasants` family, a father and mother worked on the three hectares of land. In addition, the head of the family was sewing the boots to feed his family.

“Who went to the collective farm, it was a little easier for him to live. And who did not go to the farm, just like my father, it was bad for him. The chairman of the village council once told my father: “Do not breathe the Soviet air if you do not want to go to the collective farm.” Well, how is it – to give them everything?! Nobody wanted to go to the farm. At that time, we had nothing to give. Before this we had the oxes – the father sold them. There was a horse – my father sold it. There were sheep – father slaughtered them. If he had not done so, they would have taken everything completely. There was a cow, somehow it was taken to the collective farm, or for taxes, I do not know. We had another apiary, so small, about five hives, up to ten. I, the eleven-year-old child, could not comprehend what I saw. I only saw how too high taxes are charged”, Zynoviy Maslo said.

To survive, people were forced to eat surrogates: “We were very emaciated. We were eating plants mostly, or roots, something rotten or something like that. Once I was playing with the whip near the fire. And that whip fell on fire, it shoved so hard, I pulled it out. And it smelled like fried … It was so fried that I started eating. A strap was such a crunch, I`ve eaten all “, – shares his memory Zynoviy Maslo.

Who had gold or silver items, took them to the “Torgsin” stores to survive: “Some were starving more,  the other were starving less. For example, during the imperial war one man in Pivni village was rewarded… by some sort of cross. And the state organized such torgsins during the famine – you give gold, jewelry and buy something there. And he had  how many… seven children, I mean, seven and two parents. And he handed this reward, and there he received for this reward a definite amount of food and survived. If he hadn`t had this reward, he might not have survived. “

Already being a mature person, Zynoviy Maslo asked himself how many people died in his native village as a result of the Holodomor-genocide crime. He tried to recall the names of the people who died on his street. Since he was 11 years old at the period of Holodomor, he knew only the inhabitants of his street: “One hundred and fifty souls were only from one street, one hundred and fifty souls died. Now, count how many streets are here… about nine hundred people from the population of about three and a half thousand”. All these names are included in the People`s Book of Holodomor Victims, which is stored in our museum.

Zynoviy Ivanovych also talks about the people who were taking the bodies of victims of the Holodomor out: “The chairman of the village council just appointed people who had the horse is, and said so:” You will take the dead out tomorrow “- and he was taking them out. For example, my neighbor was going to the field with my mate near the village council, village council chairman called him, saying: “Get to this house and take the dead man out of it by the way.” Well, this man has come there, there were two brothers… He asks: “Where is he?” – “It lies on the stove”, – says their sister. Well, on the stove on the burlap, then he says: “We took this burlap and took it out. But while we were carrying, the horses snored from that scent, you take it. “And on the next day, he can appoint someone else, and to carry the dead. The dead were taken out. “

In addition to physical destruction, the regime tried to eliminate the spiritual principles of life of Ukrainians. From the Cossack temple in the village of Pivni the authorities removed the bells and turned it into a storage for grain.

Maslo family was saved by the father who drove to Russia. When the peasants broke up their patience with constant robbery and starvation, they smashed the collective farm. However, Ivan Maslo well understood that this was only a temporary victory. Having slaughtered the cow, which he managed to return from the collective farm, his father took a little food for the trip and went out of his native village, and later took his family away with him.

So Zynoviy Maslo found himself in Leningrad region: “The father slaughtered the little cow. He put the meat in a sack or bag and left us. “And I will go away – I will go to Russia, because people say there is no famine in Russia.” Well, then the meat was left to us, and the father wrote a letter from the Leningrad region: “Get here, there is no hunger here.” So we were saved from hunger. There was born my sister there… As if it was here…  “

Summing up his terrible experiences of hunger, Zynoviy Maslo notes that only the memory of this crime will prevent us from such a future: ” It is necessary to tell, for the current generation to know about the Holodomor, what is the Holodomor! That in every village a thousand, five hundred people died, died, died … Let it did not return, God forbid, this Holodomor”.