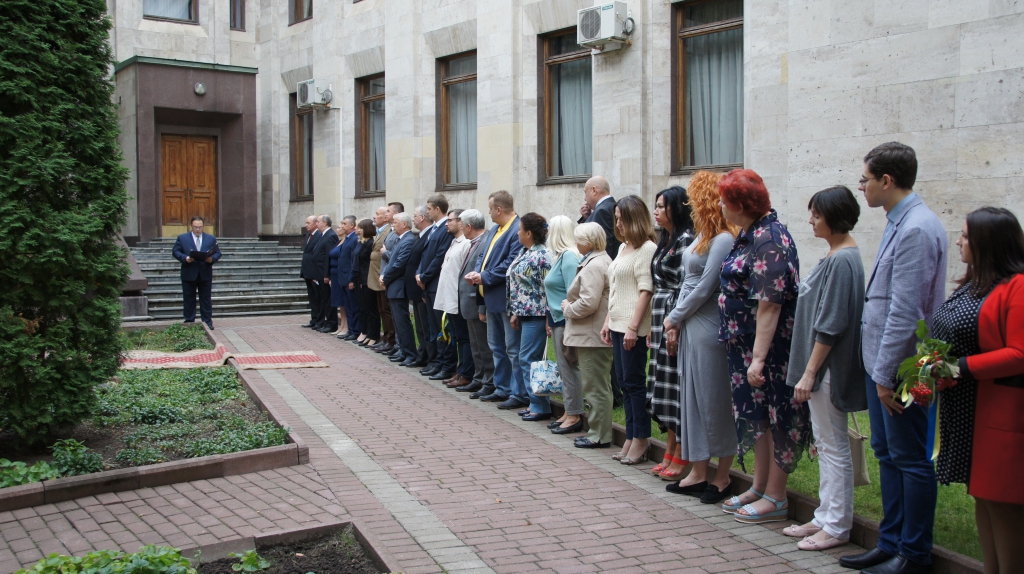 "Lets Lit a Candle of Memory" Action Was Held in Moskow

On September 12, 2018, the Embassy staff, representatives of the National Cultural Center of Ukraine in Moscow and organizations of foreign Ukrainians in the Russian Federation took part in the Holodomor Victims’ Genocide 1932-1933 Honoration in Ukraine, the press service of the Embassy of Ukraine in the Russian Federation reports.
The participants mentioned the names of 85 children who died of hunger, lit the Candle of Memory and put flowers to the memorial sign of the victims of the Holodomor-Genocide. The memory of millions of victims of genocide was celebrated with a minute of silence.
The participants of the event got acquainted with the materials of the photo-exhibition “Punished by famine”, revealing the tragic pages of the Holodomor, heard a thematic presentation of an expert historian, a representative of the Ukrainian community in Moscow, exchanged views.
We remind that on September 11, the marathon of the “Lets lit a candle of memory” was accepted by Uzbekistan.
On September 10 the action was held in Kazakhstan.
On September 9 the action was held in Azerbaijan.
On September 8 the action was held in Australia, Belarus and Senegal.
On September 7 action  was held in Armenia and Mozambique.
Also, the action was joined in Beijing.
The Ukrainian community in Jordan honored victims of the Holodomor-Genocide.
On September 2, 2018, the International action “Lets Lit a Candle of Light” was held in Turkey.
On September 1, the action “Lets Lit a Candle of Light” began at the National Museum “Holodomor Victims Memorial”
85-day campaign can be watched on the website.