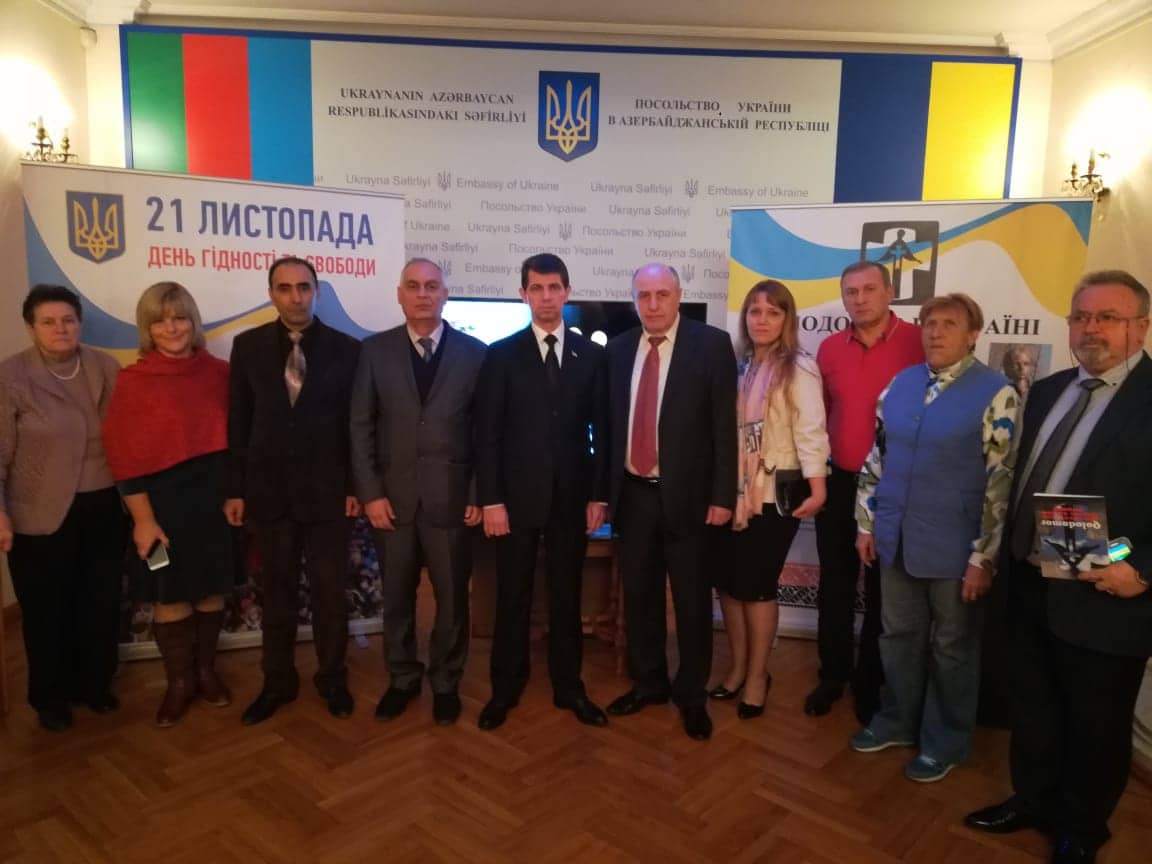 The event was attended by representatives of the National Academy of Sciences of Azerbaijan, Baku State University, Baku Slavic University, Azerbaijan Technical University of Social Sciences, political scientists, journalists, representatives of the Ukrainian Congress of Azerbaijan and the I. Franko Ukrainian community in Sumgayit city, as well as specially invited guest from Ukraine, doctor of historical sciences, professor of Taras Shevchenko National University of Kyiv (KNU) V. I.Serhiichuk.

Ambassador of Ukraine to Azerbaijan, Olexander Mishchenko, in his speech drew attention to the millions of Ukrainians who died as a result of the criminal communist regime policy, which led to Holodomor of 1932-1933 in Ukraine.

During the event, the participants honored the memory of the Holodomor victims of 1932-33 in Ukraine with a minute of silence, as well as the heroes who gave their lives to Ukraine and Azerbaijan in the struggle for the territorial integrity of both countries.

In his speech, Professor V. I. Serhiychuk informed the audience that the word “Holodomor” means a mass murder – a famine by which there was no salvation. By this word, Ukrainians call their National catastrophe and genocide of 1932-1933.

The precondition for Holodomor was the policy of collectivization, which caused the acute peasants resistance. Peasant unrest in February-March 1930 covered almost the whole of Ukraine. The checkers in their reports recorded that in Ukraine from February 20 to April 20, 1930, 1,895 villages in 41 districts out of 44, on which the territory was divided, were covered by unrest. In general, during 1930, more than 4,000 mass protests were recorded in Ukraine by intelligence services.

Professor V. I. Serhiichuk noted that the main goal of tHolodomor, organized by the Bolsheviks, was:

Professor V. I. Serhiichuk also informed the participants of the horrible stats according to which HOLODOMOR TOOK: at least 7 million lives.

For today, these data are not final because the Holodomor scholars justify it only to the archival data of Ukraine.

During the Soviet era, they tried to destroy a lot of information, but now Moscow refuses to open its archives regarding the criminal acts of the communist power of the USSR in Ukraine.

Given the above, historians believe that the objective number of victims was much higher and, after analyzing all unexplored documents today, the total number of victims will be much more than 7 million people, as reported in 1933 by German diplomats based on conversations with senior officials of the GPU.

This data is evidence of a crime that was organized against the Ukrainian people, and Ukraine has collected all evidence of genocide.

In his speech, the candidate of historical sciences, associate professor, dean of the historical faculty of BDU – Mr. Azad Rzayev noted that the consequences of the criminal acts of the communist regime had a significant impact on virtually all regions of the former Soviet Union. Holodomor in Ukraine in this context is of particular importance, as it has led to extraordinary losses among the peaceful population of Ukraine.