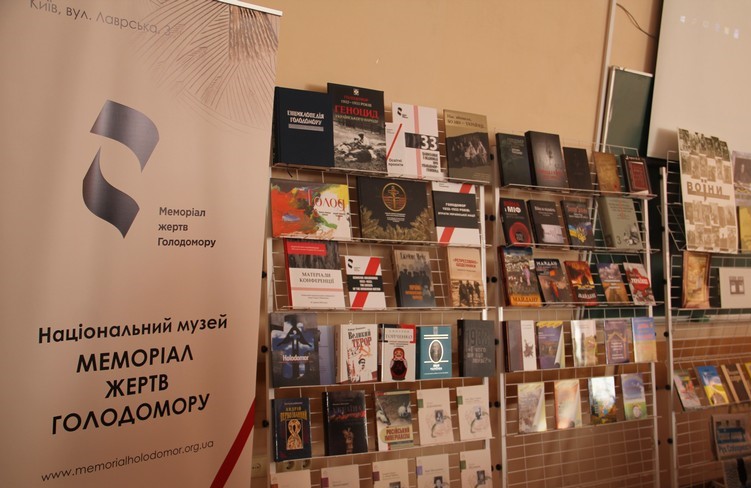 The Project "Books for 100 Universities and Libraries of Ukraine" Got a New Life!

National Museum “Holodomor Victims Memorial,” the Holodomor Research Institute, the Public Committee for Commemoration of the Holodomor-Genocide victims, the International Foundation for the Development of the Holodomor Victims Memorial, the Historical Memory NGO, as well as other non-governmental organizations with the support of the Security Service Ukraine, initiated and successfully implemented the educational and patriotic project “Books for 100 Universities and Libraries of Ukraine: A Struggle for Consciousness.”

Within the framework of this initiative, during April to June this year, the scientific libraries of 80 higher educational institutions of Ukraine of state ownership, the Vernadsky National Library of Ukraine, 24 regional universal scientific libraries, 76 city and district libraries received about 180 sets of books of total number of about 9 thousand books.

Our project is gradually expanding and has already involved not 100, but 181 libraries! We pay special attention to the eastern and southern regions of Ukraine, which need the greatest support in the struggle for their Ukrainian identity under the conditions of confrontation with Russian armed and informational aggression. All donated books are intended to fight for consciousness of youth, to form the national Ukrainian elite. “The victory is born not on the battlefield, but in libraries and universities,” with this message the project is moving by Ukraine, revealing the truth about various chronological periods of Ukrainian history, destroying firmly rooted “Soviet” and Russian imperial stereotypes.

Universities also received documentary videos (Ukrainian, English, Russian) about the Holodomor of 1932–1933 in Ukraine and American assistance to the starving Ukraine in 1921–1923.

Other chronological periods of the history of Ukraine were represented by such books as Short Ukrainian Regional Chronicles, Andrii Pervozvannyi by N. Dziubenko, The Day of the Cold Sun: Poetry by N. Dziubenko-Mace, “Brother’s” Attack: Wars of Russia against Ukraine in the XII–XXI centuries by V. Brekhunenko, V. Kovalchuk, M. Kovalchuk, V. Korniienko, The War for Consciousness. Russian Myths about Ukraine and Its Past and The Wars of the Ukrainian Cossacks with Russia in the XVI–XVII centuries by V. Brekhunenko, Saviors from the Turkish Cloud: Zaporizhzhia Cossacks and the Khotyn War of 1621 by S. Lepiavko, Ukrainian Winning in Viennese Battle of the Peoples of 1683, War and Myth. Unknown World War II. 1939–1945 and Petro Doroshenko by T. Chukhlib, Marshal Zhukov and Ukrainians in the World War II and Ukraine in the World War II by Lukianenko, Ukraine and Russia: Neighbors, Friends, Brothers , Enemies? by V. Kozhevnikov, Ukraine in the Struggle for Statehood in 1917–1921. Memoirs and Reflections by M. Shkilnyk, Roman Shukhevych by M. Posivnych, Great Terror. Stalin’s Purge of the Thirties by R. Conquest, The Chronicle of Great Cheat, Russian Imperialism and The Ark of Father Kovch  by H. Mohylnytska, Strict Conversation About “Yazyk” and “Mova” and What is the National Idea of ​​Ukrainians? by V. Kozhevnikov, Armageddon on the Maidan: Novel-Requiem by V. Baziv, Maidan after Maidan by O. Herasymenko.

Moreover, the active participation in the project was taken by the employees and specialists of the Security Service of Ukraine, who worked out and published the declassified materials of the State Archive of the Security Service. Of particular value for scientific libraries were the collections of published documents – voluminous special editions “From Archives of VUCHK–GPU–NKVD–KGB” and declassified materials of the Ukrainian and Polish secret services of the 1930–1940s. Scientists, students, and the public will broaden their knowledge about tragic pages of Ukrainian history. These books reveal the essence of the Soviet system and its crimes against the Ukrainian people.