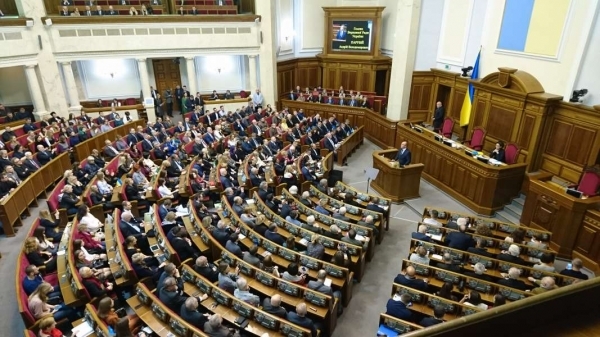 The Chairman of the Verkhovna Rada Andriy Parubiy noted: “According to the plan of the Holodomor organizers, the physical destruction of a large part of people, as well as the mental changes in the nature of Ukrainians as a result of suffering, should humble the freedom-loving spirit of Ukrainians, hold it in the territorial boundaries of the empire and in the spiritual dimension of the Russian measure”.

He said: “First, the land and personal property were taken away from the peasants. At the end of 1927, the Soviet governing bodies adopted a decision to collectivize agriculture. And in January 1928, forced forcible grain procurement began with the simultaneous destruction of high-yielding wealthy farms, which the communist regime called “kulaks”. By 1931 more than 352 thousand such farms were liquidated in Ukraine and about one and a half million people were literally robbed. “Pressure on intellectuals and representatives of the clergy, in which the government saw threats to the communist regime, also increased.

“The information component of genocide was a deliberate blocking of information about the famine. Those who wrote diaries about Holodomor, like Alexander Radchenko, or photographed as Mykola Bokan’, were convicted and sent to camps. You can also find archival investigations on them at our exhibition on the second floor”, said the Chairman of the Parliament.

He expressed special gratitude to the Ukrainian diaspora organizations who broke the walls of deliberate silence, lies and indifference, and provided a broad publicity on the topic of Holodomor in the world.

Also, A. Parubii thanked to parliaments and governments of all countries that officially recognized Holodomor of 1932-1933 as genocide of the Ukrainian people.

“Ukraine could not be destroyed! Despite the millions of victims, the Ukrainian people found the will and power to revive and escape from the Russian yoke “, – proclaimed the Head of the Verkhovna Rada.

However, according to him, “today, as well as 85 years ago, the same enemy fights against us – the imperial always retarded and dangerous in her own complexes Russia. And just as then, the enemy wants not only to physically kill the Ukrainians on the front, but above all else – trying to destroy the Ukrainian spirit, the Ukrainian Church, the Ukrainian language”.

A. Parubii expressed his conviction that Ukrainians will never allow anyone to destroy and disregard them: “Won’t let them take away the future of Ukraine! We have not forgotten anything and we will not forget – the enemy will pay for everything!”

Upon completion of the speech, the Chairman of the Verkhovna Rada announced a minute of silence.

The Most Holy Patriarch of Kyiv and All Ukraine, Filaret appealed to the attendees. His Holiness Patriarch said that he was speaking not only as head of the Kiev Patriarchate Church, as well as one of the last witnesses of Holodomor. “In 1932-1933, I was 4 years old, I remember well what was happening. But I did not understand what purpose and who is managing this. And what is the reason that, as parents said, the harvest was great in 1932, and there was no bread. And where did the bread go? They were taken out. And why have they been taken? Afterwards, when I began to investigate the causes of Holodomor,” – he said and added: “The reason for Holodomor was in the census of Ukraine’s population and , in general, of the Soviet Union, that has shown that the number of Ukrainians in the Soviet Union reaches 85 million and Russians – only 65 million».

According to him, “and therefore the wicked Soviet leadership, which was in Moscow, decided to destroy the Ukrainians so that they did not prevail over the number of the Russian people.” “This is one reason, because the census of 1939 shows that Ukrainians have become 65 million, and Russians have the opposite. The second reason is the words of Bukharin, who said who owns bread, he has power. The Ukrainian peasants owned the bread. And so they actually had power in them, according to Bukharin’s words. And so began the process of collectivization in order to convey the bread to the hands of Soviet power. But Ukrainians did not want to go to the collective farms, and this was the second reason for the destruction of Ukrainians”, – said the head of the Church.

The Head and Father of the Ukrainian Greek Catholic Church, His Beatitude Sviatoslav, spoke in the Verkhovna Rada of Ukraine. “We, with pain and sorrow, remember in these days the victims of a great tragedy, a crime against humanity. The wound that is inflicted not only on the Ukrainian people, but also on all humanity, is known by the word Holodomor. Today we want to pray to our Lord and Savior for all the sacrifices, because not we, God knows the name of everyone that is written on him on heavenly tablets,” – the UGCC head said. At the same time, he remarked: “But while recalling this tragedy, I would like today to mention the heroic pages of these years, all those who tried today to be the voice of those who have voted for today, those who saved someone of this great tragedy.” The head of the Ukrainian Greek Catholic Church remembered his great predecessor, the Righteous Metropolitan Andrii Sheptytskyi, “who was the first among all the leaders of the world opinion, who was the first church leader, together with his Galician bishopric, raised his voice in defense of the dying Ukrainians.”

“On July 24, 1933, our lords sent to the world community a historical letter entitled “Ukraine in the Deathly Hallows,” – he said. His Beatitude Sviatoslav recalled that “in that letter there are such words” the blood of the workers, who in the famine plagued the chernozem soil of Ukraine, calling for revenge to heaven all Christians of the whole world, all believers in God. And especially all workers and peasants, all our fellow countrymen, please join this voice of protest and pain. And to spread it to the most distant countries of the world.”

A national rescue committee was set up in Lviv on the initiative of Andrii Sheptytskyi, which was then supported by the Orthodox clergy of Poland, said the head of the UGCC. He spoke about the help from Western Ukraine provided Ukrainians who suffered from Holodomor.

During the meeting, Holodomor researcher, Ambassador Extraordinary and Plenipotentiary, expert in international law, Doctor of Law, Professor Vladimir Vasylenko spoke about the use of hunger as weapons of mass destruction of Ukrainian peasants.

Volodymyr Viatrovych, the chairman of the Ukrainian Institute of National Remembrance, addressed the audience.

He proclaimed that Ukraine could not be destroyed and he called for the honoring memory of all the Holodomor victims.

Deputy Speaker of the Verkhovna Rada Oksana Siroid gave the floor to the invited representatives of the parliaments and governments of the world.

They expressed support for the Ukrainian people, noting that “crimes against humanity have no limitation period and should be punished.” There was also a call to remember this terrible tragedy.

The meeting was attended by the Chairman of the International Coordinating Committee on Holodomor, General Secretary of the World Congress of Ukrainians S. Romaniv.

He spoke about the contribution of the Ukrainian diaspora to the recognition of Holodomor in Ukraine as genocide. S. Romanov assured that this work will be continued.

Ivan Vasiunyk, co-chairman of the Public Committee of commemorating the Holodomor-Genocide victims of 1932-33 in Ukraine, in his speech, emphasized that recognition of Holodomor as the genocide and the restoration of memory of him became a victory over fear.

He emphasized the need to continue work on the Book of Memory, the perpetuation of the memory of more than 7 million Ukrainians killed in these years.

According to the information department of the Verkhovna Rada of Ukraine.