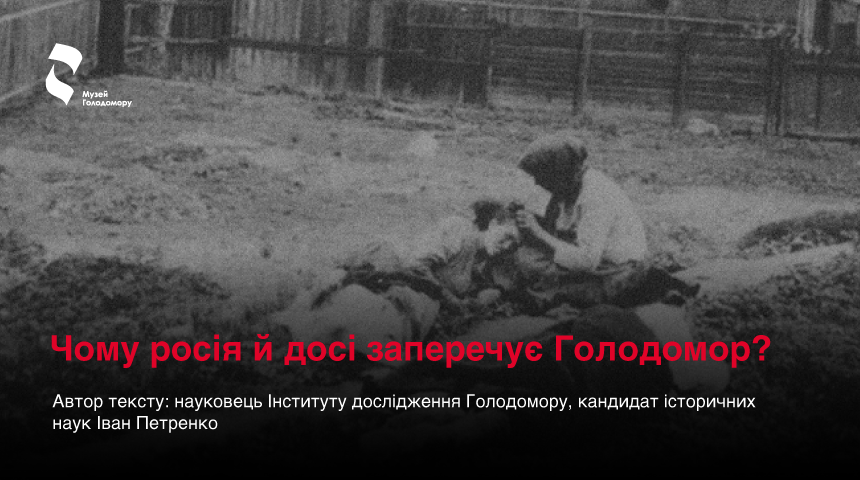 Why does Russia still deny the Holodomor?

Today, Russia is waging a war of aggression against Ukraine in order to restore its lost imperial status. At the same time, using the army and special services, Putin’s rashist regime is carrying out the genocide of the Ukrainian nation – the bearer of Ukrainian culture and identity. The Ukrainian civilians and infrastructure are systematically destroyed without any military expediency; Ukrainians (including tens of thousands of children) are being deported en masse from the occupied territories to the depths of Russia; destroying the Ukrainian culture and education system.

The rashist regime (whose leaders are from the Soviet state security agencies) operates absolutely in the paradigm of the Bolshevik criminal policy against Ukrainians. The Kremlin understood the main axiom a long time ago: as long as the Ukrainian nation exists, there will be an obstacle to Moscow’s imperialist aspirations.

90 years ago, the communist totalitarian regime led by J. Stalin sought to destroy the active and nationally conscious part of the Ukrainian nation, which was hostile to the new communist realities. In 1932-33, a genocidal policy was used against Ukrainians – a man-made famine, that was later called the Holodomor.

Throughout its existence, the communist regime tried to deny and conceal its crime in order to protect itself from possible responsibility. There was a purposeful struggle against spreading the truth about the Holodomor, which could threaten the existence of the Soviet Union by undermining Moscow’s power over Ukraine.

After the collapse of the USSR, this practice was continued by the Russian Federation. First of all, post-Soviet Russia, despite some democratization and liberalization, in general, did not give up its imperial, anti-Ukrainian aspirations, officially recognizing itself as the sole legal successor of the Union.

The policy of denying the Holodomor genocide gained particular scope with the rise to power in Russia of KGB-FSB officers led by Putin. They set themselves the goal of reviving the former Soviet empire in a new format, and it is difficult to do this without Ukraine. Initially unable to return to Ukraine by military force, the Putin regime sought to do so through political and economic measures. In order to strengthen pro-Russian sentiment among a large part of the Ukrainian population, the Kremlin cultivated a positive image of Russia in the minds of Ukrainians.For this, it was necessary to avoid, deny, and refute any facts about Russia’s crimes against Ukrainians. An active celebration of the exceptionally positive moments of the joint Soviet history began. In parallel, the gradual resuscitation of Stalin’s personality continued. He began to be idealized as the most successful Russian helmsman, under whose rule Russia supposedly became a global power, and in Ukraine an industrial leap took place, Ukrainian culture flourished, etc.

In this context, special attention was paid to the topic of the Holodomor as the most painful in the history of Ukrainian-Russian relations. Russian historians and propagandists were given the task of proving that the Soviet authorities did not plan any man-made famine, let alone genocide and that the famine of 1932-1933 was caused by climatic conditions, dekulakization policy, collectivization, etc. They emphasised the fact that these events are a common tragedy for the entire Soviet people. That it was not the Ukrainians as such who were destroyed, but in general the hostile class of farmers-owners within the entire Union. In order to justify these narratives favourable to the Kremlin, over the past 20 years, Russian historians and publicists have written hundreds of works and articles and published many collections of archival documents selected with a tendency.

In such conditions, to recognize the Holodomor and, even more so, its genocidal character is tantamount to suicide for Russia. It automatically destroys all the historical lies Moscow has been building for the past 90 years and exposes its true criminal essence. Recognizing the Holodomor as genocide will require Russian authorities and society to repent and apologize to Ukrainians for the crime committed, which for most Russians is tantamount to acknowledging their historical and moral defeat. That will jeopardize its historical and political image, negatively affect the implementation of its imperialist plans, and inevitably lead to instability and unpredictable consequences within the federation itself.

Author of the text: scientist of the Holodomor Research Institute, candidate of historical sciences Ivan Petrenko.