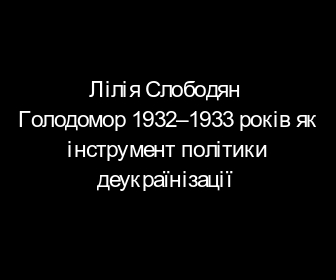 The relationship between the curtailment of the policy of Ukrainization, which later turned into the policy of de-Ukrainization, and the implementation of the artificially organized Holodomor of 1932–1933 is revealed. The national orientation of the Holodomor in the context of other repressive measures of the Soviet government is highlighted. The reasons and consequences of the repressive actions of the Soviet authorities, aimed at destroying the nationally oriented intelligentsia and the peasantry as the basis of the Ukrainian nation, are analyzed. According to the scale of the destructive consequences of the Holodomor and the end of the Ukrainization policy, they are assessed as genocide and ethnocide of the Ukrainian people.