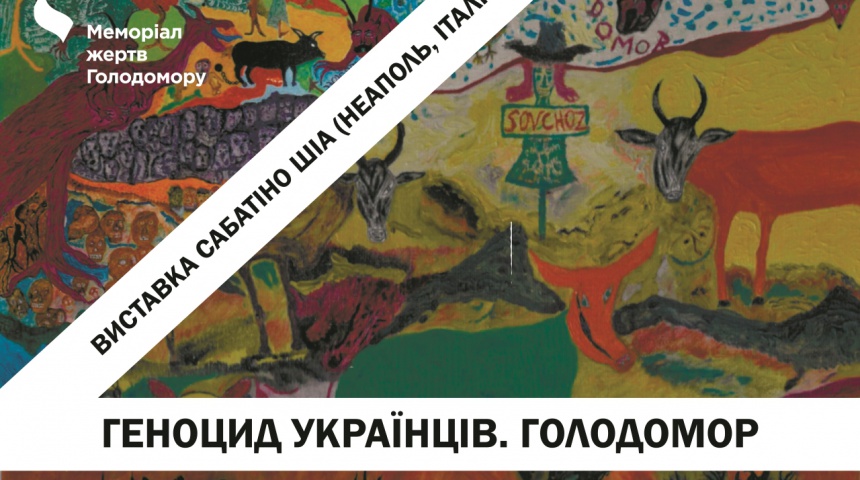 Exhibition of paintings by Sabatino Scia "Genocide of Ukrainians. Holodomor»

On September 18, 2018, writer and international artist from Naples Sabatino Sсia presented his works on the Holodomor in Ukraine. He created a series of paintings “Genocide of Ukrainians” (5 paintings), which tell the story of 1932 and 1933 through the characters that allegorically symbolize the Stalinist regime.

Sabatino Scia is a famous Italian fables author. For him, a fable is the way to report about the problems surrounding the society, both personal problems and problems of whole nations. It is absolutely natural that the writer’s work is closely connected with the language of painting. All his creative activity is aimed at the issues of everyday life as well as political themes and facts of history that influenced our existence today. Sabatino is the author of several fairy tales. All of his artworks are intended to talk about “things that can not be forgotten.”

In the paintings of the series “Genocide of Ukrainians. Holodomor”, the artist delivers the pain and despair of millions of dead, calling them the “wandering souls”. He also speaks about silence and concealment of the Holodomor. Used color tones, figures with stylized features, simple and mostly monochromatic lines mistakenly create the impression of a brilliantly peaceful landscape. The brightness of the colors seems to coincide with the drama of the depicted facts. Despite the cruelty of the topic, the language of painting is pointed at communicative simplicity, which often acquires children’s features.

The purpose of the exhibition is to explain inconceivable things in an attractive language, to tell inconvenient and cruel facts that the story of the Holodomor hides.

For the artist, simplicity and naivety are the main principles by which one can understand the human pain.