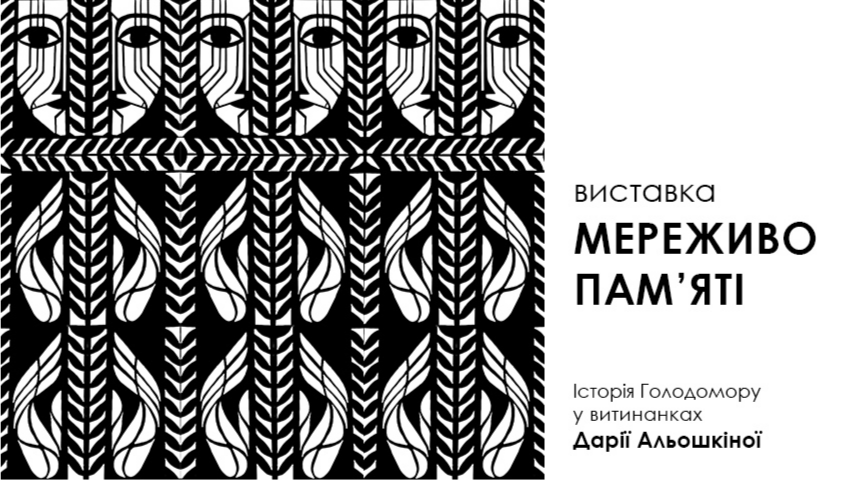 Daria Alyoshkina presented her project “Laces of Memory”, which was exhibited from November 26 to January 10, 2020, at the National Museum of the Holodomor Genocide. For the first time, Ukrainian papercuttings told not only about the images of folk culture, but also about the traumatic history of the nation—the Holodomor.

About the artist: Daria’s works are huge and are therefore used to decorate interiors, public places and book covers. All papercuttings are made on the border of authenticity and modernity. The artist managed to make tis art relevant in contemporary culture and conquer Poland, France, Belgium, the United States and South Korea. At her solo exhibition in Seoul, half of the exhibits was sold out by visitors, one of whom was the Prime Minister of South Korea.

The exhibition “Laces of Memory” was created at the intersection of traditional folk crafts and historical themes—the Holodomor. Some of the works are dedicated to the images of folk songs, Christmas carols and holidays. In the early twentieth century, the farmers formed a specific part of the Ukrainian nation against which the Holodomor genocide was committed, and kept Ukrainian traditional culture. At the same time, traditional culture was deformed and banned. The crime of genocide is not only physical murder, but also the destruction of the nation as such. Therefore, it is logical that the second part of the papercuttings thematically revealed stories about the Holodomor, based on the memories of people who survived the genocide.

For the first time, Daria Alyoshkina presented artworks about repressive “blackboards”, about the “five ears of grain law”, about the closed borders of Ukraine affected by famine, about the resistance of Ukrainians to Soviet rule, but also about bright feelings of mercy, support and assistance which permeate these terrible pages of our history.

Since the 19th century, Ukrainians have been making decorating their homes with vytynankas. With special small knives, folk craftsmen cut weightless and fragile napkins, cloths, and towels. The ornament of the vytynanka consisted of certain symbols, which told what the family was celebrating: whether it was Christmas, or a wedding, or a birth of a child.

Thematically, the exhibition is divided into two blocks. In the left part of the Hall of Memory, there were papercuttings created on the basis of Ukrainian folk songs and Christmas carols, images of traditional culture, and calendar holidays. Such images can be explained historically: the Holodomor genocide was directed against the Ukrainian nation. This block of papercuttings spoke about the soul of the Ukrainian people, about Ukrainians as a national group against which the communist regime committed genocide. In the right part of the Hall, there were the papercuttings created by Daria Alyoshkina on the basis of the memories of Holodomor witnesses about certain plots of the history of genocide.