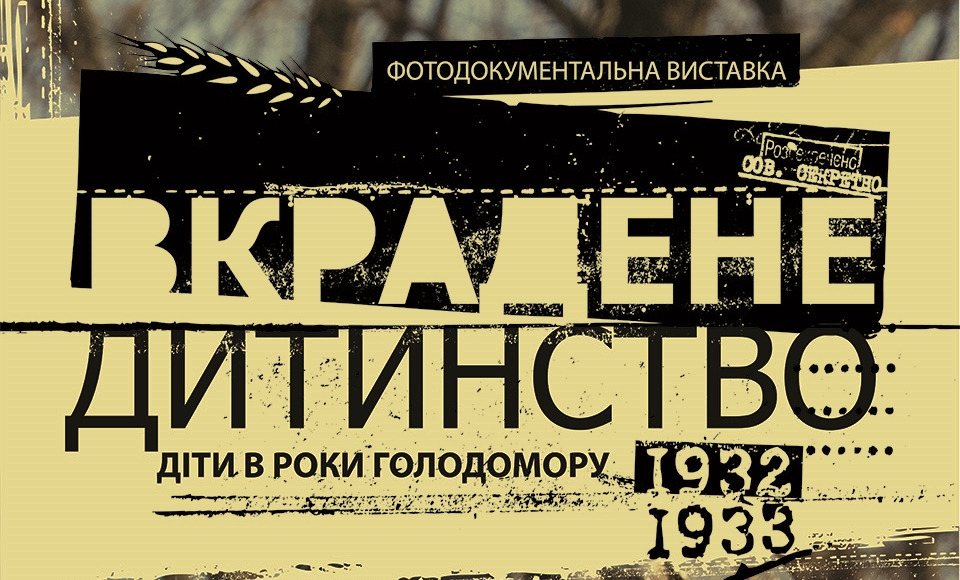 "THE STOLEN CHILDHOOD: CHILDREN DURING THE YEARS OF 1932–1933 HOLODOMOR"

Among the millions of victims of the genocide of the Ukrainian nation, the Holodomor, organized by the Bolshevik occupation authorities in 1932–1933, there is a special category—children. They were the most unprotected part of the Ukrainian national group, which was elected by the communist regime as the object of the crime of genocide. Despite the efforts of parents, who were often paying by their own lives, to protect them from starvation by all means, children, left without food for a long time, in addition to unbearable physical torture, suffered moral distress. They were not able to understand why the mother does not want to feed them, because they want to eat, and the father, who was always so strong, allowed to take everything edible out from their yard. Little children, as well as elderly people, were the first victims of famine. Sometimes the mother, trying to save the kids, took them to the city and left them at train stations, near the entrances to the apartment buildings, on the porches of hospitals, nurseries, kindergartens, orphanages. Although it was not always possible to survive there either: orphanages and nurseries often became death camps for children. And the authorities thought only about how to hide the crime and its victims. According to various historians, 1.5 to 4 million children died of starvation during Holodomor. And those who survived grew up and after decades told the descendants about the crime of genocide. However, they remained forever in the unofficial and unrecognized status of “Holodomor victims” in Ukraine (the term which historians use in their research).

In 2018, Ukraine and the whole world commemorated the 85th anniversary of the 1932–1933 Holodomor. To commemorate the Holodomor children, those who were killed and those who survived, the National Museum “Holodomor Victims Memorial”, together with the Ministry of Foreign Affairs of Ukraine and the World Congress of Ukrainians, on September 1, 2018 initiated an international action devoted to the children who did not go to school on September 1, 1933 and during the next seven years, because they died or were not born. Within the framework of the action, which will start on the territory of the Museum of 1932–1933 Holodomor in Myrgorod district (the department of the Myrgorod Museum of Local Lore). The action lasted for 85 days, every day in another country and another city, until the Day of Remembrance of Holodomor victims. At the start of the action, the exhibition “The Stolen Childhood: Children during the Years of 1932–1933 Holodomor” was presented. The chosen place is special and symbolic: from 1930 to 1934, a children’s orphanage in the system of the NKVD of the USSR existed there. It was created by Myrgorod Municipal KP(b)U body for the concentration of children, which were left unattended after the death of their parents (the so-called “kulaks”), or after filtration of the arrested families at the Mirgorod railway station, serving as a vehicle for refugees on the Kyiv–Kharkiv railway line.

The purpose of the exhibition is to tell about the life of children during the Holodomor from the moment when they were left on their own to the various ways of survival, the realities of that time, taking into account the issue of children’s rescue and the concealment of crime by the authorities. The aim of the exhibition is also to inform the public about the history of kindergartens and orphanages, etc.

The consultants are Nina Lapchynska and Arsen Zinchenko

During the Holodomor, on the territory of the Ukrainian SSR, the so-called “children’s shelters” were created. Thousands of children were dying from starvation in these institutions. Information about most of them is lost. If you have materials about the location of children’s shelters during Holodomor, please contact us by e-mail [email protected]