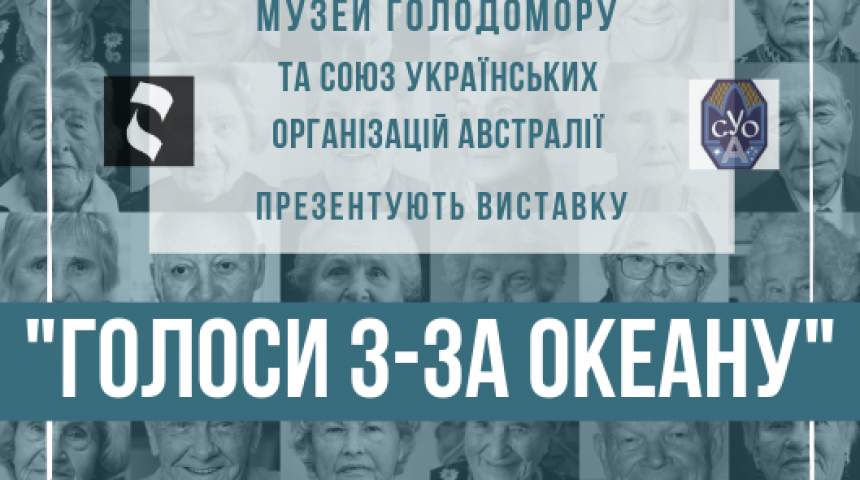 Voices from across the Ocean

The exhibition “Voices from across the Ocean” tells personal stories about the Holodomor of 1932-1933 of 21 people from 10 regions of Ukraine through personal photographs and memoirs, written in the form of letters. After the 1930s, eyewitnesses emigrated to Australia, where the project’s curators, Australians of Ukrainian descent, found them to gather their evidence and preserve the memory of one of greatest genocides.

The story of each hero is unique. Letters unite the voices of the inhabitants of large cities and villages; people from different social strata, and different experiences of survival during the Holodomor. The faces of these people are forever documented in black and white photographs.

The smiles of these elderly Australians hide the stories of Ukrainian children who survived the genocide.

Even with miles of land and oceans between Ukrainians, they will always be united by national identity, language, history, and collective memory, including the Holodomor. Visitors, aware of the connection with Australian witnesseses based on a common nation code, will be able to write letters in response to those whose stories have impressed them the most.

“We decided to focus on living witnesses to engrave their beautiful features when it is still possible. We gave them the opportunity to tell about their experience with their own voices, words and faces, because the face itself is a universal symbol of humanity. After removing the color, we ‘aligned’ the images, allowing us to focus on people’s faces; increasing the scale of the portraits allowed us to literally make them bigger than in real life, but still close to us.”

You can watch the opening of the exhibition “Voices from overseas” at the link.