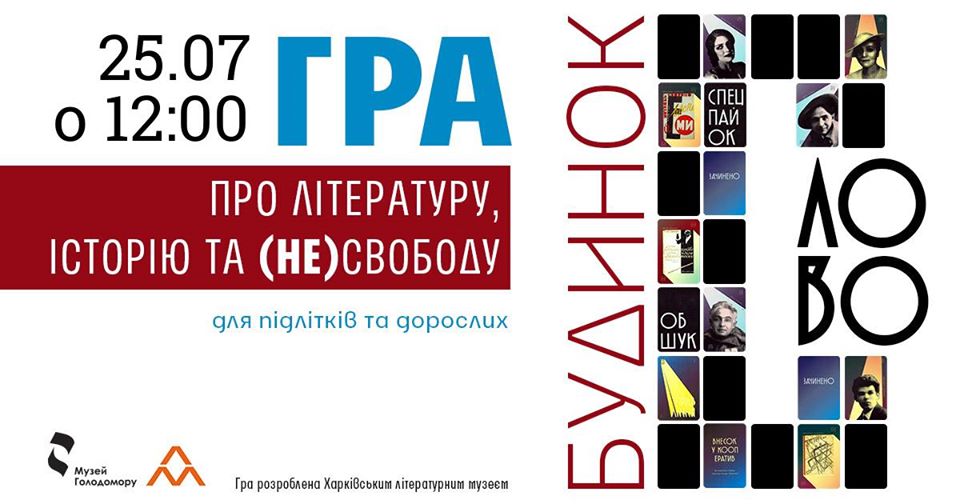 1930. Welcome to Kharkiv, the capital of the Ukrainian SSR.
The city, which building every minute, is filled with meanings, people and grandiose plans of the government.
Exorbitant housing prices forced artists to seek shelter in communal houses, communal kitchens and basements. In the mid-1920s, cultural figures asked the authorities for a house that would become a cooperative home for writers.

Built in the late 1920s and inhabited in 1930, the Slovo building is located in Kharkiv at 5 Red Writers Street, now — 9 Kultury Street. A place, where almost all the most famous literary figures lived, — writers, critics, editors and illustrators of that time.

What is the “Slovo House” game?
The game allows you to feel the atmosphere of life of the 1930s, when creativity coexisted with censorship and a depressing fear of arrest. Participants will be able to see portraits and autographs of the inhabitants of the house, covers and illustrations of their books, learn stories from their private and creative lives and even try on the role of a sexist or photojournalist.
The game “Slovo House” was developed by the Kharkiv Literary Museum.

Why are we holding this game at the Holodomor Museum?
The arrests of the house’s residents began almost immediately after it was occupied in January 1931. By 1938, most residents had been repressed. The House of the Word recreates the realities of the 1930s through a game: dekulakization, torgsins, and searches used by the totalitarian regime against Ukrainians who knew how to analyze, think, criticize, and protest.
Raphael Lemkin, the author of the term “genocide”, called the destruction of the intelligentsia — the “brain of the nation” — one of the components of the genocide of the Ukrainian nation, introduced by the Soviet authorities.

Participation is free. Number of participants are limited.
WHEN: July 25;
TIME: 12:00 (duration — about 1 hour);
PLACE: Holodomor Museum, st. Lavrska, 3 (10 minutes from the Arsenalna metro station);
Pre-registration is required: group is of up to 5 people
You can register at the link: https: //forms.gle/DNEAtTTUcn6H8VL46

We follow the quarantine instructions and safety rules, so we ask you to use protective masks.
Additional information: 044 254 45 11, [email protected]