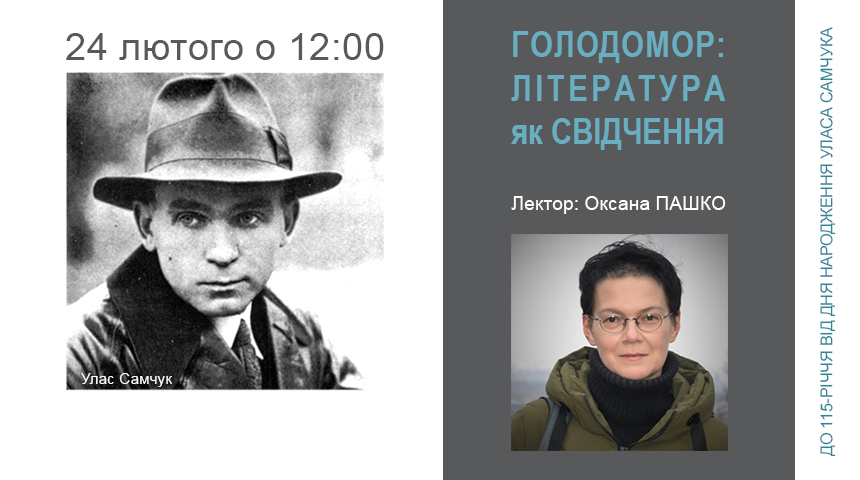 Lecture “The Holodomor: Literature as Testimony”

«The most horrible death is death ofrom starvation.

I do not wish even my enemies died by such death…»

On February 24, at 12:00, in the Holodomor Museum, a lecture “The Holodomor: Literature as Testimony” will be held to commemorate the 115th anniversary of Ukrainian emigrant writer Ulas Samchuk, the author of the first novel about the Holodomor of 1932–1933.

The speaker is Oksana Pashko, Candidate of Philological Sciences, associate professor of Department of Literature Studies of National University of Kyiv-Mohyla Academy. Her topic of study is the literature of 1920–30s.

In the literature of 1920s, a few wrote about mass man-made famine of 1921–1923. It was written more about personal human experience, and less about its political causes. When it comes to the Holodomor of 1932–1933, for some time only diaspora was able to speak of it aloud.

The writers respond to traumatical historical events, and the Holodomor was not an exception. Ulas Samchuk well remembered the events of mass man-made famine of 1921–1923. He wrote the novel Mariia in 1933, when he lived in Czechoslovakia and could communicate with those who managed to escape from the Soviet Ukraine, where people starved en masse.

Mariia is the first novel in Ukrainian literature covering the issue of forced collectivization, so-called dekulakization of truly hard-working farmers, and the Holodomor.

According to Ukrainian literary critic and scholar Stepan Pinchuk, Ulas Samchuk was “the one who reflected in his work the tragic fate of the Ukrainian people in the XX century.” The author pictured the tragedy of one farmers’ family in the framework of the crime against the whole nation.

See you in the museum!