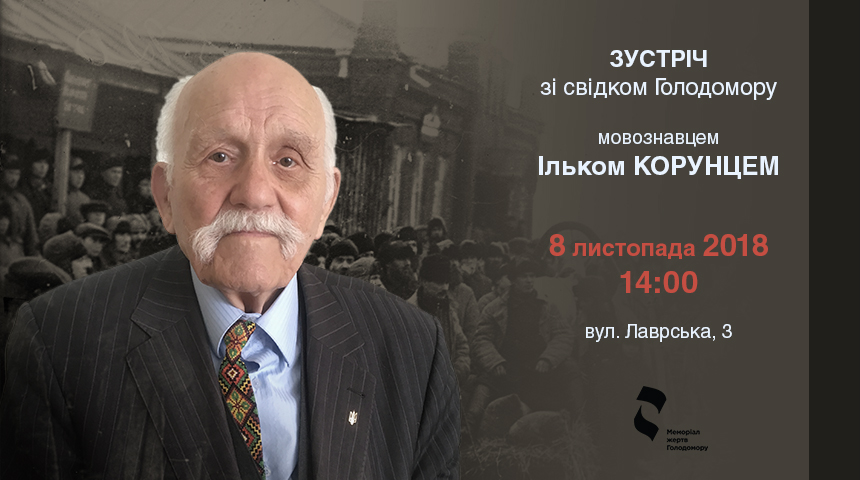 National Museum “Holodomor Victims Memorial”, within the framework of the “Oral History of Holodomor” project, continues the series of meetings with people who have witnessed the crime of genocide of the Ukrainian nation.

We invite all those who are interested in Holodomor history to meet with Ilko Korunets, an outstanding linguist, translator, literary critic, professor of the Department of English Philology and the translation of the Kyiv National Linguistic University.  The meeting will be held on November 8, 2018.

Throughout his life Ilko Korunets have been working in order to bring Ukrainians to the values ​​of European culture. He was translating from English, German and Italian, the texts of James Fenimore Cooper, Arthur Rambo, Oscar Wilde, Gianni Rodari, and others. He was an active participant of the shistdesiatnyky movement against the Russification of the Ukrainian language.

Ilko Korunets has survived Holodomor in Cherkasy region. Because of the genocide, he lost two sisters and a brother, had no childhood, because he had to grow up quickly, when the tears, pain, famine and death appeared in his family:

“I was under the bombings. I suffered terrible difficulties during the Second World War. However! The worst thing I remember is life when I was 12 and Holodomor! “

You will be able to hear more memories, as well as an analysis of that time, during the meeting.