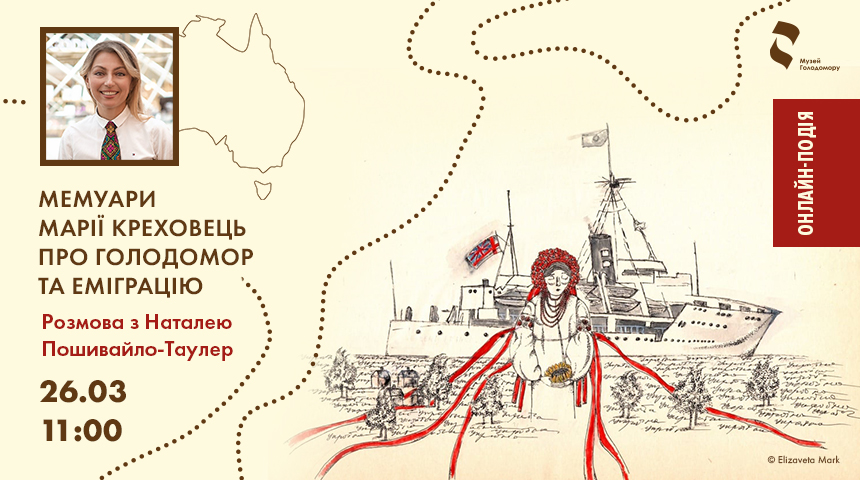 Memoirs of Mariia Krekhovets about the Holodomor and emigration. Talk with Natalia Poshyvailo-Tauler

On March 26, at 11:00, an online talk about the book by Mariia Krekhovets, the memory of the Holodomor and the Ukrainian diaspora in Australia will take place. The speaker is Natalia Poshyvailo-Tauler, vice-president of the Ukrainian World Congress and publisher of the book of memoirs Through the Fire over the Water.

The conversation will be broadcast on the Holodomor Museum’s Facebook page.

Through the Fire over the Water are the memories of Ukrainian Mariia Krekhovets, who was born on a farm in Poltava region and emigrated to New Zealand. The book tells about the beginning of the 20th century in Ukraine, the national liberation movement, the Holodomor and resettlement for thousands of kilometers from the homeland.

“Already in old age, the idea arose to leave a monument in this world about my life. …As a little girl, I survived the famine of 1933, then the Second World War, which took away the best days of my youth, and then there was work in Germany. … After the war—a journey to a settlement in New Zealand. …This is how the divination about me came true: I had to go through fire and water to the end of the world,” the book about Mariia’s life begins.

Initially, these memoirs were published in English. Then they were translated and published by Mariia Krekhovets’ son Oleg.

Maria Krekhovets started writing diaries as a young woman in a displaced persons camp (DP) near Magdeburg, Germany. So year after year 12 notebooks were collected. At an older age, the Ukrainian rewrote her memoirs on a typewriter. And after the woman’s death, her husband Vasyl Krekhovets handed over these diaries to Natalia Poshyvailo-Tauler.

You can learn more about the book on the Facebook page of the book.

Join the conversation, leave your questions for the speaker in the comments to the live broadcast and learn more about the history of the Holodomor genocide.