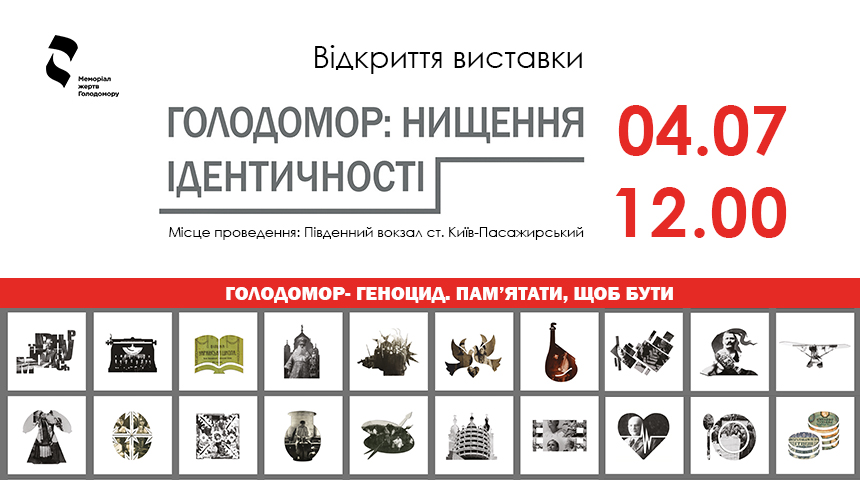 On Thursday, July 4, 2019, in the lobby of the Southern Station of the Kiev-Passenger Station, National Museum “Holodomor victims‘ Memorial“ will present an informational exhibition project “Holodomor: Destruction of Identity.”

The series of design posters inform about unique subjects and phenomena of culture and science, social development and everyday life, about Ukrainians who have changed history, about everything that forms our identity, and than was destroyed, eliminated or deformed after the occupation of Ukraine by the Bolsheviks. And the Kiev Railway Station – this most populous transport center of Ukraine and the largest gates of the capital – will bring the project to an unprecedented scale and will cover as many Ukrainians as possible from different corners of Ukraine and foreigners.

We invite all those who wish to visit the opening or to get acquainted with the exhibition during July-August, as well as to watch the video on the station information board!!!

The “Holodomor: Identity Destruction” project was created by the employees of the National Museum “Holodomor victims‘ Memorial“ in cooperation with approximately 10 museums and archival institutions of Ukraine until the 85th anniversary of  Holodomor-Genocide. In the form of a banner exhibition it was exhibited already in more than 5 museums throughout the territory of Ukraine, on the basis of which the museum issued a brochure, and as a series of information posters he “traveled” in all metro of Ukraine – in November of  2018 in Kyiv, in May of 2019 inDnipro, in June of 2019 in Kharkiv. Now we go out to the overcity level and are opened at the Kiev Railway Station!