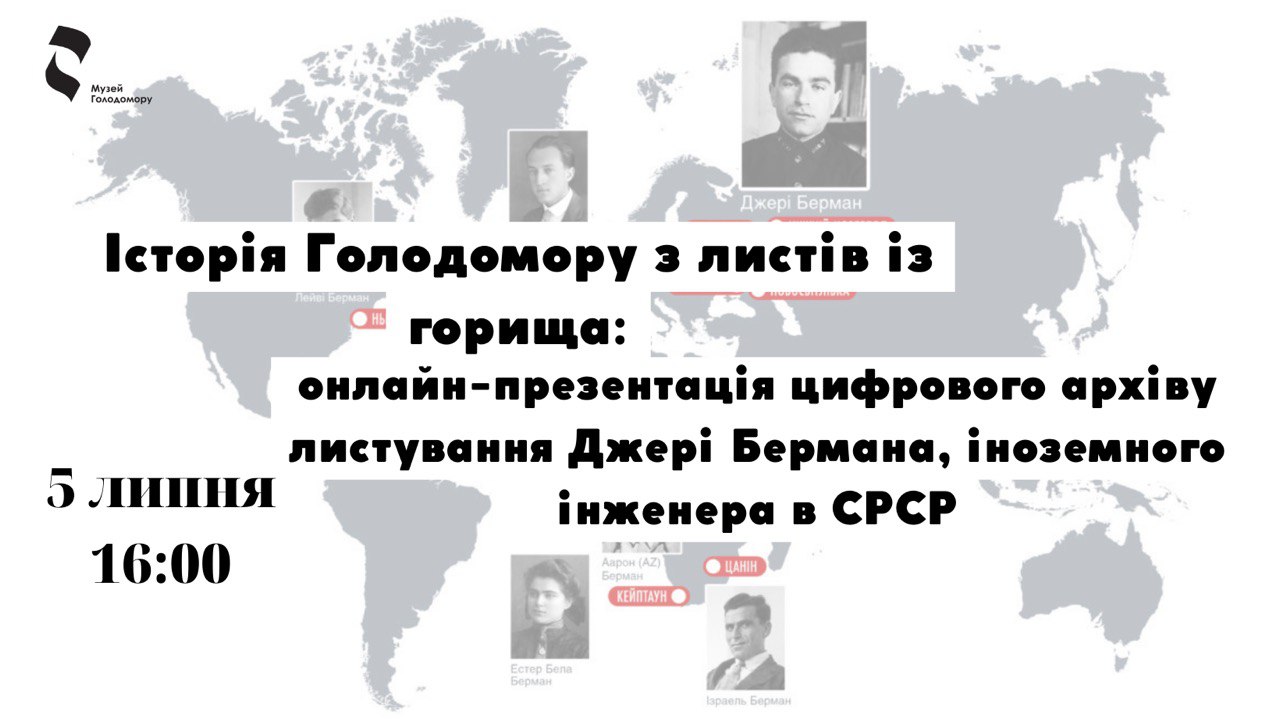 Online presentation of the web page with Jerry Berman’s letters, an engineer from South Africa who witnessed the Holodomor of 1932-1933

On July 5, 2022, there will be an online presentation on the website with Jerry Berman’s letters, an engineer from South Africa who witnessed the Holodomor of 1932-1933.

The information in Jerry Berman’s letters testifies to the details of the course of the Holodomor-genocide, presented from the position of an involuntary witness. In addition, new discoveries of testimonies or memories of foreign specialists increasingly destroy the image of Stalin as an effective manager and shed light on the negative consequences of the methods of implementing his policies. The Soviet press and historiography first belittled the role of foreigners in implementing industrialization, and then generally “forgot” about them, which created an ideal image of “successful” independent industrialization.

The presentation will start at 16:00 on the Zoom platform with broadcast on the official Facebook page of the Holodomor Museum.

To participate, please register via the link – https://forms.gle/oCKCNieZiwsy4hXz5

“Jerry Berman’s testimony is a contribution to spreading the truth and knowledge about the Holodomor. His words once again reveal the terrible side of Stalinist industrialization and reinforce the thesis that human life is of the highest value. No factory, no tractor, and no highway can justify killing people. Without Stalin, Ukrainians would have hydroelectric stations, factories, tractors, and, most importantly, they would have their own lives,” – Yana Hrynko, head of the exposition and exhibition department of the National Museum of the Holodomor-Genocide;

These letters were presented to the public for the first time on September 7, 2021, during the opening of the updated Hall of Memory of the Holodomor Museum.

Speakers of the event:

Yana Hrynko – head of the exposition and exhibition department of the National Museum of the Holodomor-Genocide;

Alison Marshall is the granddaughter of Meyer Fortes, with whom Jerry Berman corresponded;

Roman Moldavskyi – candidate of historical sciences, methodologist of the exposition and exhibition department of the National Museum of the Holodomor-Genocide, who researches Berman’s correspondence;

Sara Nesteruk is a British artist, animator, author of the “Recipes for Baking Bread” project, and lecturer at the University of Huddersfield;

The binder with Jerry Berman’s letters was found in the attic by the British Alison Marshall, whose grandfather – Meyer Fortes – was a friend and one of the addressees of the engineer. This find is a unique testimony, an essential source of information about the 1930s in Ukraine, and directly about the living conditions of workers during the Holodomor.