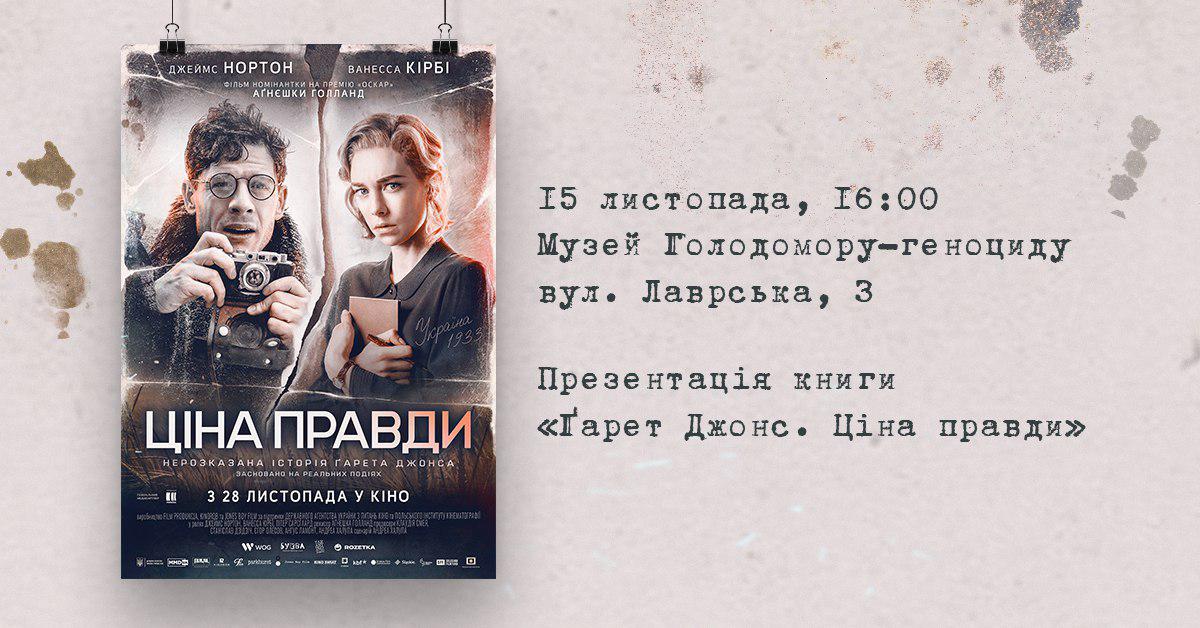 Presentation of the Book “Gareth Jones. Price of Truth”

We invite you to the presentation of the book Gareth Jones. Price of Truth, published by Zhnets Publishing House. The book includes selected articles and a chronicle of the life and memory of Welsh-born British journalist Gareth Jones.

The book is published in two languages, Ukrainian and English, on the initiative of the publisher, and Maryna Zhenchenko and Yaroslava Prykhoda, associate professors of the Department of Publishing and Editing of Institute of Journalism of Taras Shevchenko National University of Kyiv. It is devoted to the premiere of the historical thriller “Price of Truth”, which tells the story of the journalist Gareth Jones and shows the most tragic Ukrainian events from his point of view. It shows the Soviet Holodomor genocide against the Ukrainian nation in 1932–1933.

The basis of the book was the Bachelor’s book project Journalist Gareth Jones, performed by Valentyna Pasichna and Olena Tyshchuk, the students of Institute of Journalism of Taras Shevchenko National University of Kyiv.

Participants of the presentation:

Olesia Stasiuk, Director General of the National Museum of the Holodomor Genocide

The entrance to the event is free upon the registration at: forms.gle/GdvmipbqDsZYrx1h9

Number of visitors is limited.

In 1933, Welsh reporter Gareth Jones looks for his next big history. The last news lead him to Moscow, where he gets acquainted with journalis Ada Brooks. She reveals him the truth about “Soviet utopia,” which is different from the reality. In spite of death threats, Gareth starts his investigation. Hiding from the USSR special services, step by step, he discovers the crimes against the Ukrainian nation: the Holodomor, strict censorship, conspiracy and mass repressions. His articles would become the basis for George Orwell’s novel Animal Farm.