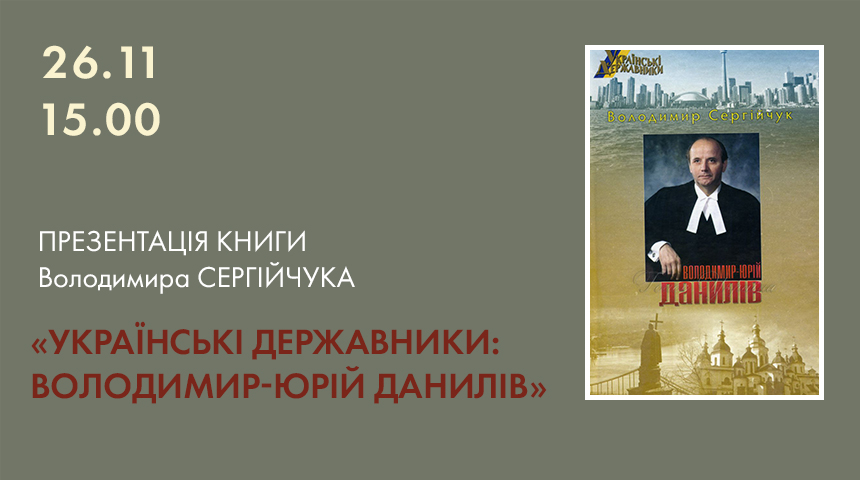 We invite you to the presentation of the book by Volodymyr Serhiichuk, “Ukrainian statesmen: Volodymyr-Yuriy Danyliv.”

On November 26, Volodymyr Serhiychuk’s book “Ukrainian Statesmen: Volodymyr-Yurii Danyliv” will be presented. The presentation will start at 3 pm in the Hall of Memory of the National Museum of the Holodomor Genocide (Kyiv, 3 Lavrska Street).

Olesia Stasiuk, the Director General of the National Museum of the Holodomor Genocide.

Volodymyr Serhiichuk, the author of the book “Ukrainian Statesmen: Volodymyr-Yurii Danyliv,” Chairman of the International Association of Holodomor Genocide Researchers, Head of the Department of World Ukrainian History at the Taras Shevchenko National University of Kyiv, Doctor of History, Professor.

Attending the event is only possible if you have a vaccination certificate or a negative PRL test.

It has happened more than once in our people’s history when it, stateless, could be crucified on the highest Golgotha, and the criminals not only did not get punished, but they continued to sharpen their knives on Ukrainians.

In 1932-1933, in the USSR and far beyond, the communist propaganda apparatus changed reality and replaced the concept, demonstrating the “pseudo-successes” of industrialization, collectivization, and the social sphere (the formation of a “new man”). The crime of genocide against Ukrainians was silenced and covered by the communist totalitarian regime for decades.

Despite this, some people spread the truth about the Holodomor. In 1983, Volodymyr-Yurii Danyliv, a Ukrainian lawyer from Toronto and a native of Lviv, initiated the creation of the International Commission of Lawyers before the World Congress of Free Ukrainians. He made a lot of efforts to get from the indifferent Western democracy too timid steps to return the Ukrainian truth!

Volodymyr-Yurii Danyliv, as a public leader of Ukrainian industrialists in Canada, was the promoter of the Department of Ukrainian Studies at the University of Toronto. It was he who organized the Committee of Friends of Crimea in Canada.

For more information about our projects and to support them, please contact us by e-mail [email protected] or phone us +380997609726 (Olha Yurchuk, communicator of the Museum).