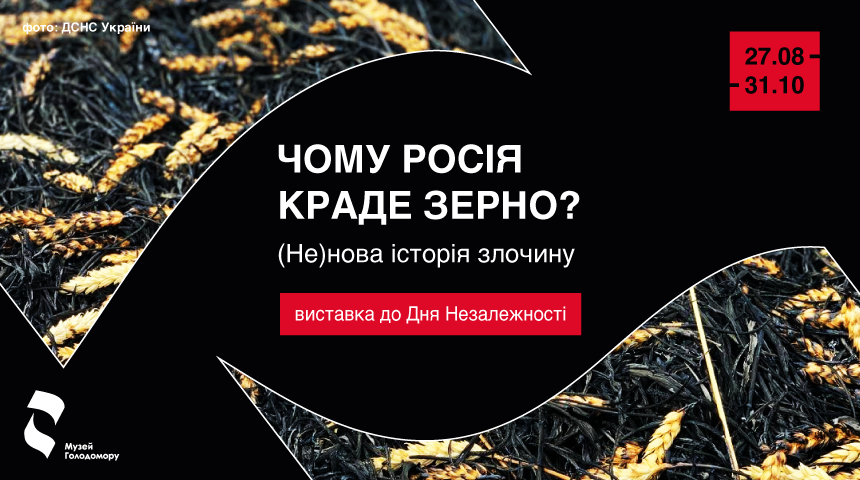 “WHY DOES RUSSIA STEAL GRAIN? (NON)NEW HISTORY OF CRIME”: an exhibition of the Holodomor Museum for the Independence Day of Ukraine

In its war of aggression against Ukraine, Russia is resorting to cruel and deplorable measures, such as starvation. Disrupted sowing campaign, the theft and export of Ukrainian grain, seizure of elevators, loading complexes, agricultural machinery and entire agricultural enterprises and, finally, deliberate mass artillery shelling of farming lands, the harvest on which was either destroyed by fire or became unfit for harvesting.

|It is not a new phenomenon in our history. Exactly 90 years ago, Bolshevik Russia organized the Holodomor and killed millions of Ukrainians to keep Ukraine within the borders of the USSR. With famine, Putin’s regime is now intimidating the world to force Ukraine to capitulate. It again uses Ukrainian grain as a weapon to break and subjugate the Ukrainian nation.

This historical spiral, about grain as a symbol of freedom and independence and the Russian-Ukrainian confrontation throughout the ages, including in the modern war, will be discussed as part of the exhibition and informational project of the National Museum of the Holodomor-Genocide, which will start on August 27, 2022, in the Hall of Memory (Kyiv, Lavrska St., 3).

The heroes of the video evidence, filmed by the Ukrainian documentary film studio BABYLON’13 and exhibited in the Hall of Memory, will tell the price of the 2022 harvest and what our defenders are dying for. And the visitor will be able to smell the bitter smell of burnt wheat from the fields of the Sumy region and Mykolaiv region, which was not destined to become bread because of the war and the Russians.

As part of the exhibition, the Holodomor Museum will hold several professional meetings and discussions on the topic of the agrarian crisis in the world and the subjectivity of Ukraine, which became evident to everyone through the prism of the war.

The curator of the project is Yana Hrynko.

For more information, do nоt hesitate to get in touch with the Museum’s communicator, Olha Yurchuk: +38 0997609726