Photos from the funds of the Holodomor Museum

The funds of the National Museum of the Holodomor-genocide store photographs that the Museum team collected thanks to painstaking work with Holodomor witnesses, their relatives and caring people who sent photos to our Museum.

Each picture is a biography of an individual or an entire family. These are the stories of those who survived the Holodomor and those who did not.

Unfortunately, not so many photos of the Holodomor period were preserved. It is also not uncommon for descendants in the third or fourth generation not to know those depicted in these pictures. At the same time, the value of each photo lies precisely in the ability to identify the people depicted on it, and to learn their stories, because it is from them that the past of our country is woven.

In this section, we publish the most interesting photos from our museum collection.

We appeal to the visitors of our site: if you have photos from the Holodomor period in your family archive, please donate them to the funds of the Holodomor Museum (contact e-mail: [email protected]). Let’s save history together!

Roman Slobodian and Feodosia with their children Maria (born in 1923), Antonina (born in approximately 1929), and Ivan (born in 1926) from Ziankivtsi village, Khmelnytsky district, Khmelnytsky region. The family photo was taken approximately in 1931–1932.The Holodomor witness Slobodian (Kashchak) Anna Pavlivna (born 1929) handed it over for safekeeping. In the photo is the family of her husband, Ivan Slobodian (pictured right). Sister Antonina (in the centre) died of famine in 1933. 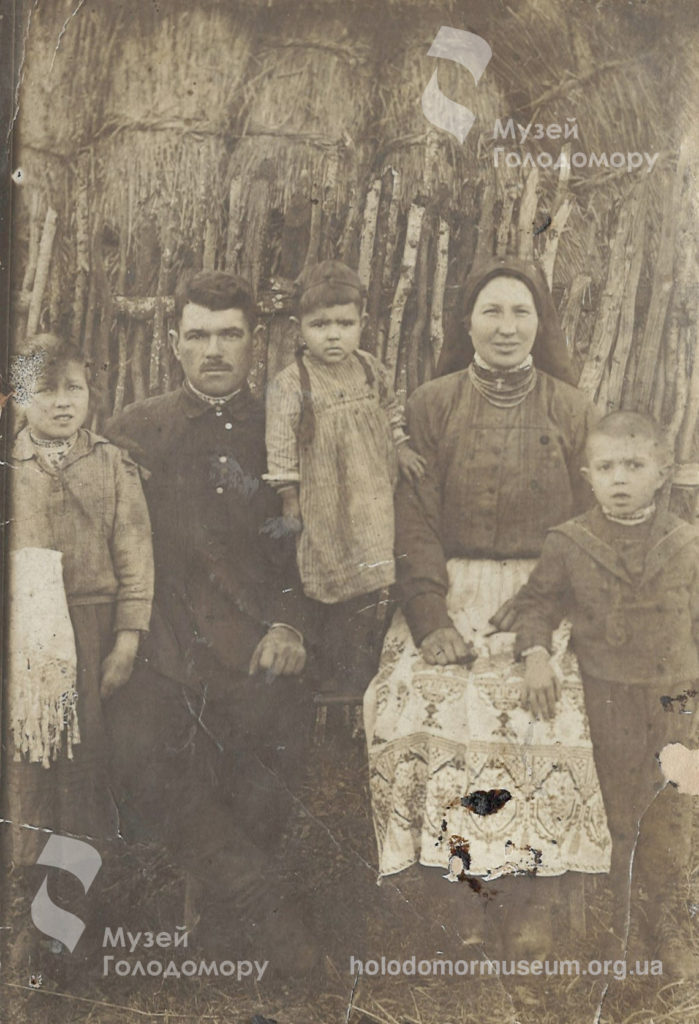 Second-grade pupils and a teacher from the village of Postavmuki (Postav-Muka) in the Poltava region. The photo was taken on January 25, 1933 (according to the signature on another copy of the photo, which is kept by Viktor Mykolaiovych Mozhchil). On the back of the given photo, there is an inscription: "...in memory of our 2nd grade...pupils who were there then and who died." The picture is from the Ivanenko Viktor Ivanovych's family archive, Uzhhorod, son of Ivan Yosypovych Ivanenko (born in 1924, in the photo in the third row, the third from the left in a hat with earflaps). A Holodomor witness claimed that only half of the pupils depicted in the photo survived the genocide. 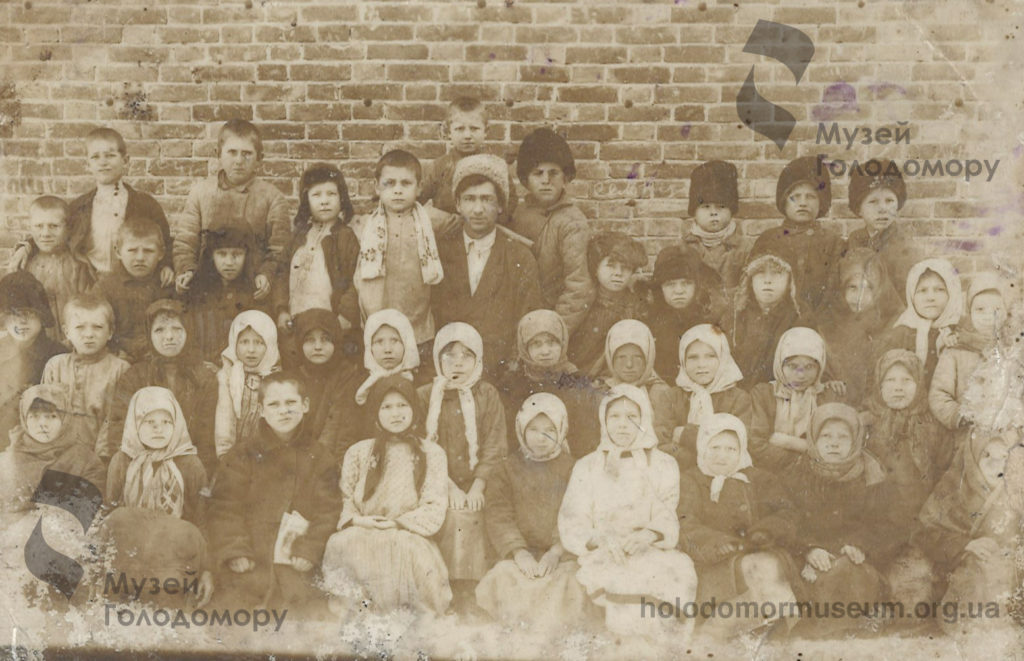 Maria Vobla and her son Vasyl. The photo was taken approximately in 1926–1928 in the village of Piskoshyne, Melitopol district, Zaporizhzhia region. Vobly Oleksiy Vasyliovych (born 1881) and his wife, Maria, rescued children during the Holodomor. In 2021, the photo was handed over to the Museum by Oleksiy Vobly, the grandson of Maria and Oleksiy Vobly, for permanent storage. 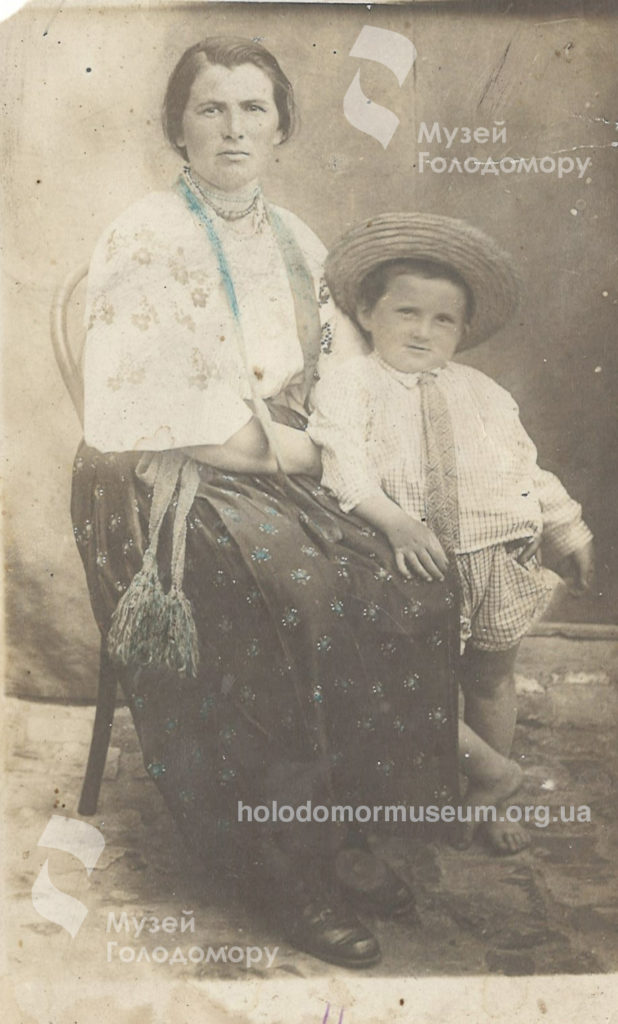 Oleksiy Vobly with his students. 1930, the village of Piskoshyne, Veseliv settlement territorial community, Melitopol district, Zaporizhzhia region. Vobly Oleksiy Vasyliovych (born 1881) and his wife Maria rescued children during the Holodomor. In 2021, Nina Borysivna Moshenska, a resident of the village of Piskoshyne and a local amateur historian, handed over the picture for permanent storage to the Museum. 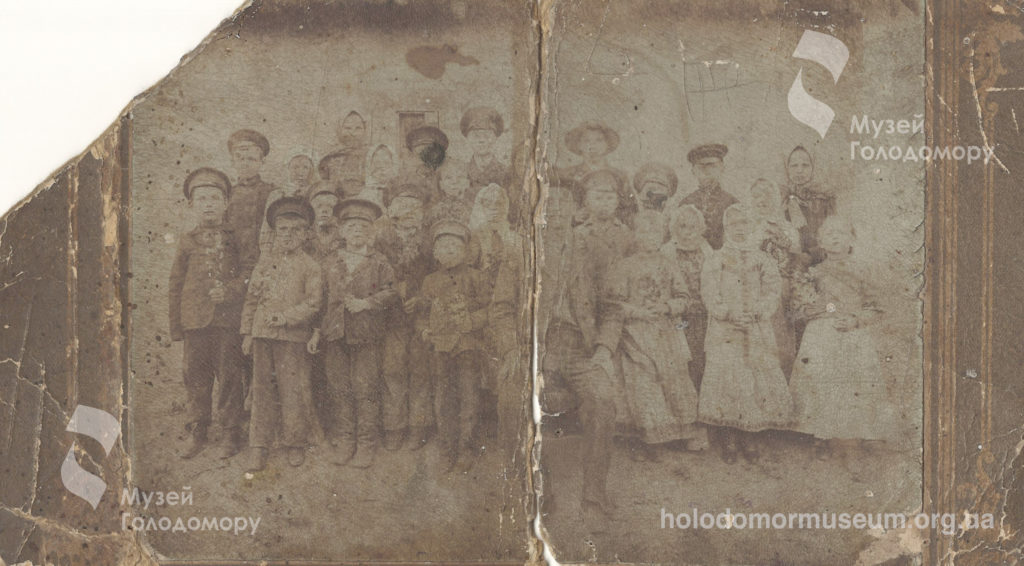 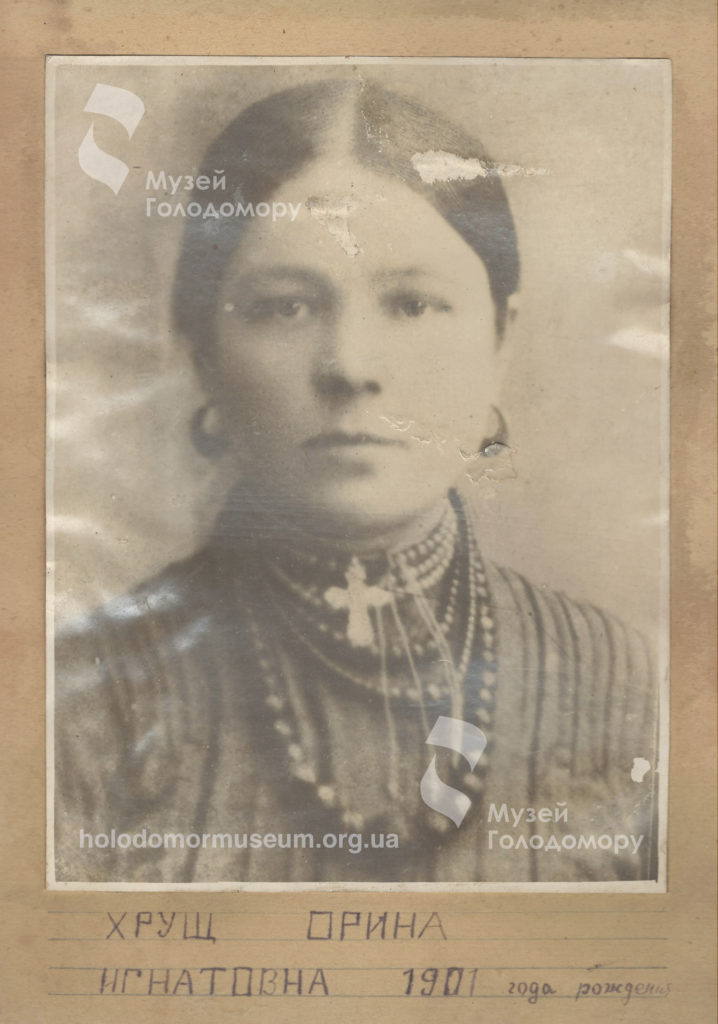 A photo of the parents of Holodomor eyewitness Fedora Oleksiivna Vashchuk (born 1925), who survived the Holodomor in the village of Pidhaitsi, Kropyvnytsky district, Kirovohrad region. The photo was taken in the early 1920s in Central Ukraine. 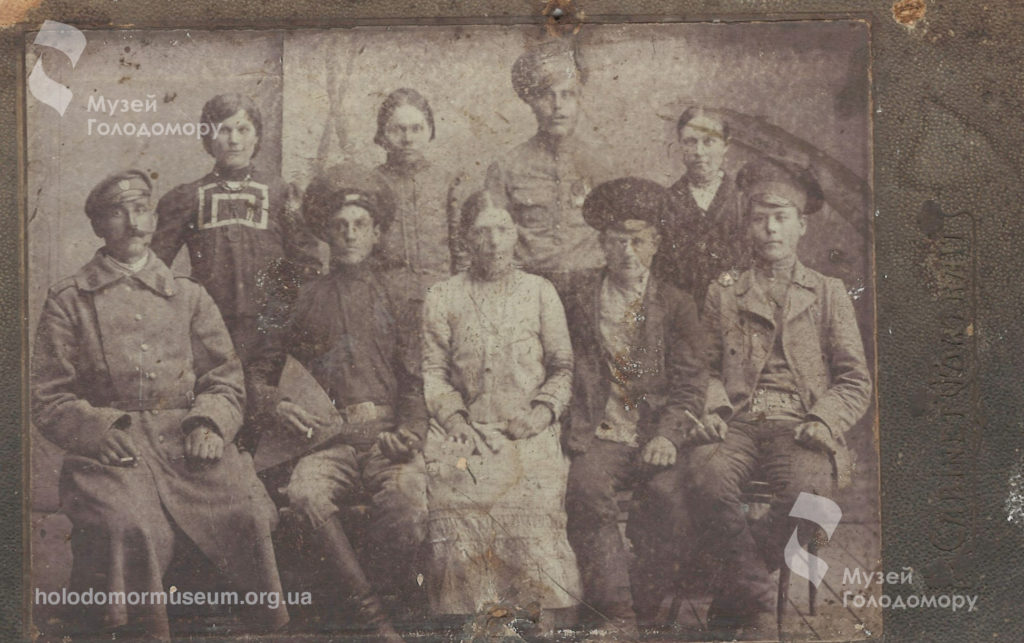 A group photo of students of the Theatre and Decorative Arts Faculty of the Odessa Art Institute with Professor V.M. Muller. Among the students, there is Mykola Fedorovych Slipchenko (artist). The inscription on the back: "In the theatrical and decorative workshop of prof. Muller V. M. 1927–1928. Odessa. M. S. On the 1st year of the Odessa Art Institute (signature) M. Slipchenko - 1927–28. [translation from Russian]. In 2021, the photo was transferred to permanent storage by V. V. Slipchenko. Mykola Fedorovych Slipchenko - artist, graphic artist, and member of the Union of Artists of Ukraine - was born on December 4, 1909, in Odesa. From 1927–1931, he studied at the Odessa Art Institute. He entered great art as a poster artist. At the beginning of the 1990s, he created two paintings dedicated to the Holodomor, which the artist's family donated to the National Museum of the Holodomor-Genocide in 2021. 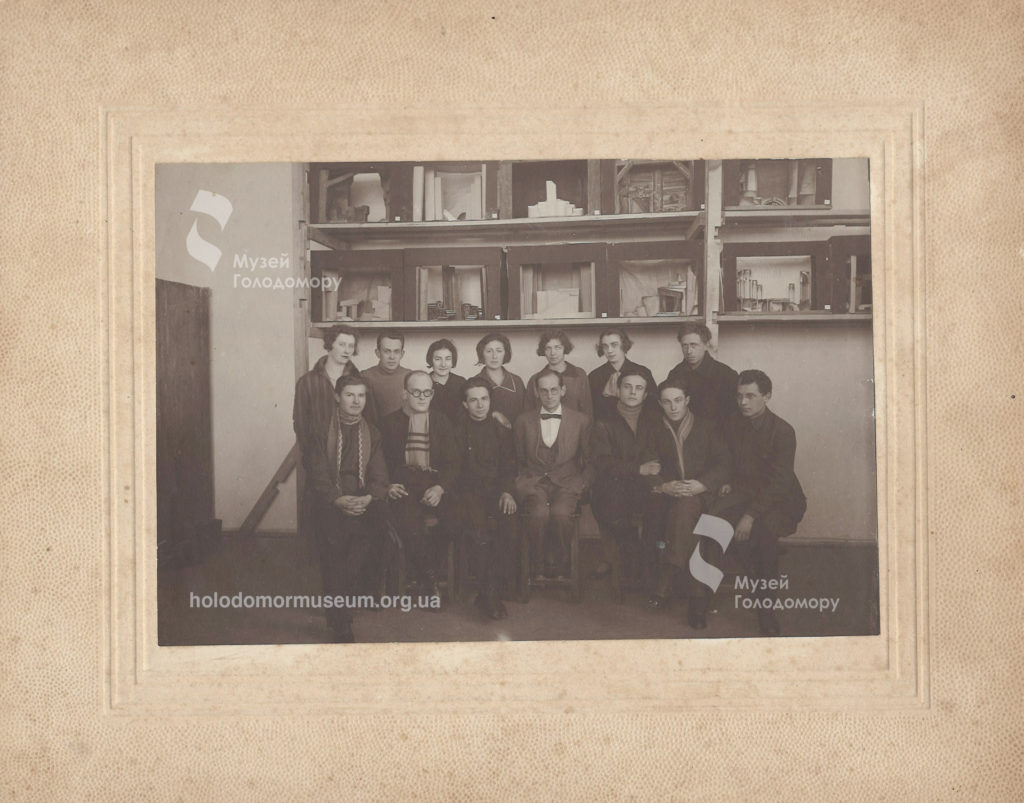