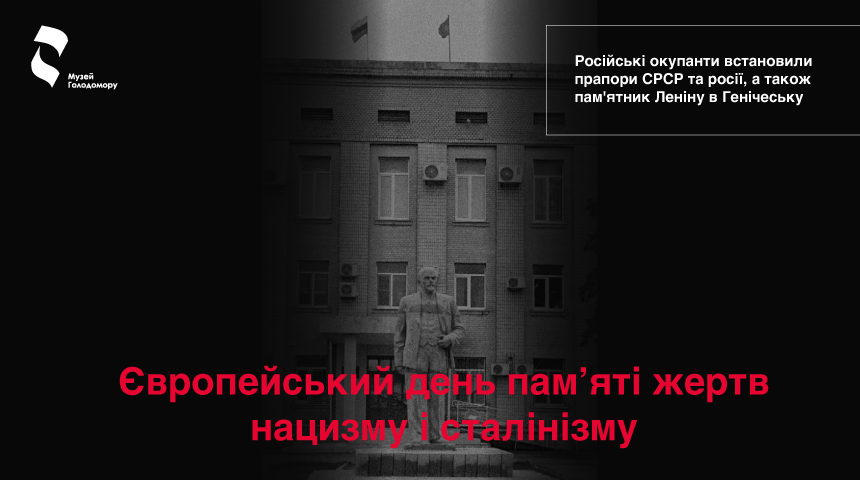 All-European Day of Remembrance for the Victims of Stalinism and Nazism: Appeal of the Holodomor Museum to the European Community

On July 3, 2009, the OSCE Parliamentary Assembly adopted a resolution naming August 23 as the All-European Day of Remembrance for the Victims of Stalinism and Nazism. In this document, the OSCE called for a “common position against all forms of totalitarian power, regardless of ideological basis” and condemned the “heroization of totalitarian regimes.”

Since then, Russia, as a member of the OSCE, has classified the archives of the Soviet period, whitewashed the figure of Stalin, and distorted the history of the 20th century to suit its political plans. All these years in the Russian Federation, the Red Army was heroized, exaggerating its role in the Second World War and concealing its crimes. Russian state propaganda cultivated the war under the slogans “we can repeat it.” The idea of ​​its chosenness, messianism, was imposed on the Russian society- they say the Russians are the only ones on the European continent who defeated Nazism and can do it again. Now the Kremlin has chosen Ukrainians to play the role of Nazis, whom the Russian army came to Ukraine to destroy on February 24, 2022. In fact, the Russians are killing Ukrainians, forcibly deporting them to Russia, robbing and Russifying them.

Why did this happen?

Why are Soviet symbols still not banned in Europe?

Why did only 9 European countries recognize the Holodomor as genocide?

On this memorable day, the Holodomor Museum calls on the European community to finally ban Soviet symbols and heroization of the USSR and its leaders – Lenin and Stalin.