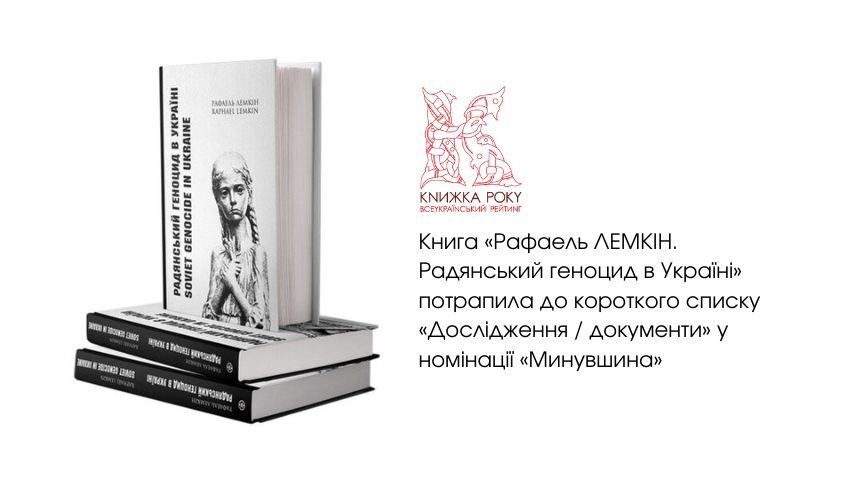 Ukrainian rating “Book of the Year 2020” announced short lists in 7 nominations. This was reported by the press service of the competition.

The book of the Holodomor Museum “Raphael Lemkin. Soviet Genocide in Ukraine” was shortlisted for “Research / Documents” nomination in the category “Past”.

The award ceremony will take place in early February.

Publication “Raphael Lemkin. Soviet Genocide in Ukraine” is an extended publication of Raphael Lemkin’s famous report on the genocide of the Ukrainian nation committed by the communist regime. The publication has been translated into 6 official UN languages ​​and 27 other languages. The compiler is Olesia Stasiuk, Director General of the National Museum of the Holodomor Genocide, and the publisher is Marko Melnyk.

The book opens with an introductory speech from the National Museum of the Holodomor Genocide and the Holodomor Research Institute. The article is accompanied by the text of the Convention on the Prevention and Punishment of the Crime of Genocide, the historic introduction by Dr Roman Serbyn and a photo of Professor Raphael Lemkin in the Society of Key UN Diplomats, who actively supported the draft Convention on Genocide.

It will be recalled that the “Book of the Year” rating was founded in 1999 and annually determines the best Ukrainian books of the current year, published by Ukrainian publishers independently or in cooperation with foreign partners. The rating is designed to highlight and embellish the achievements of Ukrainian publishers; to create the resonance and correct comparison of these achievements with foreign analogues (this is extremely important in the conditions of domination of the Ukrainian market of products such as Russian publishing houses); to create the latest landmarks of national pride.