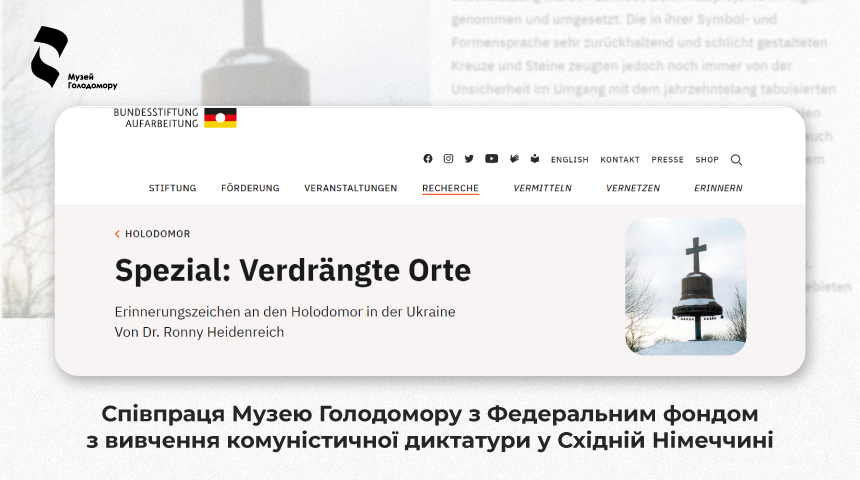 The Federal Foundation for the Study of the Communist Dictatorship in East Germany, one of the main tasks of which is to preserve the memory of the crimes of the communist dictatorships, thanked the Holodomor Museum for its cooperation and assistance in creating informational materials about the Holodomor.

In particular, the Foundation posted information about monuments to the Holodomor witness on its website, where photos, provided by our Museum, were used. “Here we have collected a selection of Holodomor memorial sites. I would like to especially thank the Holodomor Museum in Kyiv for their cooperation in the photo research,” says the website of the Federal Foundation.

Also, in Dr Ronny Heidenreich’s article Erinnerungszeichen an den Holodomor in der Ukraine, which the Foundation prepared for Holodomor Memorial Day, photos, provided by the Holodomor Museum, were used.

“The great famine in Ukraine in 1932/33, known as the Holodomor, is one of the greatest crimes of the 20th century. For two years, millions of people were deliberately and deliberately starved. Only after the collapse of the Soviet Union was it possible to investigate and publicly discuss this crime,” says the website of the Federal Foundation. In its materials, the Foundation presented 342 places in Ukraine that are reminiscent of the Holodomor. Such a large number of memorials, presented in almost all corners of the country, according to the foundation’s experts, gives an idea of the scale of the disaster.

Information about the Holodomor in Ukraine in 1932-1933 is presented on the website of the Federal Foundation for the Study of the Communist Dictatorship in East Germany in a separate section, as one of the largest crimes of the communist regime.