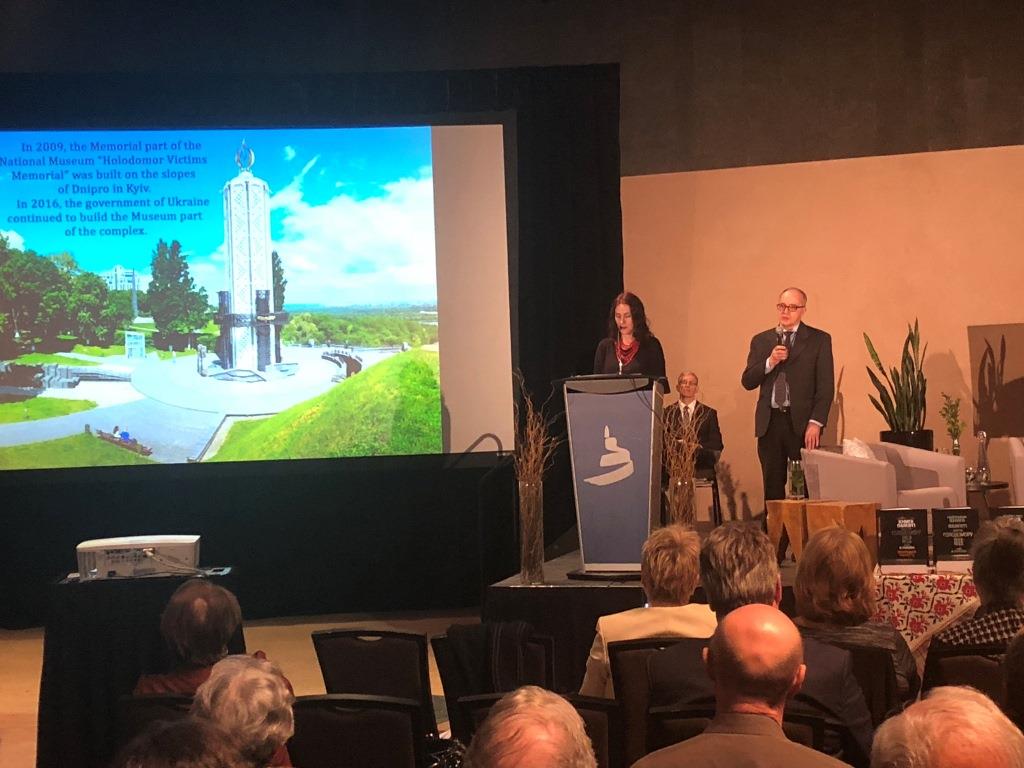 The third year in a row in Canada is the action “April – the month of memory of victims of genocide, condemnation and prevention”. During the month, educational and cultural events are taking place in the cities of Canada on the issue to inform young people about genocide and its prevention. Traditionally, the communities of Canada tell in various ways about the history of the genocide that their people experienced.

This year, the National Museum “Holodomor Victims Memorial” joined the action. On April 22-25, in Winnipeg, Director General of the Memorial Olesia Stasiuk met with the President of the Canadian Museum for Human Rights (CMHR) Dr. John Young, the Ukrainian community and the representatives of the Mennonites who emigrated from Ukraine in the last century.

Olesia Stasiuk told about the activities of the Holodomor Victims Memorial in the educational direction. The Heads of museums have discussed further plans for cooperation. Within the framework of the meeting, a joint review of the film ” Covering the Holodomor: Memory Eternal”, which was created by museums in 2016, was held.

At a meeting with the Ukrainian community of Winnipeg, the Director General presented the museum’s activities and described the plans and objectives of the museum. Representatives of the Diaspora expressed their desire to convey memorial objects and documents to the Holodomor Victims Memorial. Within the framework of the meeting with the representative of the Cultural center of Ukrainians in Winnipeg, “Oseredok” – Sofia Kachor, the parties agreed to transfer evidence of Holodomor eyewitnesses to the museum’s funds.

Also, the Director General met with the Mennonites community who emigrated from Ukraine. Representatives of this Protestant  Current  were interested in the possibilities of researching the history of the Mennonite communities of the Ukrainian SSR during the Holodomor.

During the events, Olesia Stasiuk spoke with the students of the Winnipeg School Division  about Holodomor.

On April 26, 2018, Olesia Stasiuk along with the President of the Canadian Museum for Human Rights‘ Dr. John Young and Vice President of CMHR Clint Kjorl met with the Ukrainian community in Saskatoon, Saskatchewan. The Director General of the Holodomor Victims Memorial familiarized the community with the activities and plans of the museum. Within the framework of the visit, Olesia Stasiuk visited the Ukrainian Museum of Canada, whose staff discussed the prospects of museum cooperation and the transfer of valuable materials related to the Holodomor in Ukraine to the Holodomor Victims Memorial.

The following events of action “April – the month of memory of victims of genocide, condemnation and prevention” occurred on April 27-28 in Edmonton, Alberta. Meetings were held at the University of Alberta, where the Canadian Institute of Ukrainian Studies operates. Olesia Stasiuk had a conversation with CIUS representatives about the future cooperation in researching and studying the history of the Holodomor.

The action program “April – the month of memory of victims of genocide, condemnation and prevention”  also provides for events in early May in Toronto, Ottawa and Montreal.