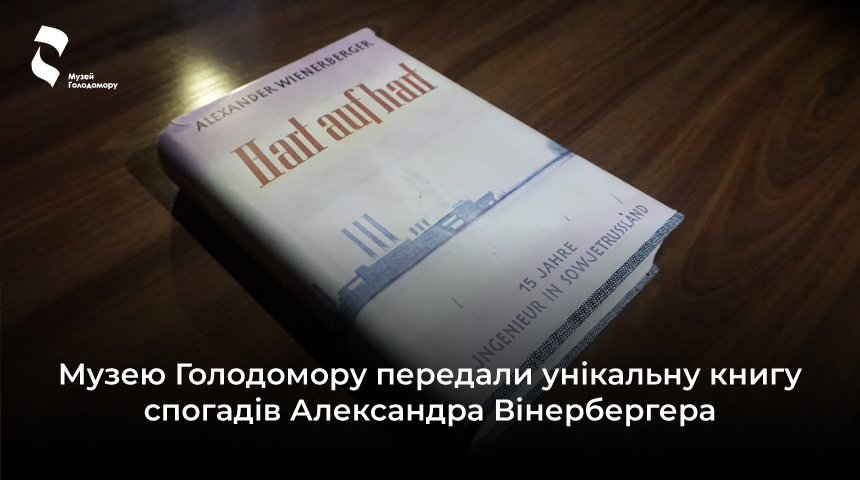 “Fateful times”: a unique book of Alexander Wienerberger’s memories was handed over to the Holodomor Museum

The Holodomor Museum received a book of Alexander Wienerberger’s memories, Hart auf hart, as a gift. 15 Jahre Ingenieur in Sowjetrussland (“Fateful times. 15 years of an engineer in Soviet Russia”). This unique publication was purchased in Germany by a philanthropist, Andriy Valeriyovych Kravchenko.

Hart auf hart is Austrian engineer Alexander Wienerberger’s memoir about his life in the Soviet Union from 1917 to 1933. Three chapters are devoted to his stay in Ukraine, where in 1932-1933, he was assigned to modernize a factory producing plastics. It was then that he took his famous photos – photographic evidence of the Holodomor.

In 1939, after returning to Austria, he published a book of memories about his life in the USSR. He described the inhumane methods and means by which the country of “workers and peasants” was built. At the same time, he tried to debunk the lies surrounding the “construction of socialism.” He illustrated what was described with his photos, secretly taken to Austria. In total, the memoir contains more than 200 pages of text and photographs.

It is worth noting that the copy of the book, which the Holodomor Museum now has in its collections, has been perfectly preserved, although it was published in 1939. The edition was printed on good-quality paper, and the photos printing is simply impressive.

We are sincerely grateful for such a gift because there are not many copies of this book left in the world.