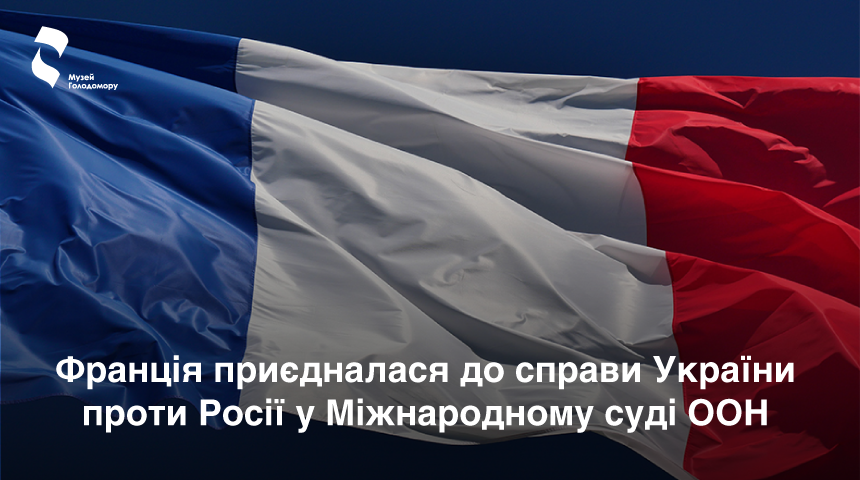 on the facts of the genocide of the Ukrainian people

in the UN International Court of Justice

The UN International Court of Justice (hereafter – the UN IC) in The Hague declared that on September 14, the French Republic, in accordance with Art. 63 of the Charter of the UN IC filed an application to intervene in consideration of the case “Ukraine v. Russian Federation”, according to which Russia is accused of committing genocide against the Ukrainian people during a full-scale invasion of Ukraine.

For quite a long time, French President Emmanuel Macron hesitated to call the actions of the Russian Federation in Ukraine genocide. Therefore, this statement is a victory for Ukrainian diplomacy in the matter of conveying the truth about the events currently taking place in Ukraine.

In its statement of intervention, France emphasized that, as a party to the Convention on the Prevention and Punishment of the Crime of Genocide, it “considers it necessary to exercise the right to intervene in this case, especially because of the special nature of the Convention… in which “the contracting states have no own interests and have only a common interest for everyone, namely the achievement of those high goals, which are the meaning of the existence of the convention”[1].

France’s participation in the case may be challenged by the Russian Federation in accordance with Art. 83 of the Rules of Court. For this, written comments must be submitted. The UN Security Council reminded of this.

We will remind you that on February 26, 2022, Ukraine filed a lawsuit with the UN International Court of Justice regarding Russia’s violation of the Convention on the Prevention and Punishment of the Crime of Genocide.

The lawsuit, in particular, refutes the Russian slander against Ukraine about the genocide in Donbas. At the same time, it is clearly stated that the unsubstantiated information about the genocide provided by the officials of the Russian Federation was a justification for the recognition of the independence of the “republics” of Donbas and the start of open military aggression against Ukraine. For its part, Ukraine listed the crimes committed by the Russian Federation in chronological order from 2014. Official Kyiv called for consideration of the actions of the Russian military and the rhetoric of Russian President V. Putin, who “denied the existence of the Ukrainian people” as signs of genocide against the Ukrainian nation[2].

On the same day, official Kyiv submitted a petition for preventive measures, the main message of which was a request to the UN Security Council to oblige Russia to stop military actions in Ukraine. Volodymyr Zelensky, in a conversation with UN Secretary General António Guterres, officially called to qualify the actions and statements of the Russian Federation as genocide of the Ukrainian people[3].

For the upcoming court session in Ukraine, the collection of evidence of the commission of war crimes by Russian servicemen and Russian officials has begun. The UN Independent International Commission to investigate the Actions of the Russian Federation against Ukraine was also established to record violations of human rights, international humanitarian law and other crimes related to Russian aggression. The main task is to identify suspects, collect evidence and prepare materials so that the guilty are punished.

In response to Ukraine’s lawsuit, the UN Security Council on March 16 obliged the Russian Federation to stop its invasion of Ukraine immediately. In Moscow, they refused to comply with the court’s decision, proving their attitude to international law as a mechanism of manipulation in their interests.

After liberating the Kyiv Region from the Russian occupiers, the bodies of civilians tortured and brutally killed by the enemy were discovered there. On April 3, 2022, the article “What Russia should do with Ukraine” was published in Russia, which explained the murders and atrocities committed against civilians. This article is one of the proof of the deliberate genocide of Ukrainians.

The open determination of the Russian leadership to continue the chosen course and the exponential increase in the amount of evidence about the crimes of the Russian army in the north Kyiv region and Mariupol became a litmus test for understanding the futility of negotiations at the end of hostilities. On April 14, the Verkhovna Rada of Ukraine adopted a statement “On the Russian Federation committing genocide in Ukraine.” 363 People’s Deputies voted for the relevant Resolution No. 7276.

In the spring, the leaders of many countries expressed their position regarding the support of official Kyiv in defining Russian actions as genocide. Among them: US President and former President Joseph Biden and Donald Trump, Polish President Andrzej Duda and Polish Prime Minister Mateusz Morawiecki, Canadian Prime Minister Justin Trudeau, Estonian Prime Minister Kaja Kallas and others. At the end of May, more than 40 countries and the EU announced their support for Ukraine v. Russia case.

On July 1, Ukraine submitted a Memorandum to the UN Security Council. It states that the Russian Federation has violated the Genocide Convention by justifying its military aggression with groundless accusations of Ukraine of “genocide”. Minister of Foreign Affairs Dmytro Kuleba emphasized that “this is an important step for holding the Russian Federation accountable and compensating for the damage”[4]

On July 13, 42 countries and the EU announced their intention to join the case “Ukraine v. Russian Federation” regarding the application of the Genocide Convention. Lithuania, Latvia, New Zealand and Great Britain immediately submitted their memoranda of accession. Later, Estonia, Canada, Poland, the Czech Republic and Ireland joined.

On July 21, a group of American senators presented in the Upper House a draft resolution recognizing the actions of the Russian Federation in Ukraine as an act of genocide against the Ukrainian people.

All international partners of Ukraine support the struggle of the Ukrainian people for their freedom. In addition to financial and military assistance, they contribute to the accumulation and transfer of information as a part of the case “Ukraine v. Russia” to the UN IC.

The longer the Russian-Ukrainian war continues, the more convincing the evidence of the genocidal intentions and actions of the Russian Federation in Ukraine becomes for the whole world. The victims of the rashist regime in Moscow and their zombified followers will not be forgotten.