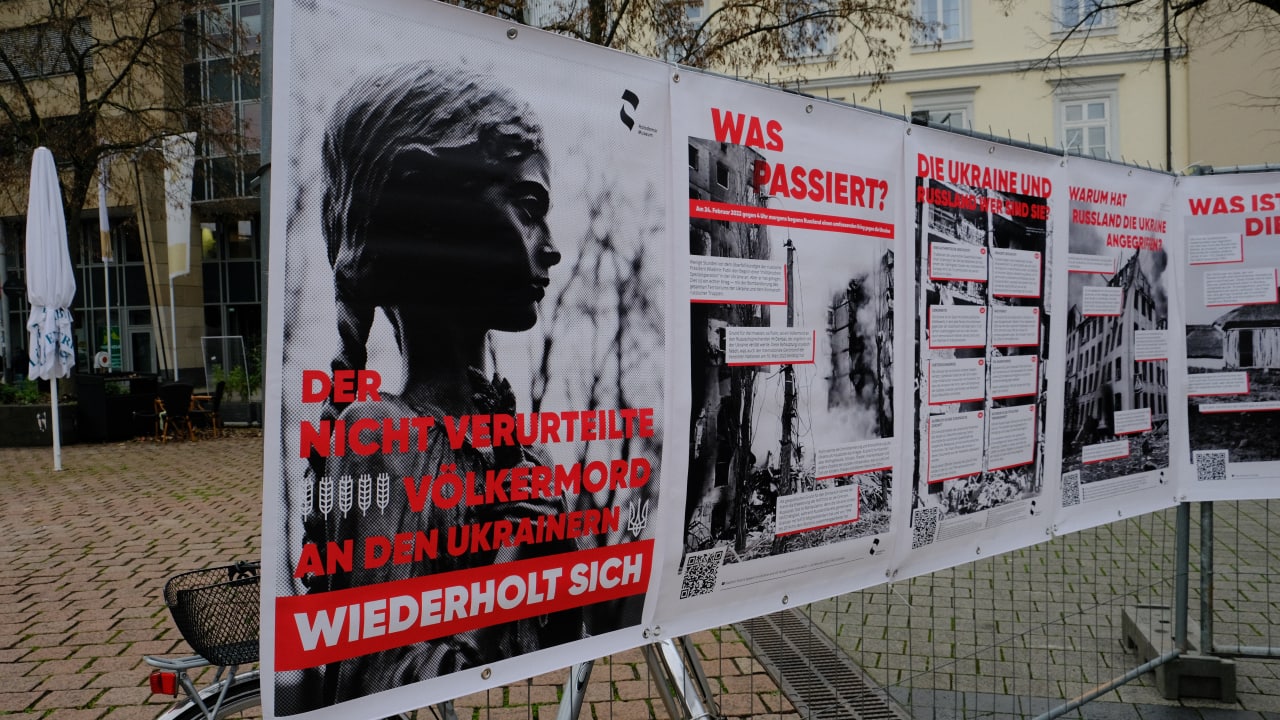 Commemorating the 90th anniversary of the Holodomor genocide and the memory of its victims, commemorative and educational events were held in various countries of the world dedicated to the tragedy of the Ukrainian people committed by the Stalinist regime. Today, when a new bloody war continues on the territory of our country, Ukraine is a special focus of the world community. Even more interesting in the world today is Ukrainian history, which provides answers to many questions of today, and explains the duration of the events of the Holodomor and the current Russian-Ukrainian war. During 2022 and previous years, the Holodomor Museum has prepared a number of exhibition projects that tell about our tragic past and draw parallels to the present. These exhibitions were exhibited in different countries of the world.

Thus, the exhibition “Uncondemned Genocide of Ukrainians Repeats” was opened in the Parliament of Romania, Dublin (Ireland), Vilnius (Lithuania), Luxembourg (Germany), Ankara (Turkey), Houston (USA), Tirana (Albania). The exhibition highlights the causes and consequences of the crime of the Soviet regime – the Holodomor-genocide of the Ukrainian people in 1932-1933, the repression of the Ukrainian intelligentsia and the attempt to exterminate Ukrainian culture. 90 years ago, Ukraine experienced one of the most tragic pages in its history – the Holodomor. At that time, Russia tried to destroy Ukrainianness itself, our way of life and the meaning of existence of an entire nation. However, the criminal regime was not punished, which turned it into a breeding ground for a new wave of Russian genocide against Ukrainians in 2022.

In Warsaw (Poland), the exhibition “Holodomor and Repeated Genocide” was open throughout November on the territory of the palace-park complex “Royal Lazienki” (Łazienki Królewskie). The exposition on the history of the Holodomor of 1932-1933 and the genocidal policy of Moscow in the modern war against Ukraine was the result of the collaboration of the Holodomor Museum and Polish partners: the Museum of the History of Poland, the Museum “Korolivski Lazyenki” and the Polish Institute in Kyiv.

Another exhibition of our Museum “Holodomor: Destruction of Identity,” was opened in Vilnius (Lithuania). The exhibition was created in 2020. Its focus is the destruction by the communist regime of Ukrainian farmers as bearers of traditions, customs, language and culture. After all, the goal of the Holodomor was not simply the killing of a certain number of Ukrainians, but the erasure of Ukrainian identity on the scale of the entire nation.

In Seoul (South Korea), the exhibition “Lace of Memory”, created by the artist Daria Alyoshkina with the participation of the Holodomor Museum, opened in 2019. In the centre of the exhibition are huge carvings, which tell about the life and culture of Ukrainians before the Holodomor, and as a counterweight to them – separate plots of the history of the genocide, created on the basis of the memories of the Holodomor witnesses.

Also, the Embassy of Ukraine in Estonia and the Congress of Ukrainians in Estonia presented a book of translations of Raphael Lemkin’s article “Soviet Genocide in Ukraine”, which contains translations in 33 languages of the world, on the premises of the Tallinn Central Library. The book was published by the Museum in 1921.

Today, the goal of Russia’s genocidal war of aggression does not differ from the one of the genocide of 1932-1933 – the destruction of the Ukrainian nation and its statehood. And the current terror of the Russian Federation became possible because Moscow did not recognize its crimes after the collapse of the USSR. Unpunished evil returns. The world should know about it!