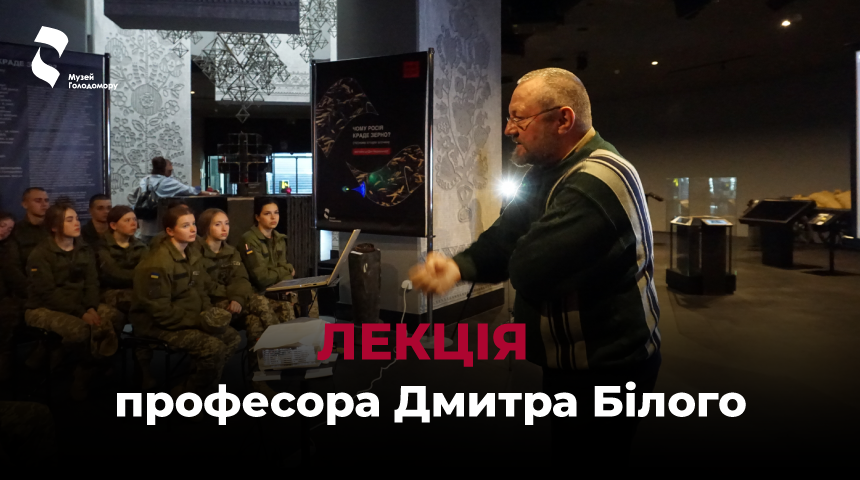 In the Holodomor Museum, as part of the information and exhibition project, “WHY DOES RUSSIA STEAL GRAIN? A (non) new history of crime.” was a lecture by Dmytro Bilyi, doctor of historical sciences, professor, and scientist of the Holodomor Research Institute.

The historian emphasized that the most valuable resource in the world is the land that gives food. And Ukraine, as the owner of the most fertile chernozems, has always been a delicacy for invaders. “The best Ukrainian chernozems in the world are both Ukraine’s eternal blessing and its eternal curse,” noted Dmytro Doroshenko, a Ukrainian politician and historian, at the beginning of the last century. It was the Ukrainians on their fertile land who had to experience the greatest famine in history.

“Terror with hunger is what the Bolsheviks and Russians have used against Ukraine for the past hundred years,” Dmytro Bilyi emphasized. He told the audience about the causes and consequences of the man-made famine of 1921–1923, the Holodomor of 1932–1933, and the famine of 1946–1947. “And now, in the conditions of the current war, the enemies use bread as one of the means of murder,” the scientist added, stressing that Russia is already threatening famine not only Ukraine, but the whole world. However, Moscow can no longer hide its crimes and their consequences as it did in the past. The whole world today knows the truth and is doing everything possible to stop the terrorist country.

Let us remind you that the following lectures by Dmytro Bily will be on October 13 and 20. We invite everyone!