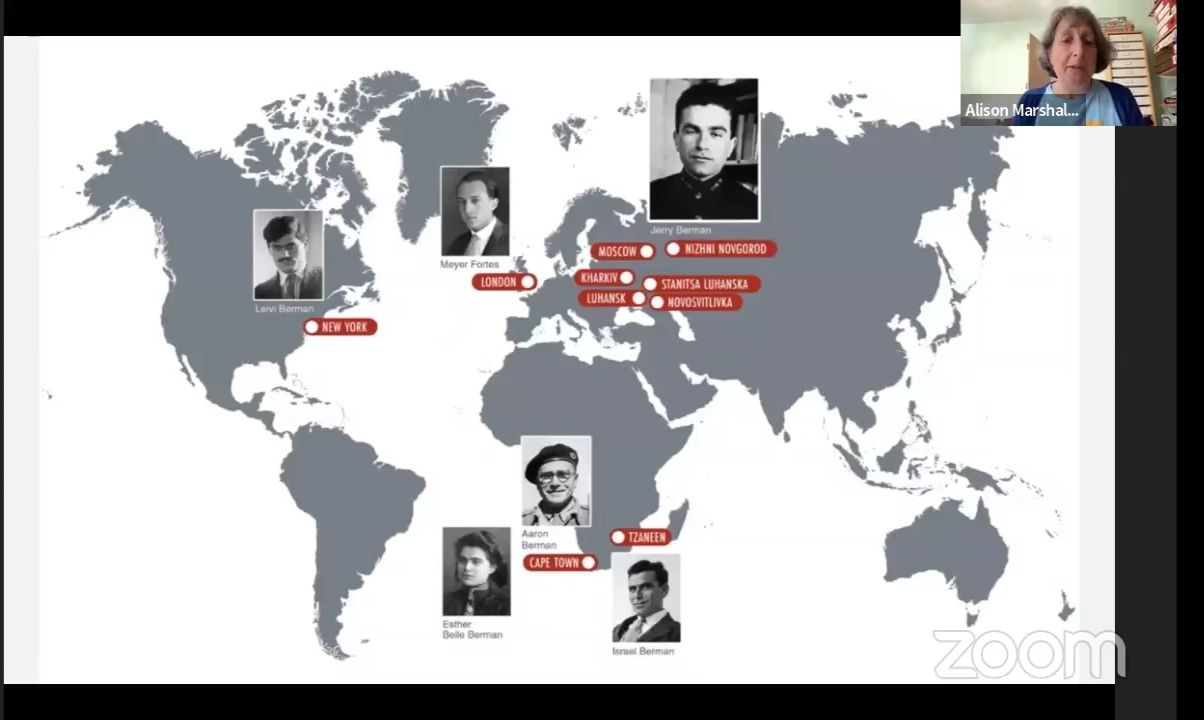 Letters from the Attic: Presenting the Digital Archive of Jerry Berman’s Letters

On Tuesday, July 5, the Holodomor Museum hosted an online presentation of the digital archive of the letters of Jerry Berman, an engineer from South Africa who became an involuntary witness to the Holodomor of 1932-1933 in Ukraine.

The following took part in the presentation:

Yana Hrynko – head of the exposition and exhibition department of the National Museum of the Holodomor-Genocide;

Alison Marshall is the granddaughter of Meyer Fortes, with whom Jerry Berman corresponded;

Roman Moldavskyi – candidate of historical sciences, methodologist of the exposition and exhibition department of the National Museum of the Holodomor-Genocide, who researches Berman’s correspondence;

Sara Nesteruk is a British artist, animator, author of the “Recipes for Baking Bread” project, and lecturer at the University of Huddersfield;

Tetiana Nahirnych is a translator of the National Museum of Holodomor-Genocide.

“This story began last year, when 67 letters of an engineer from South Africa, Jerry Berman, who wrote from Ukraine, namely Stanytsia Luhanska, to his family and friends in 1932-1933, were transferred to the museum funds,” Yana Hrynko said. – We exhibited some of these letters in the Hall of Memory. Later, they will be presented in the future exposition of the Holodomor Museum. In the meantime, we decided to give everyone who wants to read these letters an opportunity and published them on the Museum’s website.”

Alison Marshall, who in 2016 found these letters addressed to her grandfather Mayer Fortes, admitted that she did not immediately understand their value. After all, she did not know anything about the Holodomor and did not understand the context. “I showed the letters to different people, but no one could explain what they were about,” Ms. Marshall said.- I learned more and more about Jerry Berman, found his son Peter, who helped establish some facts of his father’s biography, and also learned more about the historical period that Gerry described. I learned from the letters that he was born into a Jewish family in Lithuania, which was part of the Russian Empire at that time. Life was difficult, so the family had to emigrate to South Africa. Jerry was then 17 years old. While studying at the University of Cape Town, Jerry met my grandfather Mayer Foster, to whom he later wrote his letters.”

Ms. Alison’s acquaintance with the artist Sara Nesteruk finally helped to understand the value of this correspondence. She advised sending the letters to Ukraine to the Holodomor Museum. The artist, inspired by this story, created an animated film about Jerry Berman’s correspondence which became part of her “Recipes for Baking Bread” project.

Historian Roman Moldavskyi emphasized that the uniqueness of these letters is that they are a vivid description of the everyday life of ordinary people during the Holodomor period, which is something you will not find in official documents. He also explained what brought Jerry Berman to the USSR.

The 20s and 30s of the last century are the periods of so-called industrialization. Given the catastrophic shortage of specialists in various specialities, the USSR looked for them all over the world. In 1932, Jerry was already 29 years old, but he had not found himself as a professional yet. Therefore, the offer to go to the Soviet Union “to build socialism” seemed interesting.

However, the reality turned out to be very far from expectations.

“Foreign hired workers were in a privileged position, this is confirmed by the documents of that time,” adds Roman Moldavskyi. – It concerned payment of labour, provision of housing, clothing, and household items. Jerry wrote in one of his letters that he felt like an aristocrat there – he was fed well, everyone gave way to him, he could order fashionable clothes, and he had access to a separate dining room and a flat. The stay of the foreign workers was quite comfortable, especially compared to the local workers. In the photo, you can see the barracks in which the locals lived and the cottages that were built for foreign workers.”

According to Moldavskyi, Jerry arrived in Ukraine in the autumn of 1932, just as the Holodomor began. And stayed until the time “when this wave of deaths began to recede.”

“He records in his letters how these epoch-making constructions took place, which the Soviet Union presented as the victory of the socialist system,” says Mr. Moldavskyi. – In his letters, he describes all the horrors that he had to see with his own eyes. There are several telling letters in which Berman describes various situations of his workers rummaging through rubbish cans in the cafeteria to feed on potato waste. He says that as an engineer, he has to “knock out” product cards from management. He also emphasizes that his personal situation is much better. And his managers, receiving a slightly higher salary than him, cannot feed themselves.”

The historian also emphasizes that the value of Berman’s letters also lies in the fact that abroad the Holodomor is mostly perceived as the story of the farmers. “Jerry’s letters tell us that the workers with whom he was building the bridge were also starving and had limited access to food, just like the farmers from the surrounding villages,” he says. – The farmers have a plot of land where they can grow something. If the workers are not given a bread card, they will die.”

The foreign engineer is surprised that half-starved workers have to carry out a five-year plan. Berman notes in his letters that only party fans believe it is possible to build something by a certain date without having a staffing schedule for workers, building materials and food.

“For example, in five years they are building a dam on the Dnipro and a huge 1,500-meter bridge near Katerynoslav. They built them in record time. There is no doubt about it! But what about the means! … It cost twice as much in human sacrifice and money as it would have been in America for similar works,” Berman writes in one of his letters.

Jerry Berman’s letters destroy Soviet myths and are evidence of the terrible cost of industrialization in the USSR.

You can find the correspondence on the website in the Holodomor/Archive/ Jerry Berman’s Letters section.

By clicking on any of them, you will open a scanned copy and also receive its English transcript and Ukrainian translation.

Video recording of the presentation