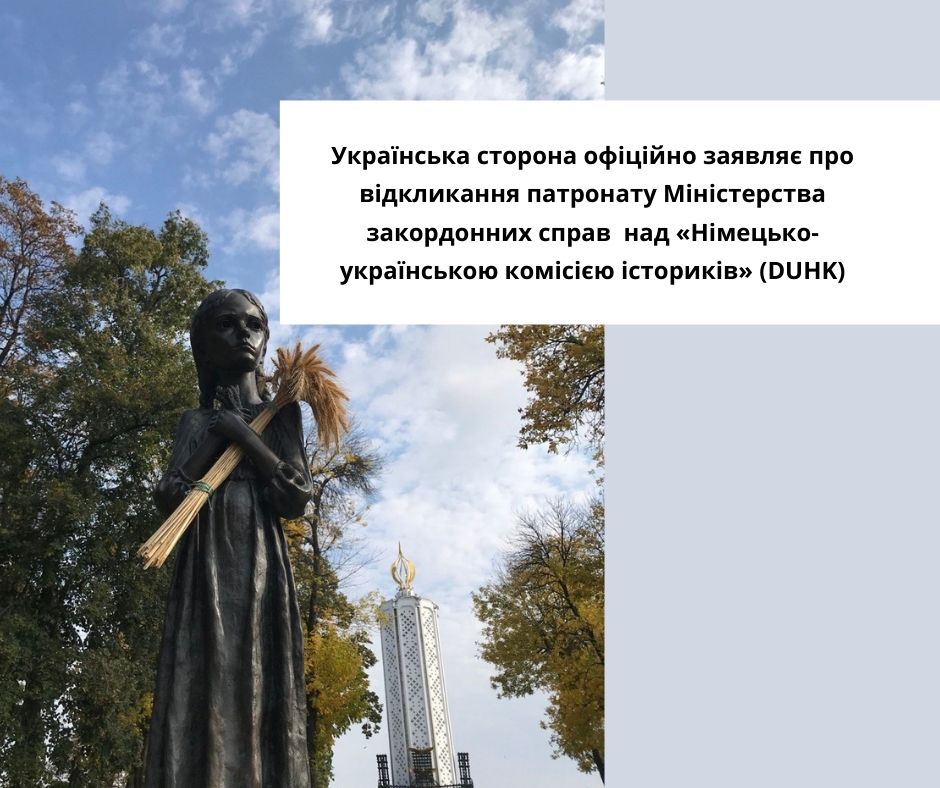 The Ukrainian side officially announces the withdrawal of the patronage of the Ministry of Foreign Affairs of the “German-Ukrainian Commission of Historians” (DUHK).

This was reported by the Embassy of Ukraine in Germany. They stressed that the Ukrainian side does not and did not consider the mentioned institution (DUHK) as a full-fledged bilateral intergovernmental commission on general history, as is the case of relations between Germany and the Eastern European states.

The Ukrainian side also initiated creating of a full-fledged Intergovernmental Ukrainian-German Commission on Historical Issues on an exceptionallly parity basis for a systematic and objective study of the common pages of history.

From the point of view of official Kyiv, DUHK presents itself as a purely German association of historians, initiated by the Society of Historians of Germany (VHD) in September 2014 and organized as a committee of these society (VHD).

On February 27, 2015, a fisrt meeting of the “commission” took place in Munich. Selected Ukrainian historians, headed by Mr. Hrytsak, who have been representing themselves only since the first day till now, were invited to work by the German side. The activities of the “commission” are coordinated by the Ludwig Maximilian University (Munich), which actually is its secretariat. On the proposal of the former Federal Minister of Foreign Affairs F.-V.Steinmeier on March 29, 2016, the Foreign Ministers of Germany and Ukraine took this “commission” under their patronage.

This “commission” deliberately removed itself from the public discourse in Germany regarding the most resonant pages of common history. This was especially revealed during the discussion in May 2017 in the Bundestag on the fundamental issue of confirming Germany’s historical responsibility to Ukraine for the crimes of Nazism, which the “commission” ignored.

Another indicator of the “commission’s” position was the direct refusal to participate in discussions, based on people’s petition, on the recognition of the Holodomor of 1932–33 as the genocide of the Ukrainian people in spite of appeals of members of the German parliamentt o the “commission”. Only under the insane pressure of civil society the “commission” was finally forced to organize a single event on this topic, namely the webinar on September 24, 2020.

At the same time, for the five years of the “work” of the “commission”, no publication has been prepared or published on the common pages of history to tell the German community about them. As a result, the “commission” finally lost the remnants of the Ukrainian side’s trust. Moreover, during the last year , it seemed that in the current format the activity does not correspond to the national interests of Ukraine. This was the last straw for revoking the patronage of the Ministry of Foreign Affairs of Ukraine.

Source: Embassy of Ukraine in Germany