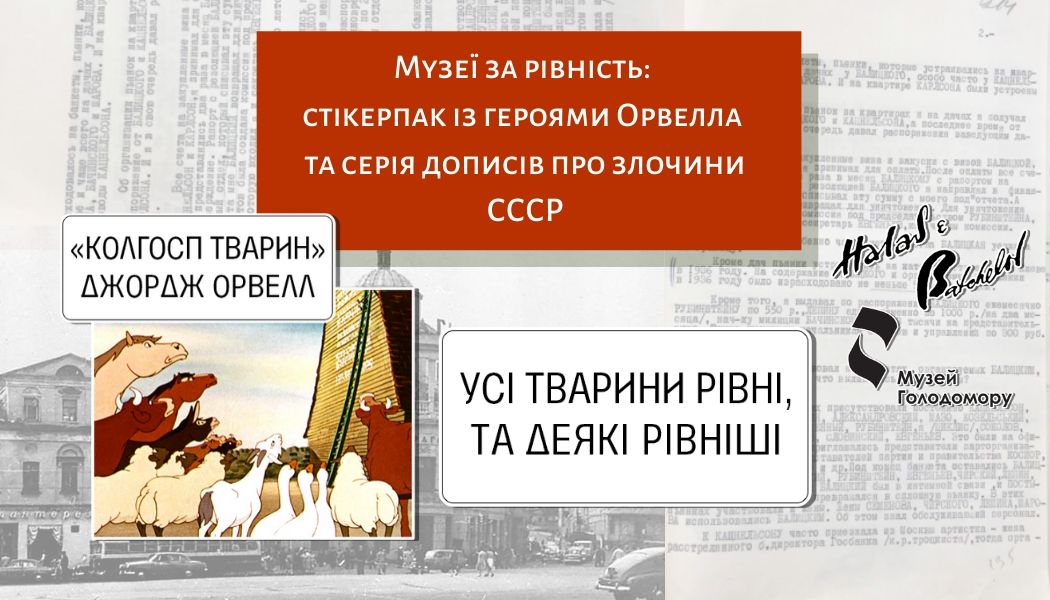 “More Equal Than Others: On the Crimes and Privileges in the USSR”

Every year, ICOM (International Council of Museums) chooses the main theme of Museum Day, which is celebrated on May 18. This year it is “Museums for Equality”. As the museum community notes, “International Museum Day 2020 aims at becoming a rallying point to both celebrate the diversity of perspectives that make up the communities and personnel of museums, and champion tools for identifying and overcoming bias in what they display and the stories they tell.”

To the International Museum Day, the Holodomor Museum team prepared a series of publications on the inequality and crimes of the totalitarian regime in the USSR, as well as created stickers for Telegram. Their main characters are the heroes of George Orwell’s “Animal Farm”, ​​a satirical work about the USSR with the legendary phrase “All animals are equal. but some animals are more equal than others.”

The project o”More Equal than Others: On Crimes and Privileges in the USSR” was created in order to draw the attention to the historical period, during which open society and equal rights were impossible. A series of posts with historical documents and facts will be published with #рівнішізаінших hashtag on Facebook, Instagram and Telegram, and stickers can be downloaded by the following link.

In collaboration with one of the most famous British cartoon company of the twentieth century, Halas&Batchelor, animated stickers with quotes from Orwell were created, which every Telegram user can download by the link.

Halas & Batchelor is a British company founded in 1940. It has been the largest and most influential animation studio in Western Europe for over 50 years. More than 2,000 films have been shot that have won international acclaim for their exquisite animation and explanation of complex ideas in a simple and humorous way.

Such format will draw the attention of adults and also ypng people, who use social media actively.

This project combines history of Ukrainian nation and contemporary tools for sharing it.