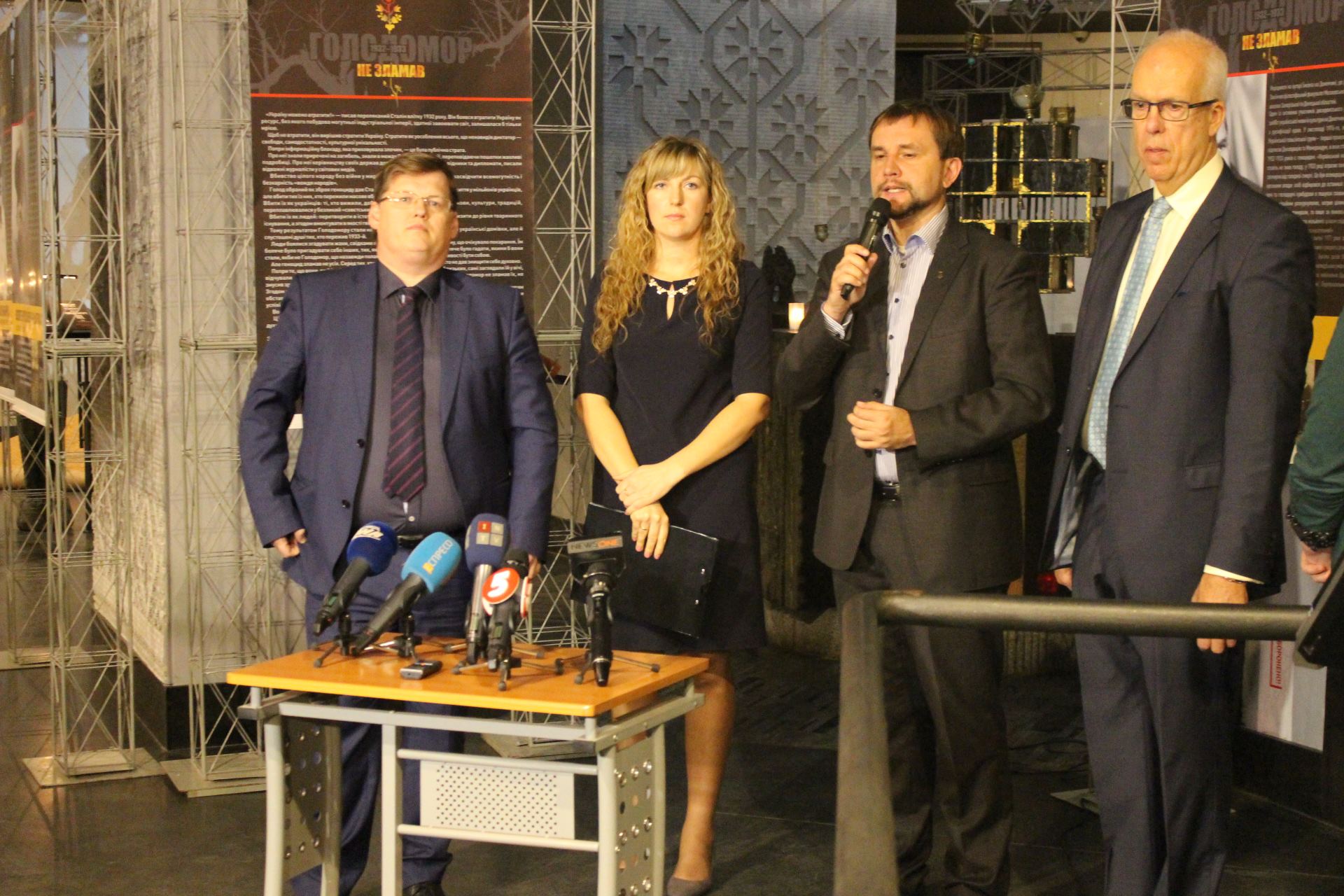 Presentation of the exhibition "Unbreakable"

On November 24, the National Museum Holodomor Victims’ Memorial hosted a presentation of the “Unbreakable” project that tells about 15 Ukrainians who survived in 1932-1933, being neither physically nor spiritually destroyed.

“The Holodomor is a part of the tragic history of Ukraine. Only after gaining independence in 1991, we gradually discovered these horrible pages when millions of Ukrainian citizens were murdered by a communist totalitarian regime. It was a clearly planned action aimed to destroy the Ukrainian spirit on our land. But we have survived this tragedy, and today our mission is not to forget the tragic events. Not to put a check mark on millions of people who died in this tragedy, but to draw conclusions and make Ukraine an economically and socially powerful and independent state in Europe. These fifteen stories are a very revealing evidence, which is a very revealing experience for these people. I thank the Institute of National Remembrance for the great work and preparation of events to commemorate the memory of the victims of the Holodomor and the preperations for the opening of this exhibition”, – said Vice Prime Minister of Ukraine Pavel Rozhenko in his speech.

“Every year, before the anniversaries of Holodomor tradegy, we come up with a new topic. Last year, the “People of Truth” was an important topic for us – those Ukrainians and representatives of other nations who were not afraid to write about the 1932-33 Holodomor, despite the fact that many of them cost imprisonment and even life. We chose as the topic of this year motto “The Holodomor Has Not Broken” – telling the stories of specific people who survived the Holodomor, who had to hide their relatives, suffered terrible losses, but at the same time the Holodomor did not break them, they remained human beings, Ukrainians,”- said the head of the Ukrainian Institute of National Memory Volodymyr Vyatrovich.

“They are different people – the famous Ukrainian artist Kateryna Bilokur, who survived the terrible disasters of the Holodomor of 1932-33, Eugenia Sakevich-Dallas, who became known as the American photography model, Eugenia Miroshnichenko, who became a famous opera singer, Ivan Svetlychny, who became a poet, dissident, Mykola Rudenko was one of the founders of the Ukrainian-Helsinki Group, and Levko Lukyanenko, who wrote the “Declaration of Independence of Ukraine”. All these people went through terrible times, but did not break, and it is thanks to them that we can say that, in spite of millions of dead, the Holodomor did not break Ukraine”, – emphasized Volodymyr Vyatrovich.

The presentation was also attended by the President of the European Platform for Memory and Conscience, PACE Vice President Goran Lindblad. He said: “It is extremely important for us now to remind people of the crimes of the totalitarian regime that have happened. Apparently, speaking of the great Ukrainian hunger, we are talking about one of the greatest crimes of a totalitarian system, comparable to famine committed by Mao Zedong during the Cultural Revolution. And we have to remember this. Without understanding these events and the historical processes that have occurred in history before, we will not be able to have a full understanding of what is happening now. “

The “Unbreakable” exhibition will be shown at the National Museum “Holodomor Victims’ Memorial” till the end of December 2016.