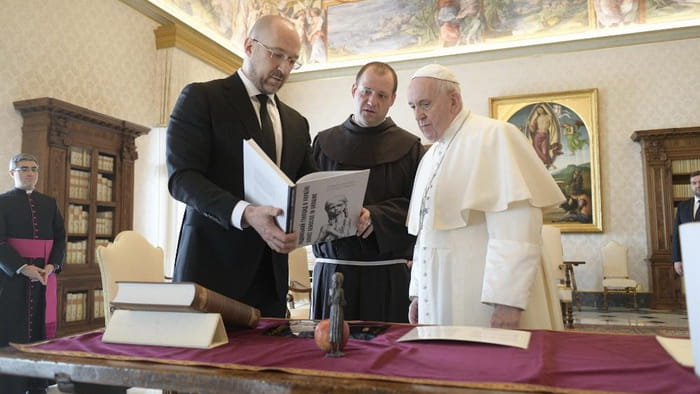 On March 25, 2021, Pope Francis met with Denys Shmygal, the Prime Minister of Ukraine, at an audience at the Apostolic Palace in the Vatican, Vatican NEWS reports.

The conversation of the Head of the Ukrainian Government with Pope Francis ended with the presentation of the delegation and the exchange of gifts. The Holy Father presented the Prime Minister of Ukraine with a bronze composition “Let’s Fill Hands with Other Hands” and special editions of his encyclicals and other documents.

Denys Shmygal presented the Pope with a facsimile edition of the Vienna Octoichus and a reproduction of the Bitter Memory of Childhood sculpture installed at the National Museum of the Holodomor Genocide in Kyiv, along with a book published by the Museum featuring Raphael Lemkin’s article “Soviet Genocide in Ukraine” translated into 33 languages.