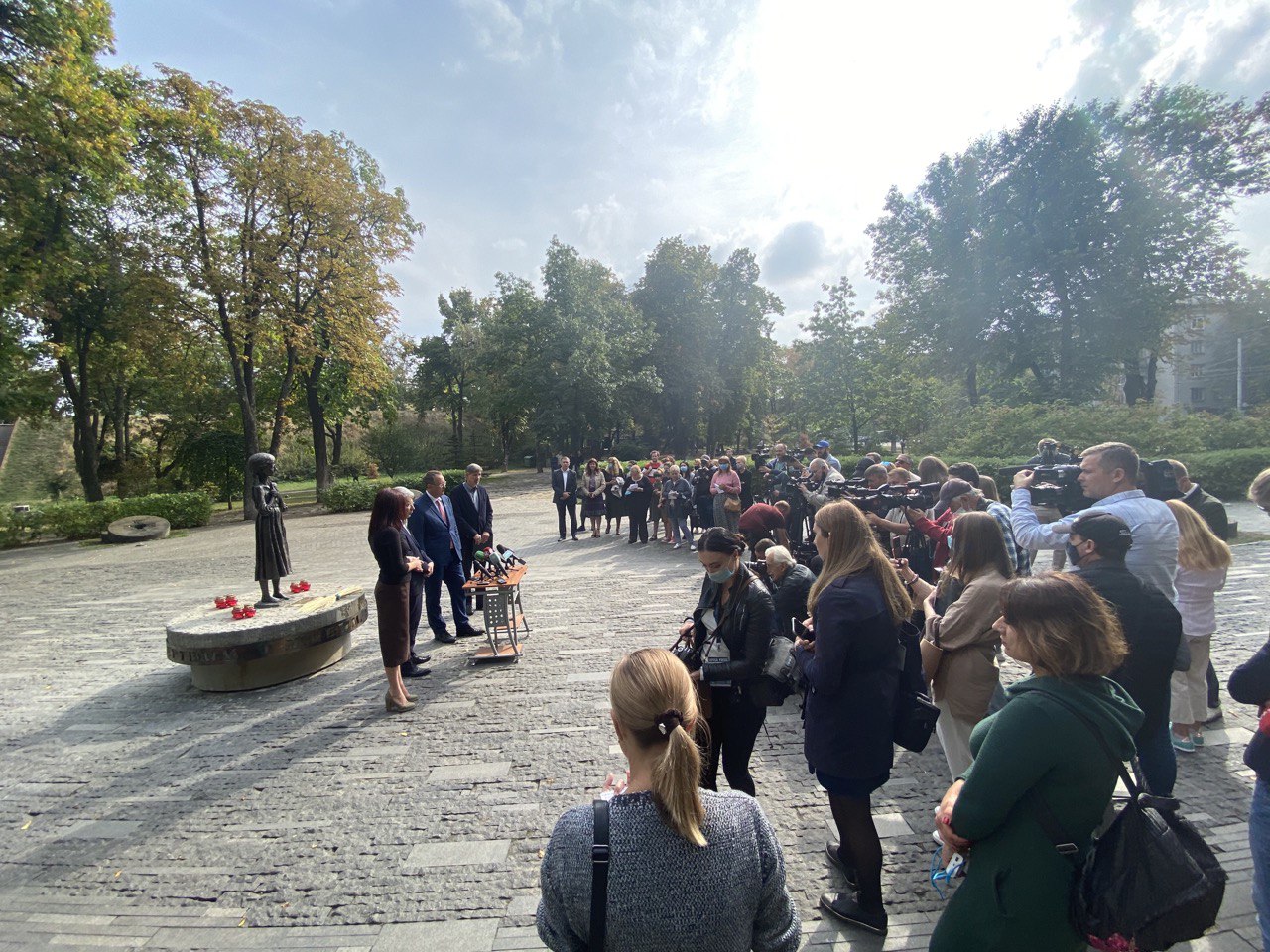 Restored and Intact: Statue of “Girl with Ears of Grain” Is Back

On September 29, 2020, one of the main symbols of the complex, the sculpture “Bitter Memory of Childhood”, was returned to the exposition of the National Museum of the Holodomor Genocide.

This sculpture symbolizes the memory of 3.5 million children killed by starvation during the genocide of the Ukrainian nation in 1932–1933, as well as of those who survived but did not have a childhood. The girl is holding five ears of grain, which remind of the Resolution of August 7, 1932, “On Safekeeping the Property of State Enterprises, Collective Farms and Cooperatives and Strengthening the Public (Socialist) Property”, mor commonly known as the “Law of Five Ears of Grain”.

The speakers of the presentation were Olesia Stasiuk, Director General of the National Museum of the Holodomor Genocide, Oleksandr Tkachenko, Minister of Culture and Information Policy of Ukraine, Anton Gerashchenko, Deputy Minister of Internal Affairs of Ukraine, and Serhii Kasianchuk, Director of the Ukrainian World Congress Office in Ukraine.

“This statue has become a symbol not only in Ukraine, but also in many countries around the world. Many famous people and institutions in Ukraine and abroad reacted to this act of vandalism. As long as we live, we must remember. It is a symbol of what happened in 1932-1933. Memory cannot be erased,” Oleksandr Tkachenko, Minister of Culture and Information Policy of Ukraine, said.

The President of Ukraine reacted to the act of vandalism by calling on the police to conduct the necessary investigation, define the crime and report on the progress of the investigation. Police have previously defined the damage to the monument near the Holodomor Museum as hooliganism.

“We continue to search for those desecrated the sculpture. I hope we find them. No one has the right to do such actions against the symbols of Ukrainian memory. Now, the territory of the museum is under constant video surveillance, the cameras are connected to the Safe City system, and the search for the vandals continues,” Anton Gerashchenko, Deputy Minister of Internal Affairs of Ukraine.

Immediately after the desecration of the monument, the Consulate General of Ukraine in San Francisco, 22nd Prime Minister of Canada Stephen Harper, Canadian politician James Besan, member of the House of Commons of Canada Yvan Baker, Ukrainian World Congress, Holodomor Awareness Committee in the United States, President American-Ukrainian Business Council Morgan Williams and others reacted to the incident.

Serhii Kasianchuk, Director of the Ukrainian World Congress Office in Ukraine, “It really hurts. The event shocked Ukrainians. The act of vandalism against the sculpture is symbolic. For decades, they tried to destroy and erase the memories of the genocide. Restoration of this monument indicates the steps to restore our memory. We feel this struggle all over the world. “

“This is not the first act of desacration of the symbol of remembrance of the horrific crime committed by the Communist regime against the Ukrainian nation. Several years ago, vandals spray-painted sculptures of angels, smashed plaques with the names of villages listed on blackboards, tore down lamps, and destroyed the pedestal of the Bitter Memory of Childhood sculpture.

At the same time, ‘The Girl with the Ears of Grain’, or, as we recently learned from the National Police, ‘Oksanka’, is perhaps the most important symbol of the museum, which is familiar to everyone who enters the museum,” Olesia Stasiuk, Director General of the Holodomor Museum said.

We remind that on the night of August 21–22, vandals attempted to destroy the sculpture on the territory of the National Museum of the Holodomor Genocide. However, the sculpture was not seriously damaged.