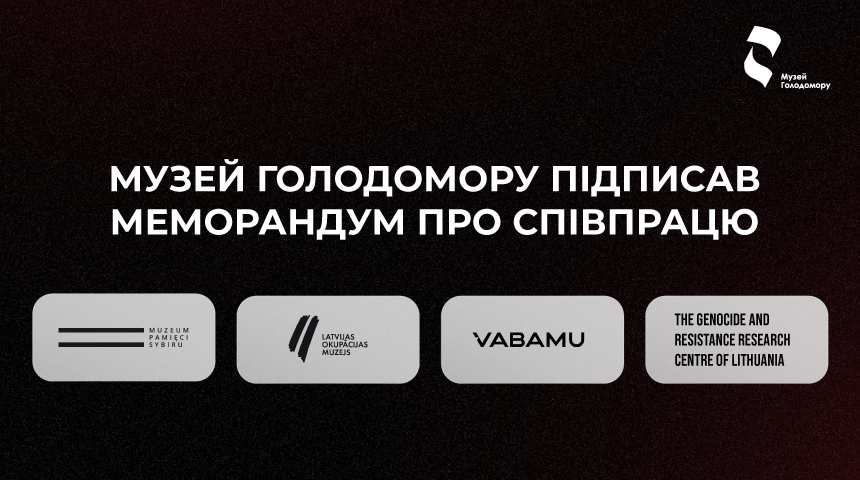 The Holodomor Museum signed a memorandum of cooperation

On Tuesday, December 20, the acting General Director of the National Museum of the Holodomor-Genocide, Lesia Hasydzhak, signed the Memorandum of Cooperation with the museums of Poland, Latvia, Lithuania and Estonia.

The partners of our institution within the framework of this document will be the Polish Sybir Memorial Museum in Białystok, the Museum of the Occupation of Latvia, the Genocide and Resistance Research Centre of Lithuania and the Museum of Occupations and Freedom “Vabamu” (Tallinn, Estonia). The participants of the Memorandum will join their efforts in order to spread the truth about communist crimes at the international level: genocides, deportations, and repressions.

These museums have collected a sufficient base to tell about what their peoples experienced during the Soviet occupation. Unfortunately, information about the crimes of the communist totalitarian regime against Ukrainians, Poles, Latvians, Lithuanians, Estonians and other peoples is often not well known outside the countries represented by the participants of the memorandum.

In particular, the crimes of communism were not condemned by the world community. Moreover, in some places, representatives of influential political parties and movements romanticize and whitewash the communist regime in the USSR.

Regrettably, at the cost of thousands of human casualties and destruction, Ukraine has seen what tolerance of evil and lack of punishment for criminal regimes leads to. Modern Russia, inspired by the “successes” of Stalinism, commits the crime of genocide already in the 21st century and threatens the entire world. That is why today it is so important to debunk Soviet lies and myths and to spread knowledge about past crimes, the consequences of which were the crimes of today.